Hello and welcome back to the Cover Up! Today we will be looking at the current version of the Dungeons and Dragons Players Handbook in 5th edition. This was only released 2 years ago, with a public beta opening back in 2012. In that time it has found its way into the hands and selves of many RPG Fans. So let’s get to the cover!

Of course the first thing I notice in this image is the use of colour. Most prominently It makes heavy use of Yellows and Oranges. These two are both advancing colours, which means that they appear closer to the viewer than others. This is very well used in conjunction with the dark, receding (making it seem further away) colour of the giant’s skin. By using bright orange in the eyes and beard, it immediately creates a contrast which catches the viewer’s eye. This effect is also helped by the fact that the Giants head has been roughly positioned in the visual center of the image, where the Human Eye will naturally look first. 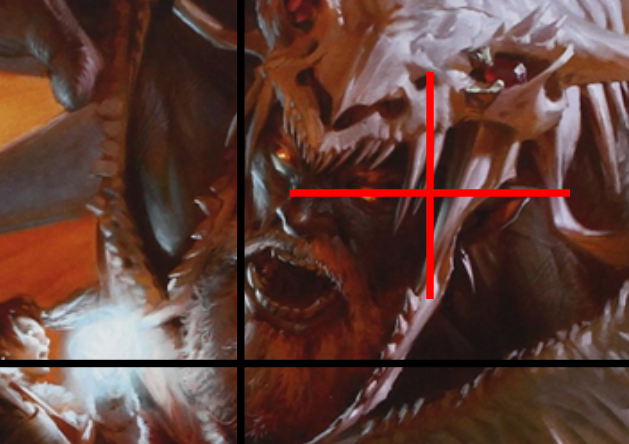 Another way is which the image makes a good use of colour is through the Spell the Mage is casting. Blue does not appear anywhere else on the image, and the only colours as bright are the contrasting oranges and yellows. This decision to use a colour that does not fit in the colour palette of the image puts across that Magic is otherworldly, almost out of place in the world.

The Mage isn’t just there to provide some fancy blue lights; she’s an integral piece of the motion within the image. The cover portrays a snapshot of a tense battle, but at the same time has to put this across in a still image. It does this by allowing the viewer to piece together the sequence of events that led up to this moment, while at the same time allowing us to get an impression of what will happen next. The sparks from the Giant’s sword shows he swung, the Mage’s leap shows she dodged, while the Giant’s hand shows he’s ready for another attack. This creates a tight image, while not letting itself to get bogged down in detail.

One decision I can appreciate in the cover is choosing to go with a Giant as a monster instead of the expected (and somewhat cliché) Dragon. But the series’ namesake does get in, albeit as the Giant’s clothes. The white of the hide does nicely contrast with the Giant’s skin though, and I do like the subtle call back to the cover of the very first Players Handbook in the gemstone eyes in the skull’s eye sockets.

One detail I completely missed the first time I looked this over was the characters in the image. In the background a dog like creature looks on, while in the very foreground a green clad elf stands ready to attack. Being dressed in a receding colour, as well as being cast in shadow means that he is very easy to miss. These two figures, plus the various parts of focal figures going of the page, make it seem this more like this is an already existing image cropped to be the cover rather than a purpose made one. But to be honest that is just a nit-pick.

Overall this cover is pretty good; it effectively puts across the idea of fantasy adventure, while still being unique from what came before it. It’s not absolutely incredible, but it does its Job very well.

But out of all the Players Handbooks I’ve looked at (which you can read here, here and here), which one is my favourite? That honour would go to the 2nd edition incarnation of the book. The way it easily conveys a sense of action and motion while not becoming too crowded wins it for me, alongside it’s use of colour.

Well that concludes our look at the Players Handbooks that have graced our tables over the years. While The Cover Up will return, I have to take a small break as my USB decided it would be brilliant to become corrupted. As that’s were I’ve stored new editions of The Cover Up I will have to rewrite the next couple of week’s content. That will teach me not to back up my files. Anyway, I will be back in 2 weeks’ time with a look at the box art of The Resistance.