Welcome to our top 50 games list for 2018, in which I list my personal top 50 games at this point in time.  My choices are not limited to games from this calendar year, but instead, represent my current thoughts on the top 50 games to me.  Next year, some of the games featured may move up and down as my opinions change and I get the chance to play more games or revisit old favourites.

Liking both word games and deck builders, Paperback – the marriage of the two – was a no-brainer for me.  As in other deck builders, you are working to build an engine with your deck, but in Paperback you are not just trying to play a series of optimal cards to give you currency to buy effective action cards and valuable points cards.  I mean, you are doing this, but your cards are also letters and combinations of letters that should spell out words.

I like the form factor of this game, being the same size as a deck builder toolkit for Magic and yet fitting in a deep, fun experience.  The visual design is clear and simple.  There’s no art on most of the cards, except for the points cards, which are imagined as book cover from various genres.  This lack of visual generosity would bug me in another deck builder, but it works here, with each card only representing a letter or group of letters.  It actually helps maintain clarity. 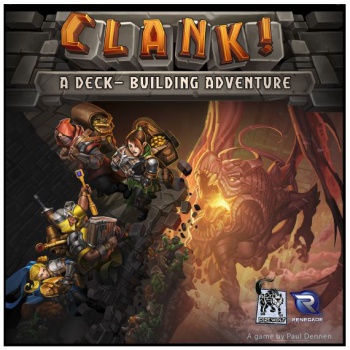 Clank remains a great game.  Like Paperback, it’s a union of two genres that I really like.  This time, those are the deck builder and the dungeon crawl.  It works really well, with the engine you build with your deck coming to represent your hero and his or her capabilities.  Focus and optimise your deck for a focused and optimised hero.  Fill it with random nonsense and get… well… not that.

The game has slipped for me as it has gotten a tad repetitive.  I loved the deck building, but the dungeon crawl has not held up for me.  Maybe it’s just that it’s the same 2 maps, over and over.  There are expansions with new maps, but when I’m not wild about a game I’m less keen to pick up the expansions.  I do still like Clank.  I love it.  It’s just not one I will reach for quite as often as I did last year.

A perennial favourite, I love this social deduction game.  In The Resistance you make up teams to carry out missions.  Once a team is established, members may allow the mission to succeed or force a failure.  Obviously, as a loyal member of The Resistance you want all of the missions to succeed.  The thing is, you’re not all loyal members of The Resistance.  Some of you are filthy spies who will be secretly forcing failures.  As the game goes on, it gets harder to form teams as accusations fly about who is sabotaging the team.  It’s great.

This continues to be a go-to game for large groups.  You can play quickly, squeezing a game into half an hour or less, or play multiple games, allowing players to start looking for tells and hints about other players.  This is my preferred way to play, by far.

27: A Game of Thrones: The Board Game 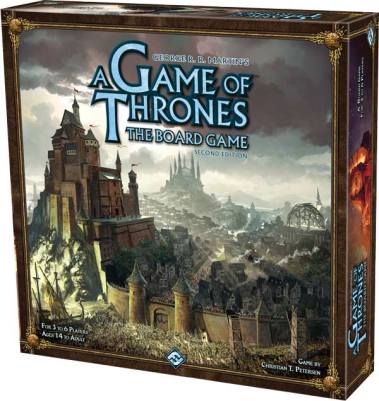 It’s odd that a 7 year old game suddenly gets its first big-box expansion, right?  I mean, as a life cycle for a game, that’s not normal.  And yet it is where we are with AGoT and the newly released expansion.  Odd, that.  I’m keen to pick it up, though.

This isn’t a game that makes it to the table a lot, but when it does it’s a real event.  It’s a great experience that pits up to 6 players against one-another in some pretty bitter fighting over very limited resources.  The game often starts off quite quietly as players build up and ready themselves before exploding into open combat.  The character cards also add a really nice twist onto this combat, making it a little less formulaic and unpredictable.  I’d love to have a similar game that is optimised for a slightly smaller player count.

This is the game that knocked Battlestar Galactica down the rankings.  First up, I really like the Android setting.  The body of artwork that Fantasy Flight amassed for their work on the now-discontinued Android: Netrunner is simply stunning and, I hope, will see significant reuse in future games in this setting.

New Angeles is all about negotiation and I love it.  Players each take the role of one of the major corporations (or a federalist infiltrator looking to sabotage the game) as they work together to meet the needs of the city and jockey for influence within it.  They bid to be the player to launch specific projects aimed at optimising or adjusting the production in the city or just for personal gain.  I love the interactions, negotiations and backstabbing that the game fosters.

This is actually the only hidden movement game I’ve played.  I have Fury of Dracula, but it’s yet to make it to the table.  I continue to really love Specter Ops, as it does something that no other game in my collection does.  It’s a great all vs one experience, with one player taking on the role of a secret agent, fulfilling objectives in an enemy facility before trying to escape to safety.  The other players are hunters, trying to find and stop (read: kill) the agent.  All player characters have unique powers that can impact hugely on the game, and the agent also gets to take some equipment cards, further adding to their arsenal of options.

There are all vs one games where I only really like to play as one of those sides, but this is not the case with specter ops.  I enjoy playing as the agent, working away on my paper version of the board, trying to work my way past the opposing players, but I also really love hunting the agent down, working with others to spread out and cover the enemy’s likely routes and shoot him full of holes.

It’s monster-Yahtzee, essentially.  I continue to like playing King of Tokyo.  I mean, it’s not one of my favourites, and it’s rarely my absolute first choice, but it makes it to the table a lot.  For added depth, there’s the Power Up expansion, which makes each of the monsters unique, rather than just being a batch of reskins of mechanically-identical player characters.

Notionally, I’ve been playing 40K for years, having gotten into it at around the transition from 2nd to 3rd editions.  I maintain that the 2nd to 3rd ed. jump was the biggest that the franchise has seen, but the jump from 7th to 8th was pretty big, too.  And, man, I love 8th.  It’s got me actually wanting to play 40K for the first time in years.  I’ve built out more of my Tzeentch Daemon army that I started for Age of Sigmar and have taken it to the table repeatedly throughout the year.

I like that it’s a game I don’t struggle to get to the table, like my other miniatures games.  There are people to play.  The models are also beautiful.  Games Workshop are really consistent in their quality and the company seems to be doing major work to rebuild their brand and the trust of their fans following years of stagnation.  If you’d asked me last year if this would appear on my list, I’d have scoffed, but here we are.

The ultimate example of a solid gateway game, Ticket to Ride continues to make me happy in my heart.  We’ve picked up so much of it!  The original game, Europe, Rails and Sails, Germany, UK and Nordic.  Nordic is my favourite map, so I’ve used that as my example edition for this entry.

I love that I can break this out with any group and it just works.  I love that This is a game my wife will play, my gamer friends will play and my parents will play.  I love that it’s just so beautifully produced.  I will, at some point, pick up more of the maps, but I don’t even really need them.  I’d be happy playing the original version over and over and over again.  The maps are just gravy.

The best thing about Codenames is the frustration it can cause.  That sound counter-productive, but it’s true.  When I disagree with my mother-in-law one of us will, in jest, bring up an infamous moment from a game of Codenames where we were unable to see the same clues in the same way and got frustrated with one another.  I like that the game can foster these sorts of events and callbacks.

It’s fallen a few places as I’m more used to the game now.  It’s not as prominent on my table as once it was, and that’s ok.  If you love a game and play it constantly, it’s normal to get a bit burnt out on it.  I still love when this game gets to my table, but I’m also glad that it now does so a little less frequently.