Libellud releases Rebellion expansion for Dice Forge – In this year’s top 50 list, I ranked Dice Forge at number 49.  I explained that Dice Forge is a good game, but that it just does not have enough variant options within the box to really make it replayable in the long term.  It’s almost as if it needs, like, an expansion… OMG look:

I’m hoping that this box, packed full of new cards, dice faces, titans and more will be the answer to my wishes.  I want to play more Dice Forge, but I want variety.  This box should hopefully bring that.  Roll on, Rebellion!

Forgeworld puts out new Night Lords – When I first started playing Warhammer 40,000,  I picked up some Eldar, painting them up as Ulthwé.  Not long after, I switched to Chaos, which was my army for a long, long, long time.  Like 15 years sort of time.  I recently got rid of my Chaos, as it was in a state of disrepair and was a bit of a mess.  Maybe someday I’ll do a few Chaos minis again.  Kill Team might be a good opportunity, there.  My first Chaos Space Marines were all painted up as Night Lords and they remain one of my favourite Chaos Legions.  Now, Forgeworld has some new Night Lords, including this handsome chap:

This looks great, bringing in classic design elements for the legion, but managing to make it looks less… well… goofy, I suppose.  The bat wings were always a cool idea, but they’re not always well executed.  The variant head/helmet is also cool.  The model looks brutal!

Evil Hat puts out prototype edition of the Fate Space Toolkit – Evil Hat remains possibly my favourite current RPG company.  Modiphius and Mongoose are just a little behind them in my heart.  Their FATE system is fantastic and the new system toolkits have been really good.  This latest offering looks interesting, but Evil Hat is taking a slightly different approach to the release: 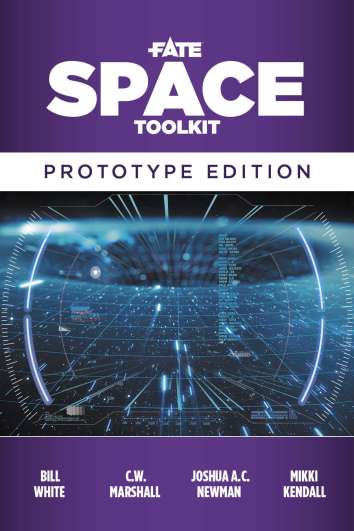 So, a few months ago Evil Hat announced they were paring back a little.  With money concerns, they were letting go of some senior staff and delaying or canceling some projects.  This project was retained, but there was no money for artwork.  As such, they decided to put out the PDF without art and then use the money from the sales to commission the required creative input.  The plan is then to upgrade people’s PDF purchase to include the purchased art.  I hope this works out for them because I really want Evil Hat to do well and to keep producing awesome books.

DeepCut Studio releases Aleph-themed mat for Infinity – Aleph!  Woot!  I featured Deepcut’s first Infinity-themed mat in last week’s 5 on Friday and here they are already with another offering.  Being Aleph themed, it’s also one that I’d be a lot more interested in purchasing: 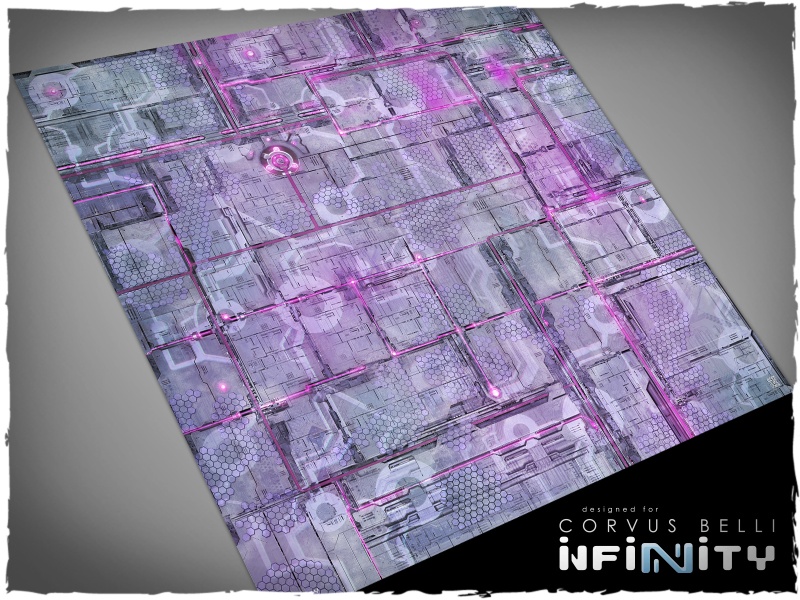 Beautiful pink techno-awesomeness!  This looks great!  It’s not too different to other techy mats I’ve seen, but the colour palette is really different and I love the little hex designs.  Really nice, unique mat.

Games Workshop releases new Carrion Empire box set – This is the real highlight for me this week.  Age of Sigmar has been a bit of a revelation for me, bringing me firmly back into the Games Workshop fold.  It’s turned me back into a total fanboy!  Now, here comes this fantastic box set:

Skaven!  Skaven!  I love the Skaven.  They were my army in Warhammer, back during the old movement trays and blocks of troops days.  I remember fielding ridiculously big units of slaves who would just die in droves whenever the enemy sneezed on them.  Good times!  Now, the Skaven are coming back! 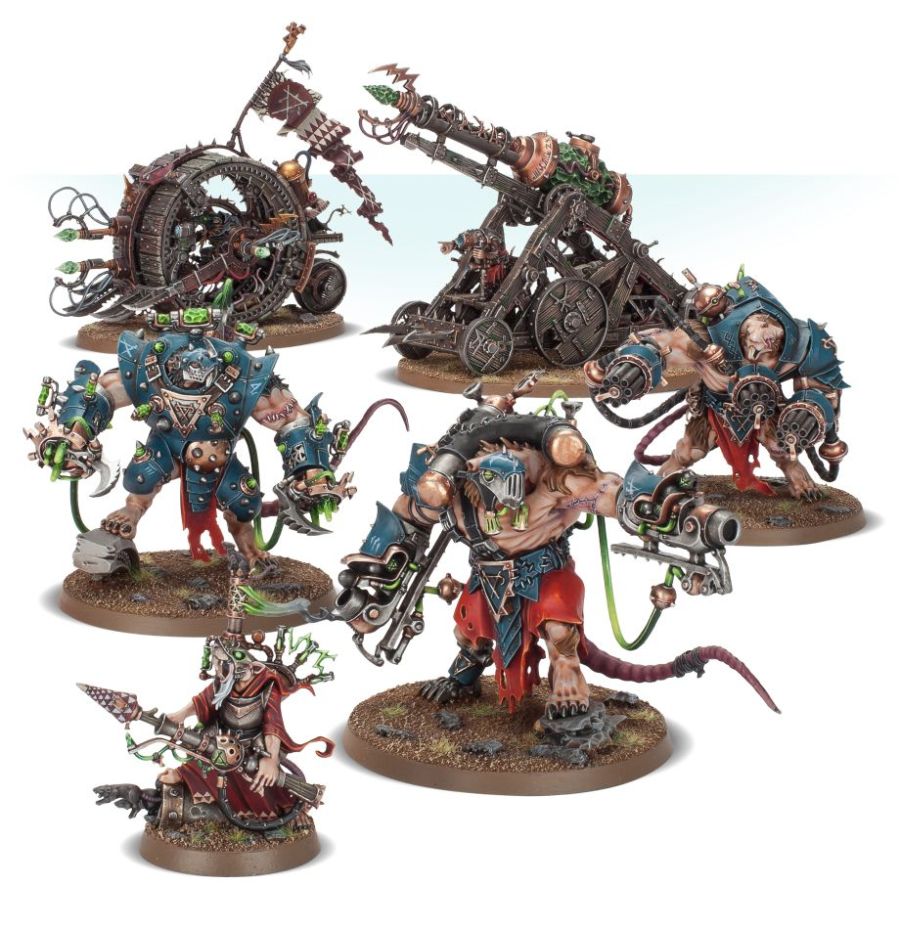 It’s odd, as a Skaven player, so see a see a box set where the Skaven models are so hugely outnumbered!  There are so many ghouls in this book and comparatively few Skaven, but the ratmen in here are certainly big boys!  I love the Stormfiend models but have never owned any.  They came out after I’d already stopped playing.  These, coupled with the Engineer and the other Skryre devices make up a really cool, thematic force.  Two of these sets would be a great start to a Skryre army…

These dice are also being released at the same time.  I think they look really sweet!

So cool!  It’s the first time I’ve really been tempted by a set of GW dice.  They remind me of the Nurgle ones from a year or two ago.

Games Explained: Sekigahara by Matthew Calkins & GMT Games @ Katie’s Game Corner – Sekigahara is a game that I picked up not long after release but have yet to play.  I sometimes find it tricky to get GMT games to the table.  I think they look a bit dry to some people.  It’s a pity, as they’re usually pretty great.  This article runs through the game, giving you the gist of how it plays and giving the author’s opinion of the game.  There are also some really nice pictures attached.  I need to get this to the table…

Dragon Rampant: Skirmish at the Manor @ Comrade’s Wargames – I just love the pictures in this article.  So many well-painted models, all set out on really beautiful terrain.  I’m very jealous of the author’s setup.  The article itself is interesting, too.  The author is playing Dragon Rampant from Osprey.  This is really interesting to me, as I love the various Osprey titles and this is one that I’ve been curious about, so it’s cool to read about (and see, via pretty pictures) it being played.  Also, again, I love Skaven, so it’s cool to see some beautifully painted ratmen on the table.

Euro-what? Amerithrash!!? @ Patrick’s Gaming Blog – Some people take these labels of Eurogame and Ameritrash (or Amerithrash) very seriously.  I’ve seen many arguments on Board Game Geek and other sites.  In this article, the author takes a look at the two terms, breaking down the criteria that could be associated with each.  There are also some examples of each category and, interestingly, some games that the author considers to be hybrids, containing significant elements from both domains.

Last night a board game saved my life (from boring TV) @ Jason Webber Blog – I like these types of articles.  You know the ones I mean.  The sort where people just share why they love the hobby and what they really enjoy about modern games.  The author of this article does this really well, outlining the hobby itself, the experience of getting back into gaming after a long break, and how he has integrated the hobby into his life, now.  A good, uplifting read.

King’s of war log @ Pete’s Hobby Corner – That’s a lot of Elves!  It’s nice to see someone working on a High Elf army, and it’s cool to see the different generations of miniatures represented in the author’s force.  He has a big job ahead of him rebasing that lot, I can tell you!  I don’t agree with the author on Age of Sigmar being ‘tragic’, but I definitely sympathise with him on the frustration of an entire army being basically dropped by GW.  Had this myself with my Bretonnians.  It does such.  But I can respect his opinion on AoS and at least he’s getting to use his models for another fantastic game in Kings of War.  Good luck with the army and make sure to share progress pics!

This week on No Rerolls we’ve shared some Shadowrun-themed Bundles of Holding, looked at a selection of banner from this very site.  We also wrote about a classic Paranoia supplement.