The vast majority of the available material for the fifth edition of Dungeons & Dragons is set in one place: The Forgotten Realms.  That has been the major setting since the third edition and it’s the only show in town in the current iteration of the game.  Oh sure, there’s some mention of some Greyhawk content in the Ghosts of Saltmarsh book, and the Curse of Strahd book takes you to the classic Ravenloft setting, but beyond that, it’s Faerun all the way.  There’s even been a Sword Coast Adventurer’s Guide for players looking to play in the most famous region of this most famous D&D setting.

This is not necessarily a bad thing.  It makes sense to take the popular, well-developed setting and run with it.  For many people, it doesn’t really make a difference and it may as well be any generic fantasy world.  For many others, they love the setting and are always happy to see it expanded on or further elaborated.  That’s most of your D&D customer base covered in those two groups.

And even to me, I’m not really interested in covering more fantasy settings.  I could not care less about Dragonlance or the Points of Light setting developed for the fourth edition.  I care not a single jot for Greyhawk or Lankhmar.  They all had interesting quirks and I’m sure they have their own rabid fanbases, but I can see why Wizards of the Coast would not necessarily put out another fantasy world when they already have one that is well-developed and supported.

So how, then, to introduce new settings without detracting too much from the overall Forgotten Realm-centric release schedule?  Well, I think the approach already taken, of single-book releases, is the way to go.  We’ve already had the Curse of Strahd book and the Guildmaster’s Guide to Ravnica, both of which explore new settings – Ravenloft and Ravnica/MtG, respectively – and both of which have only been single-book releases.

In the case of Strahd, this was an adventure book.  It had a set story and a clear set of events, locations and objectives.  But it also set the players up in a sandbox – one that could be used as a jumping-off point for your own adventures.  It very much gives you the setting.  Ravnica, on the other hand, is a more traditional campaign setting sourcebook, giving you lots of information about the setting, character options specific to the setting, guidance for creating adventures (rather than an actual adventure in itself) and statblocks for setting-specific NPCs and monsters.

I’m happy with this approach.

The four settings I’m going to suggest for a similar treatment will come as no surprise for a seasoned D&D fan as they are very much the “standard answers”.  They are the settings that will be yeared for by most fans of some of the older, weirder content that TSR used to put out.

Let’s just cut to the chase, shall we? 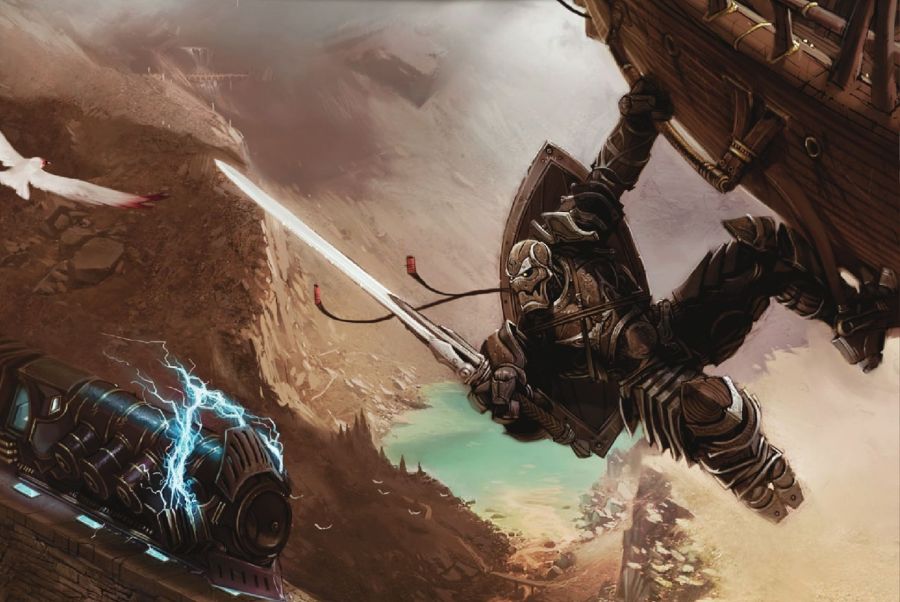 Of my four settings, the is the one that is both the most recently used by WotC and the one that we know will make an appearance in the near future.  There’s been a PDF-only sourcebook put out, but it’s one that I’ve yet to read and – call me old fashioned – I’ll care when there’s a hardback sitting on my shelf.  Perhaps this is an unfair statement, but it’s true.  The majority of players will likely not purchase a PDF book and will wait for a nice hardback book.

My old copy of the original campaign setting book is well read, as I found the setting to be incredibly interesting and engaging.  I have read it cover to cover and back again.  I embraced the ideas and love the aesthetic and themes.  Warforged are my favourite D&D race and my current character in my Ravenloft campaign is, as a burly Warforged paladin, something of a curiosity in Barovia.  So much win in this book!

I’m told that Wizards have suggested that a hardback book is coming.  I do hope that this is true and I very much look forward to diving headfirst back into this world.

Because of the broad themes and wide potential for this setting, it’s also worth mentioning that this is the book that I feel needs the Ravnica treatment.  This needs to be a pure setting book, with lots of setting info, character options, spells, NPCs and monsters.  Other settings might work well as adventure books, but this needs a little bit less focus and should just work to set out the world as clearly and as widely as possible.

It should tell you how closely I followed the fourth edition of D&D that I didn’t actually realise until researching this post that there had been a Dark Sun release for fourth edition.  Woops!  That does actually fill me with a bit of hope, though, that this might be revisited in the next few years.

Dark Sun is a darker, grittier setting for Dungeons & Dragons, taking place on a magic-ravaged desert world that is incredibly inhospitable.  The desert is scattered with city-states, each more corrupt than the last and villains of the setting are often magic using sorcerer-kings who use magic to keep their underlings in line.  The people are desperate and as harsh as the land in which they live.  Metal is also a rare commodity, meaning that weapons and tools are often made of wood or bone.  This can mean that your weapons are not particularly durable, adding another risk to combat encounters.

Dark sun, unlike Eberron, is one that I would be quite happy to see released as a Curse of Strahd-esque adventure.  If WotC were to take a similar approach in setting up a sandbox style setting and weaving an adventure around it, I’d be quite happy.  Maybe a quest of vengeance, or for power and control over one of the city-states?  Maybe both!  Throw in a few character options for races and some variant classes and you’ve got a solid book on your hands.  The adventure could be an epic tale, much like Curse of Strahd, but by setting up a sandbox, the book would also be useful for the DM looking to run their own adventure in the setting.

I just want a really brutal, unforgiving and, dare I say, cruel D&D setting.  It shouldn’t be the default, but it would be a very nice option.

I really like the concept of Spelljammer, but I hesitate on calling it my favourite setting only because of the incredibly high quality of some of the other settings.  I’ve enjoyed no other campaign as much as I have my Ravenloft one, and I’ve always been in love with Eberron, but Spelljammer… 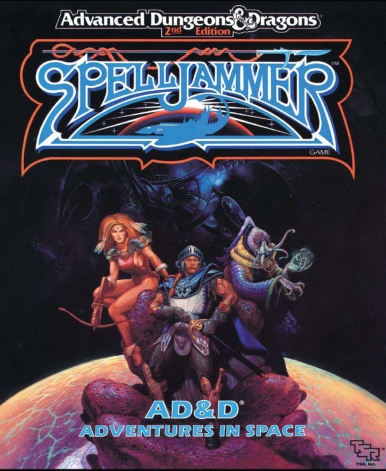 Well, Spelljammer offers things that no other setting offers.  It takes place in space, but it’s definitely not a sci-fi setting.  It’s very much space-fantasy.  Players travel in ships through space, but not an empty void like the space that we know.  This is the phlogiston, the unique element that makes up the great ocean among the stars and fills the space between the crystal spheres.

The crystal spheres each contain a planetary system, several of which house the other campaign settings that feature in D&D.  This is a feature that could stay or could go, depending on how Wizards want to run their cosmology these days.

I’ve run a little bit of Spelljammer with an after-school group.  I gave them a choice of settings and I really did not expect them to go with Spelljammer.  It’s very much a product of the 80s and I didn’t think that would appeal to them.  I was clearly wrong and we had a lot of fun on the Rock of Bral.

Given that there’s a nearby locale called Braal, we adjusted the name appropriately the sake of local flavour.  It definitely added to the fun.  The group took really well to the setting and the campaign featured a lot of swashbuckling, campy action and daring adventure.  I found they got into this setting a lot more than they did with the Forgotten Realms.  I think they saw Faerun as a generic fantasy setting – perhaps unfairly – but really dug the unique properties of Spelljammer.

I’d love to run more of this campaign and I think this, like Eberron, deserves the Ravnica-style setting book treatment.  There’s enough variety in player races, new concepts, bestiaries and locations that such a book would be the obvious way to go.  I’d love to see sections on the Phlogiston, the spheres, ships, ship combat and more.  I know I buy all the 5e books, but this would be a firm preorder and I’d pick up so many of the accessories and things that come with these releases.  Miniatures, DM screen, cards… all for me!

Finally, a fan favourite among fan favourites.  I think for many people their first experience of the Planescape setting was not through the tabletop game, but rather through the video game, Planescape: Torment.  The was an absolute classic and remains a very popular CRPG.  It’s actually one that passed me by until recently and I’m playing through it for the first time at the moment.  I am very much enjoying myself with it.

The setting consists of a multiverse of different planes and sees you, the player, travelling between them, exploring and adventuring.  It’s quite a complex setting and I don’t feel that I am informed enough to really describe the guts of it, but it’s that complexity that also fascinates me and makes me want to delve deeper. 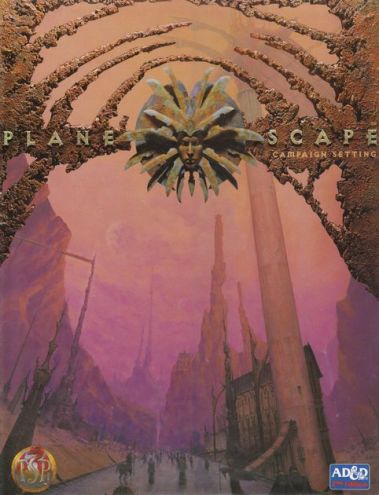 A major element of the setting is the city of Sigil, also known as the City of Doors.  It’s the centre of the setting and has a high concentration of planar portals.  It’s also what I’d base any book around.  I think that, given the complexity of the setting, I’d do the Strahd approach on this one.  I’d establish the setting through a set adventure.  Again, the sandbox would be established in a limited way where the rules of the setting and the key locations are established through a sandbox-style campaign and DMs can run this adventure or use the resources from the book to come up with their own adventures.  There’s a lot of scope here.

As I mentioned at the start of the article, I don’t think the four settings here will come as much of a surprise.  These are the four settings that most people would give when describing the settings they’d love to see revisited.  Of the four, the one I am shakiest on is Planescape, but it’s my lack of knowledge, coupled with my awareness of the depth and complexity of the setting that really makes me want to play it.

These settings are all also different, each providing a unique experience for the player, rather than just throwing fantasy setting after fantasy setting at them.  Each of these settings would establish a genre in their own right.  I know that some people will disagree on my approval of the Strahd-style adventure/campaign approach to these books, but I think it’s an approach that would work by giving a focus to settings that need it.  Of course, I’d be delighted to get a straight setting book, but the Strahd approach would work for these settings – I stand by this.