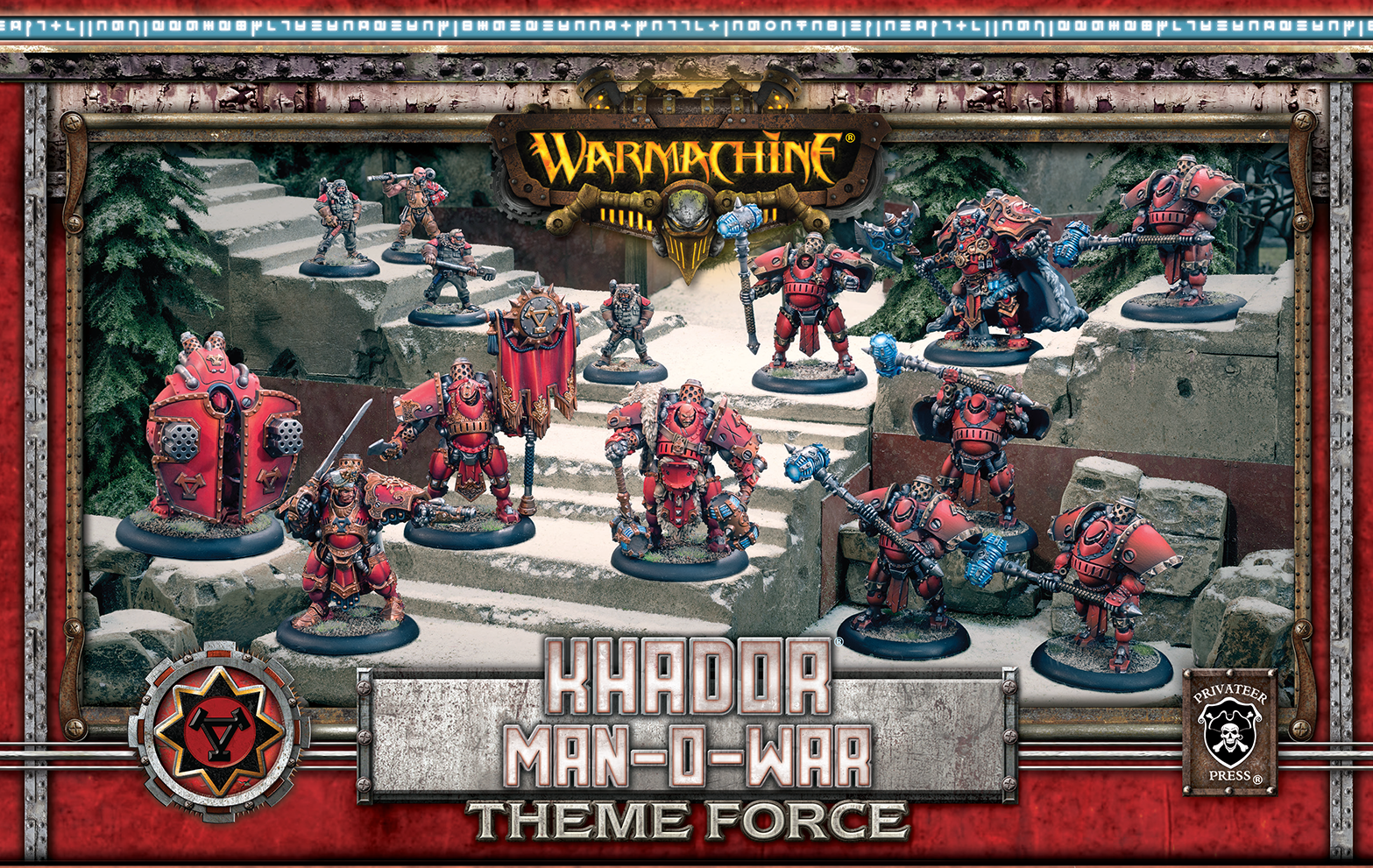 I’ve always wanted a Warmachine or Hordes army.  I actually have a fair few miniatures from this range and have played a handful of small games, but I’ve never really put together a coherent army.  Also, if I did do an army, I wouldn’t want a big, all-encompassing force with everything the faction has to offer.  No, I’d go for a themed force.

Themed forces in Warmachine and Hordes are armies that are built around a particular idea and are limited in their recruitment.  This is a tradeoff that sees the player get theme-specific bonuses in exchange for the limitations they accept.  Themed lists have gone from being an interesting option to, in the current edition, the default state of list building.

So, let’s take a look at some of the themes that really appeal to me.  I will not be doing a full look at the forces and the various bonuses you get for adopting a theme, but rather just my own thoughts on making an army along these lines.  My judgments are largely based on the visual appeal of the army because, hey, that’s what I like and it’s what I’m here for.

We’ve previously taken a look at a few themed forces from the Cryx, so this time let’s take a look at the forces of Cygnar and Khador.  It’s time for little bit of red versus blue!  let’s start with the blues.

Sons of the Tempest

I like Cygnar.  They’re so… resplendent.  There are two particular aspects of the army that I like and, conveniently, both a represented by nice themed force.  The first of these are the Sons of the Tempest, based around the Tempest Gun Mages.  I love the look of this unit and the idea behind it, so it’s really cool to have the prospect of running an army of the chaps.

I see this force as being nimble.  I mean, they’d have to be, with their low armour, iffy stats, low power weapons and difficulties in covering rough terrain…  I don’t know that this list would be competitive, but let’s just say they are nimble.  Yeah.  With that in mind, there’s a handful of Warjacks I’d be interested in taking. 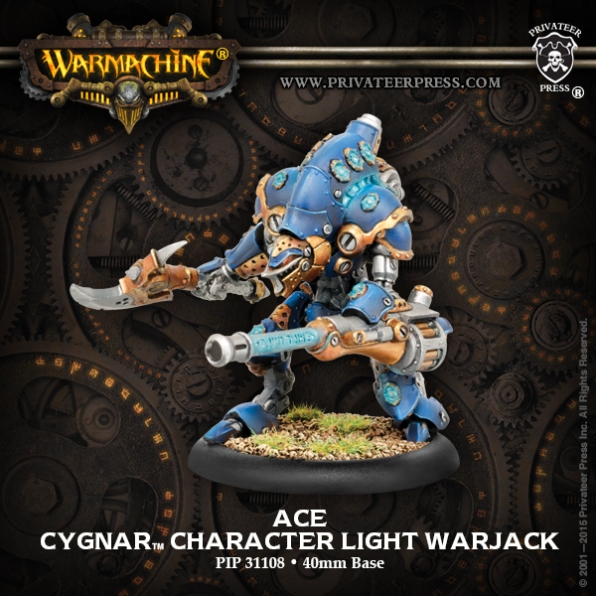 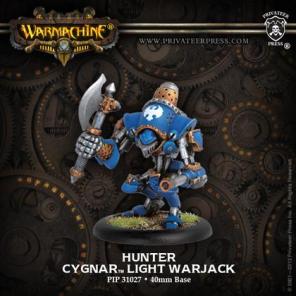 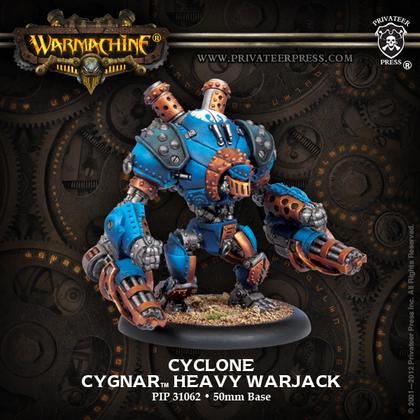 Ace and the Hunter both look the part, with decent rifle-esque guns.  The Lancer is a great Warjack that extends the range of the Warcaster.  I also love the idea of the Cyclone with a minigun strapped under each arm.

The base unit is the core of the army, supported by Riflemen and other interesting solos.  The horse-mounted gun mages are pretty cool and are new models since last time I looked at the range.  There’s also a solo, younger version of Caine.  This represents him before he became a Warcaster.  Worth including if you’re not using him as your Warcaster, methinks.

Speaking of Warcasters let’s take a look at our options.  There are three versions of Caine that may be used, all of which are quite thematically appropriate, if not necessarily the best choices in-game. 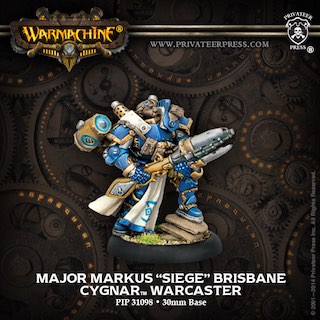 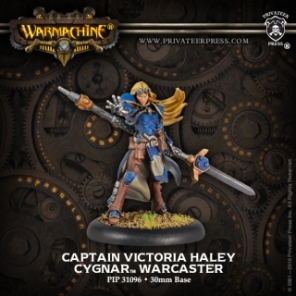 Siege Brisbane seems a more solid choice as he provides a fair few interesting buffs and abilities.  He’s especially good at helping with the defence of your rather squishy troops.  Hayley is also a solid choice and is a classic Cygnar Warcaster.  Her first and second versions bring different benefits to the table, plus it’s cool to see the gun mages led by a woman who is a badass mage herself.

As I mentioned, I don’t think this list is very competitive.  It just seems limited and not very strong.  Visually, however, it’s amazing.  I love the gun mages.  They just ooze cool and they exemplify the Warmachine setting.

The other aspect of Cygnar that I love is all the cool lightning-themed tech.  There are a ton of models that fit this theme, so there’s a lot to choose from and it’s probably going to be a lot more competitive than the Sons of the Tempest force.

In terms of Warjacks, there are a few lightning-themed mechs that very pretty and fit the theme perfectly.  I’d also be more open to including generic Warjacks in this list, as they all kind of look the part. 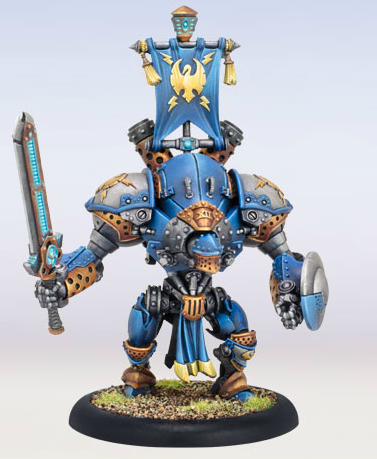 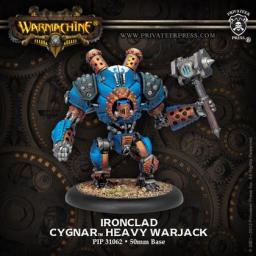 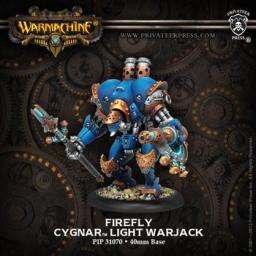 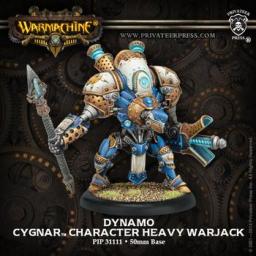 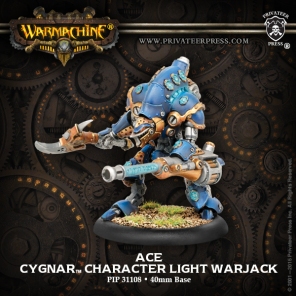 There are a few highlights here for me.  I’d take the Lancer again, as I do love the Arc Node is provides to extend the range of a Warcaster.  As far as the more thematic options go, I love Thunderhead.  The Firefly is also a cool little offering, putting more of the ligthning bolts that make this army what it is.  There are a ton of options available here and I really don’t know enough at the moment to choose with any real basis beyond the visual.

Warjacks aside, there also a ton of other units and solos available for this army.  I particularly like all the heavily armoured ones who carry the awesome lightning weapons.  That does cover most of them, of course. 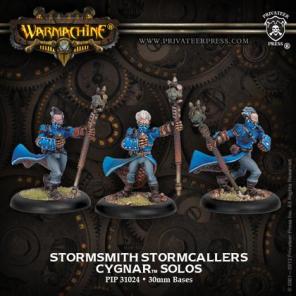 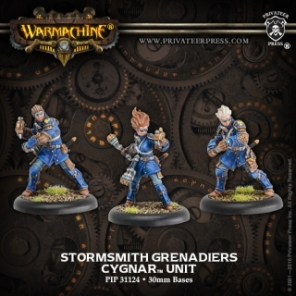 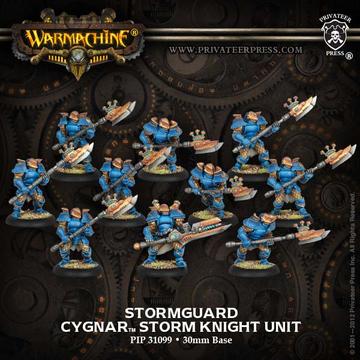 My favourite unit is probably the Storm Lances.  This is a beautiful cavalry unit that also happens to earn you a free model when you field a full unit.  The Storm Knights give a nice infantry core to bolster out the numbers in your force.  Then there are some interesting smaller units and solos.  I like the idea of the Storm Tower weapon team and I love the model for Lady Laddermore.  A knight-themed force would be great to see on the table and a joy to paint.

For leadership, I’d turn to two characters with five different model options.  Namely, these are Nemo and Coleman:

Both are very closely themed around this force.  Nemo is a really cool model in both his incarnations, but I don’t know a lot about how he plays.  Stryker is probably the better match thematically as the Storm Division is his army.  Of the three models, his second incarnation is probably the best fit, buffing the defence of Storm Knights.  His third mini can buff up Storm lances.  Whatever you choose, he works well with this list.  I don’t know which I’d go for.  Probably Lord Commander (second incarnation) if I was running a lot of Storm Knights.

The army is a cool themed force that bursts with character.  it’s also broad, giving choices to make and tactical options.  There are some really well-suited Warcasters and some amazing-looking miniatures.  Definitely a strong option!

Now, onto the proud sons of Khador!

I actually have some painted Khador.  Not much, just the old starter set.  I had a go at doing a snowy base.  That did not work well.  Khador is army full on miniatures that look satisfyingly chunky.  The Armored Korps list even more so.  It focuses firmly on the chunk.

Khador only have heavy Warjacks.  They don’t do light machinery.  I think the bold red carapace helps to sell the chunkiness, making the whole things stand out all the more.  Here are some of the highlights for me: 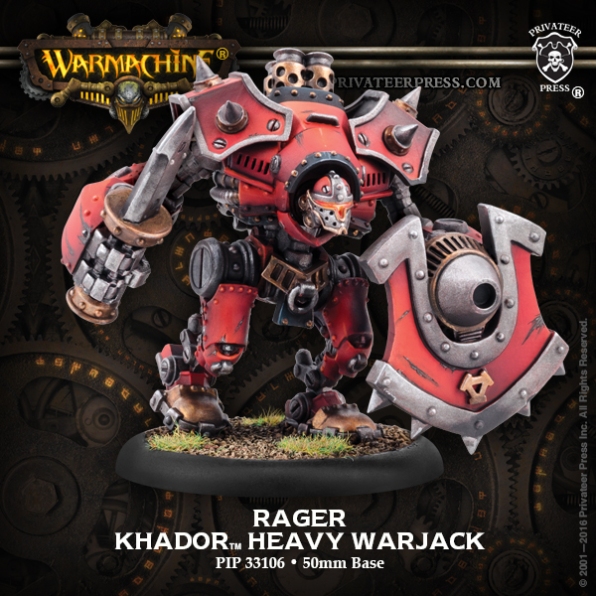 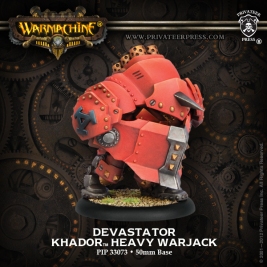 TheRager his the sort of tone that I’m looking for.  The shield is reminiscent of the Man-O-War Shock Trooper shield that will feature heavily in this army.  The Conquest is also a great example of chunk.  It’s a colossal though, so it’s both massive and expensive.  Really, any Khador Warjack would suit this army, given the heavy armour plating they all possess.

So we’re pretty open on Warjacks.  What about units?  Men-O-War are the core of the army.  No question.  They are heavily armoured troops with big, cumbersome weapons. 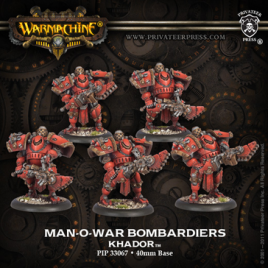 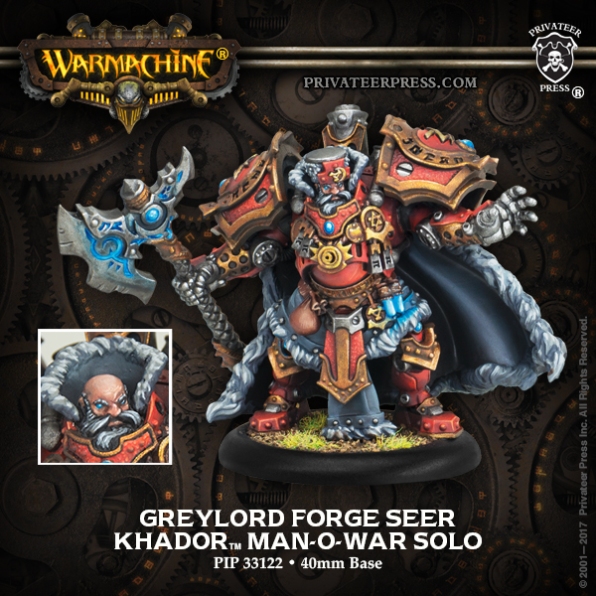 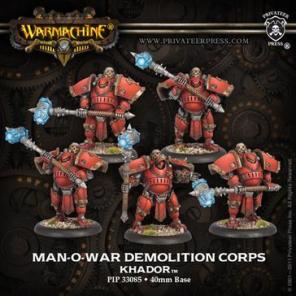 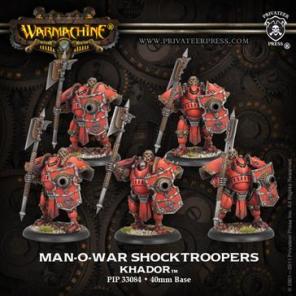 Beyond the Men-O-War, there’s the Siege Chariot.  It’s another heavy, armoured unit.  I really like the armour worn by the horses – it’s my favourite part of the model.  My favourite solo for this list would be the Greylord Forge Seer.  He takes the awesome Man-O-War armour and adds elaboration.  He also comes with two head options but i don’t see why anyone would not take the head with rather spiffy hat.

In terms of leadership, there are a few decent options for Warcasters.  As much as I like the Supreme Kommandant Irusk mini, I worry that it’s not quite armoured enough for this list, just aesthetically.  I do include him though, as I love the mini. 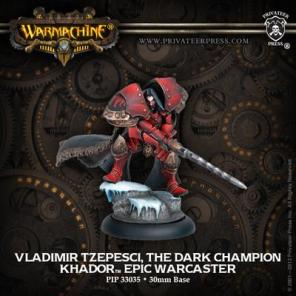 The Butcher and Vlad are both safe bets.  They are reasonably well armoured and are, indeed, big strong men.  Such strong.  Very flex.  The model I would definitely take would be Kommandant Sorscha.  First of all, she fits the theme so well.  Secondly, the miniature is fantastic, combining elements of her classic miniature with the Man-O-War aesthetic.  It just works.

And that’s all for the Khador and Cygnar theme forces.  Next time, I’m going to take a look at some of the other themed forces that appeal to me from other factions.  At the end of all this, I might even pick up the starting miniatures for the theme I end up on.  We’ll see!