I’ve always wanted a Warmachine or Hordes army. I actually have a fair few miniatures from this range and have played a handful of small games, but I’ve never really put together a coherent army. Also, if I did do an army, I wouldn’t want a big, all-encompassing force with everything the faction has to offer. No, I’d go for a themed force.

Themed forces in Warmachine and Hordes are armies that are built around a particular idea and are limited in their recruitment. This is a tradeoff that sees the player get theme-specific bonuses in exchange for the limitations they accept. Themed lists have gone from being an interesting option to, in the current edition, the default state of list building.

So, let’s take a look at some of the themes that really appeal to me. I will not be doing a full look at the forces and the various bonuses you get for adopting a theme, but rather just my own thoughts on making an army along these lines. My judgments are largely based on the visual appeal of the army because, hey, that’s what I like and it’s what I’m here for.

We’ve previously taken a look at a few themed forces from the Cryx, some from Cygnar and Khador and various Hordes forces, so this time let’s take a look at the mercenary forces. Mercenaries are a Warmachine faction from which I have selected two themes.

This force represents the nation of Rhul, consisting mostly of Dwarfs and Ogruns. It’s mostly the Dwarfs that I’m actually interested in though, as I really like their aesthetic.  Short, chunky and heavily armoured!

In terms of warjacks, the Dwarf ones all look great.  I actually have a few of these already from a few years and a couple of editions ago.  I have a few Grundback Gunners and a Ghordson Driller.  I like the rules that go with drill arm. 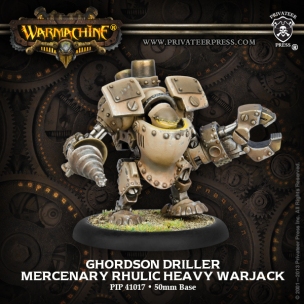 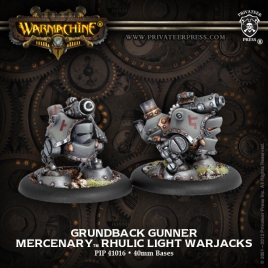 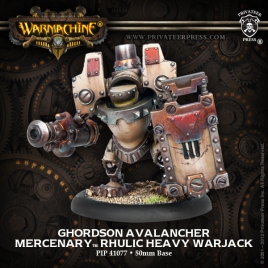 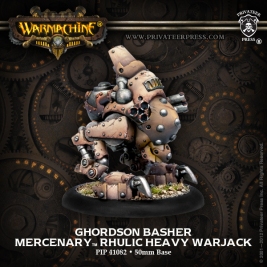 In terms of units, there are lots of lovely, stocky warriors.  There are a few solos that I like too, as well as a really cool battle engine: 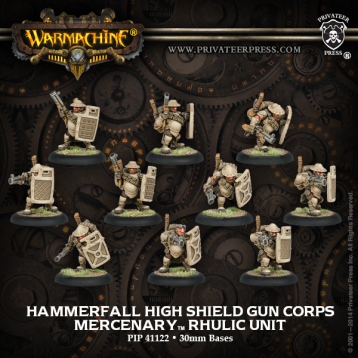 The Siege Crawler battle engine is a really nice model and reminds me a little bit of Metal Slug.  As with the Avalancher, the Hammerfall High Shield Gun Corps all cary big storm shields and rifles.  Clearly this is an aesthetic I like.  I also really like the Horgenhold Forge Guard, what with their cool heavy armour and bigass hammers!  These guys are what I really think of when considering this faction.  A unit of these would feature in any Rhulic force I put together.

When it comes to Warcasters, there are only three to choose from, and I already own one of them!  I have Ghorten Grundback.  His miniature is nice, but he seems the most boring of the lot, gameplay-wise. 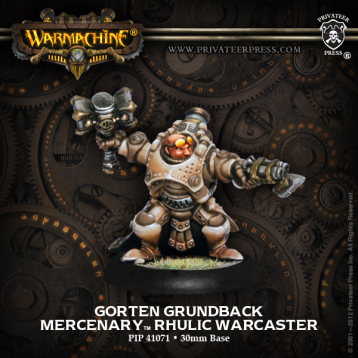 Ossrum is a nice mini.  Clean, simple, characterful.  He’s fine.  I like the Durgen Madhammer miniature a lot more.  He’s just more fun, y’know?  between the big armour with the wee dwarf poking his head out, the huge hammer and the big gun, he’s a comical figure.  All of them are really fitting to the theme and share similar design elements, but this also means there’s less real variety available, as compared to one of the major factions, such as the Cryx or Trollbloods.  Both of those factions have a wildly varied range of warcasters.

All in all, the fact that I’ve got some of the miniatures, and have played with them a fair bit, tells you I already like this faction and have done for quite some time.  What puts me off is the amount of heavy armour that should really be painted in metallics, when I’m keen to use some nice, bright colours.  I mean, I can paint them however I want, but they look like they should be in metallics.

As we’ve previously established, I like pirates.  Unlike the Cryx offerings, these mercenary pirates are mostly alive!  That’s novel.  Perhaps someone could pick up both and do a before and after force!

I love the nautical-themed warjacks that are available for this force.  There’s a real Bioshock, Big Daddy feel to them that appeals to me: 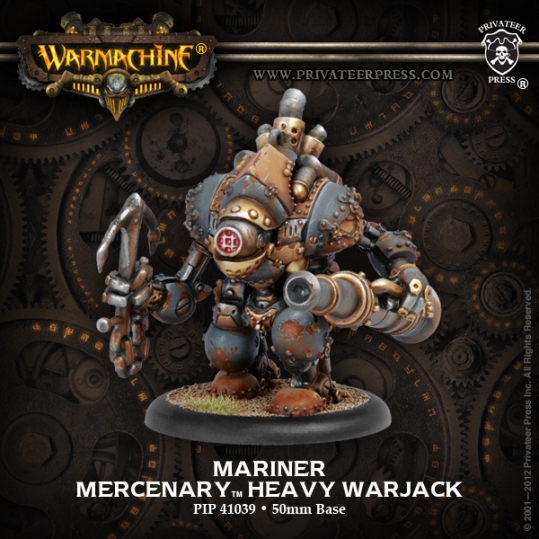 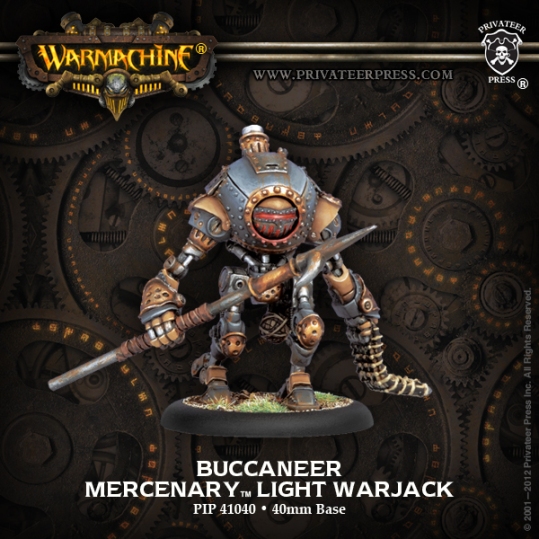 For light warjacks, I like the look of the Buccaneer, armed with a harpoon and net, and the cutlass-wielding Swashbuckler.  They both fit the theme perfectly!  For a very direct, if someone on-the-nose, thematically-armed warjack, there’s also the Mariner.  it’s armed with a small cannon and an anchor.  You know, just in case the theme wasn’t entirely obvious.

The units are also chock-full of character, with lots of great, quirky solos: 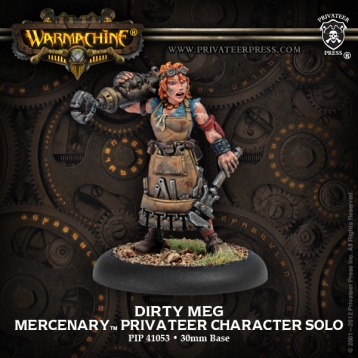 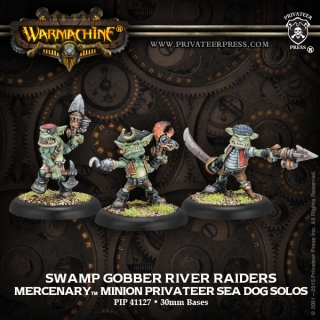 The main unit here is the Press Gangers.  They are just really nice pirate miniatures which would be usable in lots of different games, if that’s important to you.  They’d be an auto-include for me, bulking out the force with troops.  There are some cool solos in here, too.  I particularly like the Trollblood pirate, Bosun Grogspar, Dirty Meg, Doc Killingsworth and the diminutive but behatted Lord Rockbottom.  Lots of fun options to be had!

There are four warcasters available here, each with quite a different look to them: 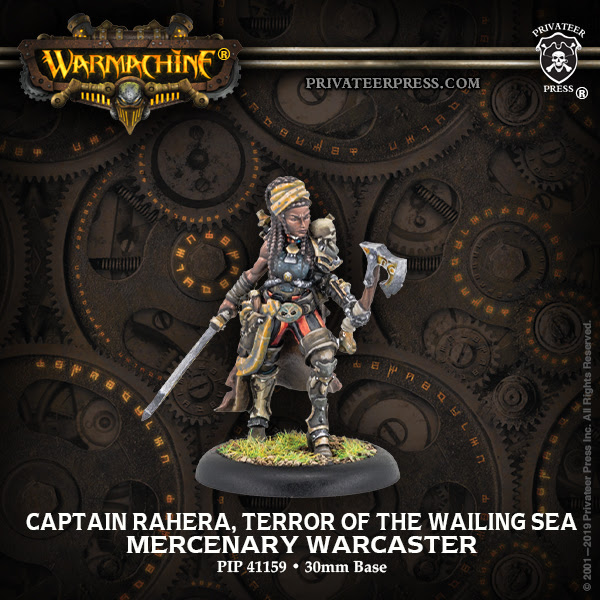 My favourite is Captain Bartolo Montador.  He’s just the classic pirate lord figure and would look great in bright colours.  He’s what I picture as a real leader for a large pirate force.  Phinneus Shae has the appearance of a younger swashbuckler.  He’s more rogueish and muted in his appearance.  Rahera has a bit of the look of Calypso from Pirates of the Caribbean about her.  She’s also the one to go for if you want to incorporate some of the Scharde units from the Cryx into your force.  Finally, there’s Fiona.  Her miniature is pretty cool, but doesn’t quite fit the theme in the same way, at least for me.

So, in terms of units I definitely prefer the Cryx pirates, but I love the nautical theme of this faction’s warjacks.  It’s that Bioshock-esque feel that I really like.  The warcasters are also some of my favourite models, especially Captain Bartolo Montador.  He just exudes the theme!  I’m not sure that I see myself going with this theme, but I do like the miniatures a lot.

And that’s all for the Mercenary theme forces. Next time, I’m going to take a look at some of the themed forces for the Hordes equivalent to the Mercs, the Minions.  At the end of all this, I might even pick up the starting miniatures for the theme I end up on. We’ll see!

2 thoughts on “A Look at Warmachine and Hordes Themed Forces Part 4: Mercs”