As someone who is now firmly working from home, I’m actually finding my days a lot fuller than I’d expected.  I spend a lot of time working, attending meetings, planning and the like.  This is occasionally interspersed with short breaks on YouTube, Netflix or World of Warcraft.  Sometimes, and this is rather novel, I even go outside.  I’ve got RPG groups in the evenings, and I enjoy spending time trying out new recipes and ideas in the kitchen.

I told myself I’d find time to paint.  I wanted to find time to paint.  I remain, as always, the worst.  I mean, it was almost a year ago that I first said I was starting an Adeptus Mechanicus army for Warhammer 40,000.  How’s that whole thing going?  Well, I wouldn’t say that progress has been slow, largely because that would suggest that actual progress had been made.  But, hey, lockdown is my chance, isn’t it?

So, I tidied up the games room (this took way longer than it should have, largely thanks to the power of procrastination), dug out the miniatures, and laid out the paints.  They sat there for about a week, untouched except when shuffled around to make room for work papers, a laptop, perhaps a plate or a cup.  That was until I started to see what my peers were working on…

The Northern Knights, our local games group, have recently started using Discord.  This has been great.  It has facilitated RPGs, helped with boredom or loneliness and, yes, given people a place to share what they are working on.  It was so nice to see what people were working on, and it was incredibly motivating.

First up, one of our regular 40K players has been powering his way through an Imperial Guard army and has been posting regularly on his progress.  It’s impressive to see how much he’s managed to get through, especially in such an infantry-heavy army:

It looks goes, doesn’t it?  I do love the Imperial Guard flying units.  They seem so practical and quite believable, in contrast to many of their strange and wonderful vehicles that inhabit other corners of the 41st Millennium.

Another regular at the club has been working his way through an army of Raven Guard Space Marines.  I’ve long admired this person’s painting, so it’s cool to see this arm coming swiftly together:

You can click here to visit his blog.  He gives pretty regular updates on what he’s doing and shares loads of pictures.  Definitely worth a look.  He also has some good articles on GMing in RPGs which I would heartily recommend.

Finally, and just to help my self-esteem somewhat, others in the group are at earlier stages in their projects.  In this example, the painter is, like me, at the stage of putting down his base colours.  He is making a good start on his new Eldar army: 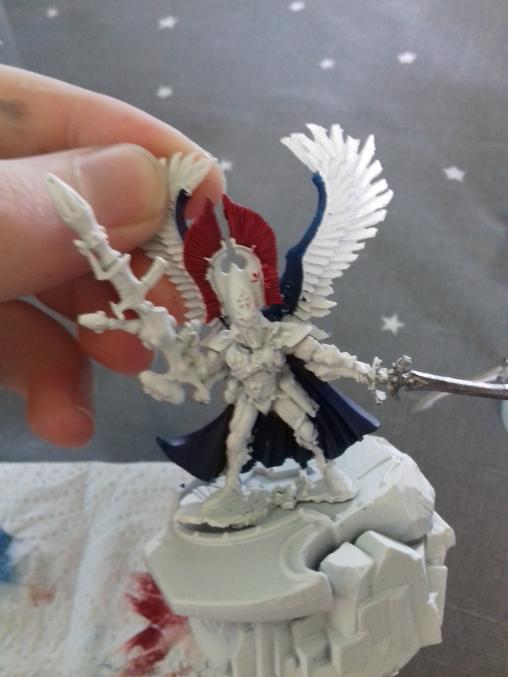 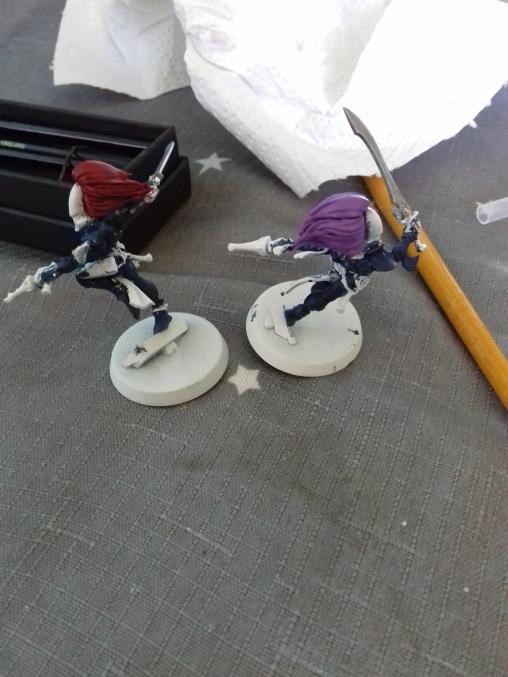 Well, this is reassuring!  It’s not all just people who have already pumped out whole armies.  They’re just starting out, putting down some bold colours. and are just starting out on what will be a cool and exciting project.  I do like the plastic Banshees!

Now, having seen what others have been up to, there is an obvious next question: “What of me?”  Well, seeing all this going on, and casting the occasional glance over at the miniatures and paints that I had so lovingly put out on the table so very long ago, that peer pressure began to kick in.

Peer pressure is so often presented in a negative light, and it can often be a very dangerous and damaging force.  The thing is, it can also be a huge motivating force in the right circumstances.  Seeing others doing well and making real progress with hobby goals that you all share is really powerful.  It’s with this in mind that I actually picked up a paintbrush and got back into painting for the first time in ages:

For me this meant finishing up my red robes, doing the blue trousers (they don’t show up well in these photos) and starting to put down the first of the metallics.  This step will take a long time, largely because it’s so tedious that I’ve been doing it in short bursts.  it turns out (who’d have thunk it?) that there’s actually a lot of metal in an Adeptus Mechanicus army.  Go figure.

I feel good that I’ve started on this, and I’m hoping that I can build up a bit of steam and start working towards really getting this done.  I still have the robots and vehicles to spray, but I’m not even going to look at these until I’ve worked through the 40 Skitarii that are taking up valuable real estate on my desk.

I also think that I might actually move my painting setup to the other end of the room.  I think not having the computer in front of me would actually help a lot.  It would take away a big source of distraction and would also, in this time of working from home, help to physically differentiate hobby time from work time.  Yeah, moving to the other table would probably help a lot.

I hope to have more to share by the end of the month.  By then I’d like to have my metallics down and inked, and my weapons either done or well underway.

Wish me luck!  Actually, no.  Wish me focus!