Welcome to our top 50 games list for 2017, in which I list my personal top 50 games at this point in time.  My choices are not limited to games from this calendar year, but instead represent my current thoughts on the top 50 games out there.  Next year, some of the games featured may move up and down as my opinions change and I get the chance to play more games or revisit old favourites. 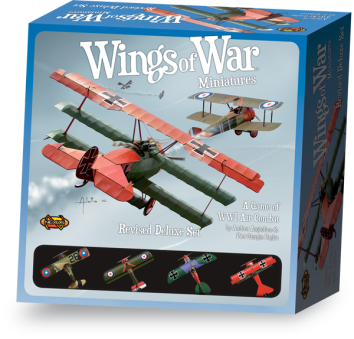 The venerable Wings of War just manages to remain on this list despite being almost completely replaced for me by X-Wing.  Although the gameplay is pretty much identical, the fact that this game manages to maintain a quite different feel is what saves it and keeps it on the list this year.  It helps that the version I have comes with four fantastic little plane models that really add to the overall experience.  If I had a bigger collection of this game, I’d definitely look into getting myself a suitable playmat for it, but with only these four plane it just does not seem worth the purchase.

I should check out the successor game, WIngs of Glory, but my limited knowledge leads me to think this is mainly focused on World War 2, when I prefer the First World War setting of this edition.

This game is seen as the standard gateway worker placement title, and with good reason.  It’s simple, with scope for choice and strategy, but also employing a limited set of options for your workers.  I like the building aspect of it, where your options open up as the game goes on and those who build are rewarded as their buildings are used.

I think the reason that Lord of Waterdeep has fallen a little on this list is that I really want to move on and play a different worker placement game.  Caverna does appear on the list, but the dry theme of that can alienate some groups.  I think I’ll have better luck this year if I can get Euphoria to the table.  I’ve had it for a while, since the original Kickstarter, but have yet to actually break it out.  This year!

I think I might be going off cooperative games, to some degree.  I mean, there’s a new cooperative game in my top 10 this year, but generally speaking, I’m finding these games to be more group dependent than others.  I find they often suffer from the much-lamented ‘alpha-gamer syndrome’ where one person takes control of the group.  I do try to ensure that this person is not me and, sure enough, it very rarely is.

I like this game a lot, though.  The theme is really cool and I like how the sandstorms move around, potentially derailing the party’s carefully calculated plans.  Although these sandstorms can be punishing, they are rarely as devastating as the epidemic cards in Leacock’s more famous game, Pandemic.  This game is a more forgiving animal, and one that is much better for groups of beginners. 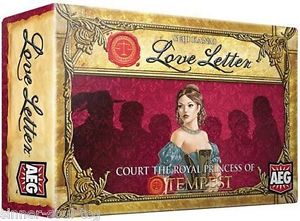 Love Letter is a game that does a lot with a little.  It is a microgame that consists of a few cards and some eurocubes.  Despite such a small and unassuming package, the game packs in a really enjoyable experience with lots of potential for some really good interactions built around bluffing and deduction.

There are also lots of different version of this game, which can provide an experience that may be better suited to your group than the dry, courtly theme of the Tempest Universe version that AEG originall released in the west.

This game has slipped slightly in my list as it has not seen as much play this year and other games that have entered the list have knocked it back a little.  I still rate this highly as a fantastic microgame that can be broken out just about anywhere.

A classic of the worker placement genre, I very much enjoy Caverna.  In this game, I get the depth and variety of choice that I find lacking in Lords of Waterdeep.  I get to build my farm, assign my workers, send them out on little adventures and compare my own efforts to those of the other players.  This is a rich, rich experience with fantastic gameplay but very little theme.

And that there – the lack the theme – is the problem I have with this game.  I can’t get it to the table with many groups as they find the theme dry or dull.  The sheer amount of piece in the box is a further obstacle to the new player, as this does make the game seem quite intimidating.  I just can’t get this to table as much as I’d like, and I don’t think that’s my fault.  That’s why this game has dropped this year.

Bandu (aka Bausack) was not on last year’s list.  I’d played it before, but not a lot.  In the past year, I’ve played it a fair bit with some groups of kids, and it works really well with these groups.  I like auction games, so that aspect of it works well for me.  What I don’t normally like are reflex games or games with other physical mechanisms.  That said, I quite like building my tower, and it’s great when you can make a piece work that you were initially unsure of, or deviously bidding to add an awful piece to another player’s tower!

The instructions give several alternative sets of rules, adding further variety to the game.  I can see myself playing a lot more of this in the coming year.  The physicality of the game and the fact that I’ve only really played with a specific type of group is what has probably stopped Bandu from coming onto the list at a higher position. 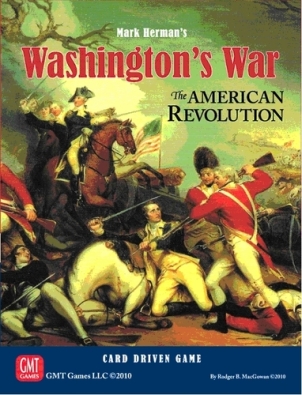 This game is a re-design of an older game, entitled We The People.  This game was the original ‘card driven game’ which went on to inspire titles such as Twilight Struggle and 1960: The Making of the President.  Given my love of these games, I was keen to try out the original, or at least the re-designed version.  I have enjoyed playing Washington’s War, both in terms of the gameplay and the historical setting.  I like how the two sides play quite differently and although I don’t feel that the game is as refined as Twilight Struggle, you can see a lot of the seeds of that game in here.

For gameplay, I’d rather play Twilight Struggle, but theme is a powerful force for me, and there will be times that I will want to play through the revolutionary war, rather than the cold war.  I’m also glad that this game has seen table time, as I am concerned about how few of my growing collection of GMT Games are getting off the shelf and cracked open for play.

A reimplementation of Avalon Hill’s classic Dune board game, Rex reskins the game to fit into Fantasy Flight’s Twilight Imperium universe.  In this setting, it is presented as a prequel to FFG’s sprawling space strategy game.  This game ticks a lot of boxes for me, as it has variable player powers, rules for diplomacy, alliances and shared victories, and plenty of opportunities for the the game to turn around.

The thing is, the biggest problem with this game is the re-theme.  What it has really convinced me of, is that I want a copy of Dune.  Whether that’s a retail copy or a nice print and play, I don’t know, but I think I’d enjoy the original theme more than I do the new one.  The realisation, and the fact that other games have entered the list, has resulted in Rex dropping a few places since last year.

Another co-operative game that has dropped down in my list.  I enjoy Shadows Over Camelot, and I appreciate that it was an early example of a cooperative game with a hidden traitor mechanism, but I think I actually like the game better without a traitor.  I see the point in it, though, and I usually use the traitor, so long as I’m not playing with a completely new group.

The theming of this game is excellent.  I love the board, the pieces, the miniatures.  The artwork is as good as one would expect from Days of Wonder, and I hope that they are allowed to continue with the same attention to detail in the new era of ownership by Asmodee. 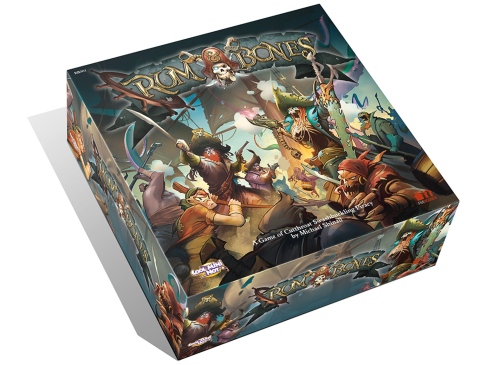 Publisher: Cool Mini or Not

The third new game on my list, Rum and Bones simulates a specific genre of videogame.  The MOBA genre encompasses games like DotA, League of Legends, Heroes of the Storm and Smite – all games which I really enjoy.  With this in mind, I was completely predisposed to enjoy this game.  The game is very good.  I like how it handles the individual characters in contrast with the mindlessly progressing minions.  I like that each character feels unique.

What I’m a little less keen on is that in a few games, it became a bit of a grind.  This may have been down to us perhaps not playing as aggressively as we should have, but nevertheless, it did become less enjoyable.  I also think that the two factions in the box could quickly become stale, but there plenty of extra factions and another big box to bring in more variety.  This is also a game where I feel the basic system could be lifted and reskinned.  A couple of years ago I was looking for a good way to run games like League of Legends, and this is it.  It could easily be applied to a new map and theme.  Something for the back burner, perhaps?

Frustrated by levelling issues today so finally switched out to a glass bed for my #ender3. . First print is running beautifully. . #3dprinting #3dprinted #hobby
In 10 minute intervals here and there, setting up separate #hobby space to try to help differentiate in this time of home working. . #games #miniaturepainting #adeptusmechanicus #warhammer #40k #citadelpaints #vallejopaints #hobbyspace
A wee #3dprinted house for my #fantasy #wargames town board. Printed in 7 parts. . #tabletop #tabletopterrain #warhammer #aos #mordheim #miniatures #frostgrave
Collating some #newbooks from the past few weeks. Feeling my #mutantyearzero, #mutantcrawlclassics and #shadowrun. . #rpgs #roleplaying #tabletop #tabletoprpg #frialigan #modiphius #catalystgamelabs #goodmangames #games #mutantelysium #shadowrunsixthworld
Gone some cleaning up and trimming to do before I start to paint and glue, but that's it done! . #3dprinted #tabletop #tabletopterrain #games #mordheim #frostgrave #miniatures
#wizard and apprentice duos for my soldier and cultist #frostgrave warbands. . #games #tabletop #miniatures #ospreywargames #northstarminiatures #northstarmilitaryfigures
First #miniatures for #frostgrave or #mordheim on my WIP fantasy town board. . #northstarminiatures #northstarmilitaryfigures #games #tabletop #wargames
Oh, look, a big pile of long-neglected and damaged #huskymodels #diecast cars. I wonder what they could possibly be for... . #games #tabletop #miniaturesgames #wargames #gaslands