HeartBeat Dice Volume II: Metal and Sharp Edge Dice available on Kickstarter – I still really grudge the idea of paying a lot for a set of dice.  Oh, I know that there are sets that show real craftsmanship, but I don’t feel that they’re for me.  I just find it hard to justify.  Then sets like these come along:

So first up, the metal dice in this campaign are hideous.  They’re horrid.  The lovely, sharp, shiny ones above?  They look great!  I mean, the sharp edges, the vibrant colours, the shimmer, the depth… all amazing.  I especially love the font.  The big, bold, white numbers stand out and look really striking.

One Page Rules releases rules for Age of Fantasy: Regiments – I’ve written about One Page Rules before.  I appreciate their style, producing an ever-growing range of nice, simple games.  Their latest offering is a mass-battle fantasy wargames reminiscent of classic Warhammer:

The modular approach to the game, where extra complexity can be added or omitted is a cool idea, and makes an already straightforward game all the more accessible to new players.  I really do encourage you to take a look through the whole website as there are plenty of great rulesets therein.

Monster Fight Club releases Cyberpunk RED miniatures – I told myself I’d check out Cyberpunk RED, but I’ve still not gotten around it.  There’s just always been something else that took priority.  I’ll get around to it.  Maybe.  In the meantime, there’s been a wee range of minis released:

This set features the Law Enforcers, with 3 enforcers, another with a riot shield, and a sergeant.  It’s actually a really nice set.  There’s a lot of detail here and they’re a good mix of recognisable modern-warfare-esque elements and some more futuristic concepts for the masks and weapons.  Yeah, really cool! There are a further 3 acts, but this one seemed the right with which to start.  Petersen knows his Cthulhu Mythos.  He was the original creator of the Call of Cthulhu RPG and a number of other games based on the works of H. P. Lovecraft.  He knows this subjects matter.  I am sorely tempted to pick up this book, and maybe even just buy the whole set outright.

Severed Books launches Massive Gelatinous Cube Dice on Kickstarter – Another dice Kickstarter, but one with a definite twist.  These are very big, 2 inch dice.  They are translucent and green, much like the classic monster for which they are named: 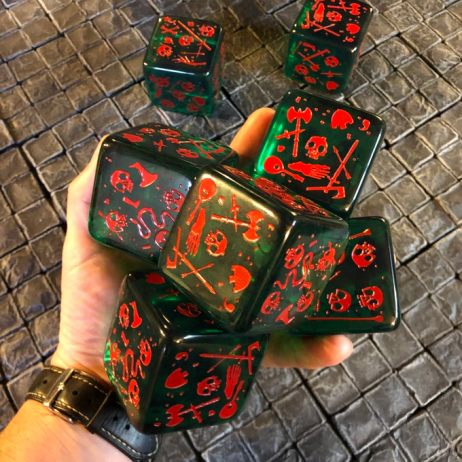 The design is really cool, and they’d be good for things like convenstions where you want everone to see what’s going on.  I don’t have a huge amount to say on these, but they’re cool.  Go check out the campaign page.

Flesh Eaters Kill Team @ Heresy of Us – What I love about Kill Team is that, in the right hands, it encourages such creativity.  Hobbyists can work on a small group of miniatures for a particular force, focusing on making that small group really individual and beautiful.  In this case, they’re also quite brutal.  These Flesh Eaters remind me in theme, colour scheme, and in name, of the Flesh Tearers, one of my favourite Space Marine chapters.  These are fantastic minis, so well put together and painted.  Take a look and see what I mean about hobbyists really focusing on making their Kill Team miniatures individual and beautiful.

Dakkajet @ The Wargaming Bear – The thing I like about Orks is that anything that can move suitably fast can be an Ork vehicle.  Rickety olf truck?  Ork vehicle.  Half-destroyed Space Marines Rhino?  Ork vehicle.  Tyranid Carnifex that stands still long enough to slip a harness over?  That’s an Ork vehicle.  The author of this article has made a pretty cool, pretty Dakkajet out of a Space Marine drop pod.  This is actually an idea I may try to steal for myself.  I have an old drop pod that I am never going to use for Space Marines again… at least a mek could put it to good use.

Gaslands: The Big Game Hunt @ Wyrd Stones & Tackle Zones – Ooh, this is cool.  First and foremost there are loads of great pictures of miniatures and terrain.  Then there’s a great writeup of how the author gathered the miniatures and set up their game.  Seeing this just firther whets my appetite for a game I am very keen to play.  I’ve actually been printing off some bits and pieces to start converting up some old diecast cars.

Oathmark – Sorting Out Figures And Testing The Rules (Playing With Myself) @ Steinberg Shed Space – Osprey make really interesting little miniatures games.  They pump out book after book and they are always really cool and different and generally fun.  Oathmark is a massed battle game that the author of this post has been trying out.  That it is written by the same author as Frostgrave is probably a good sign.  I’m keen to learn more about this game.

Street Fight: A Mordheim Battle Report @ Ork a go go –  Mordheim is the game that made me want a fantasy city board back when it first came out.  Now, a couple decades later, I’m actually working towards this on my 3D printer, with a few pretty sizeable buildings already completed.  More on that in a future article.  The author of this article has a pretty kickass board with a lot of really cool terrain.  This article contains great pics of this terrain and of some really nice warband miniatures, too.  Go have a look.  The actual article is nice writeup as well, but it’s the photos that really sell it.