A Song of Ice and Fire miniatures game hits retail – This was put out a little while ago on Kickstarter but has now made its way into retail channels.  The core set is your starting points for miniature battles using the armies of George R. R. Martin’s books:

There’s a ton of expansions boxes and whatnot also available, or coming soon.  The Kickstarter never really grabbed my attention and what I did see didn’t seem too revolutionary.  A friend picked up the whole set, so I might try to give is copy a spin before considering picking this up, myself.

Prelude expansion for Terraforming Mars hits the shelves – Terraforming Mars is one of my top played and favourite games this year.  I don’t think it’s a game that necessarily needs expansions, but I’m tempted to start picking expansions up, jus for the sake of variety, and to keep things fresh:

The promise of more corporations is a big draw, here.  Each of the corporations changes your personal game quite profoundly, and they all have their little quirks and personality.  More variety in this regard would be very welcome.

Unity Core Rulebook put out by Modiphius – I don’t know much about this, but it’s an RPG from Modiphius and I am a Modiphius fanboy.  They describe it thusly:

Punished, forsaken, and left for dead by the divine hand that created them, four races must come together and unite against the grim horrors of a world set on fire.

Explore the forgotten remnants of a once Golden Age when mortals rose to challenge gods. Rediscover long forgotten ancient technologies that blur the lines between reality and wonder. Stride atop colossal mechanized machines of war from a bygone era. Embrace the discovery of new and exciting cultures in a scarred landscape full of secrets and hidden beauty.

Unity is a fantasy roleplaying experience focused on spectacular storytelling, cinematic moments, deep character growth, and a riveting combat system that encourages you to combine your powers with your allies to overcome impossible challenges.

I’m looking forward to having a flip through this one.  The art that’s been shared is really nice and I expect production to be, as usual, top-notch.

Kraken Dice replenish the Island of Misfit Dice – I’ve linked to Kraken a few times in the past.  They are a dice company that make some really pretty products.  Their Island of Misfit Dice is basically their way of selling off slightly faulty or imperfect stuff, like dented or scratched dice: 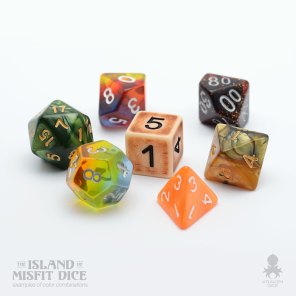 It’s a quirky way to still make a bit of money from damaged product, and they put a cool spin on it.  I like the idea, and it’s a nice way to see some random example of their stuff, even if not quite in perfect condition.

Q Workshop launch Top Drawer Dice Kickstarter – I have a set of Q Workshop dice and have seen another few sets in person.  They’re always pretty cool, with nice designs.  This Kickstarter sees them bringing out previously designed, but as-yet-unused sets: 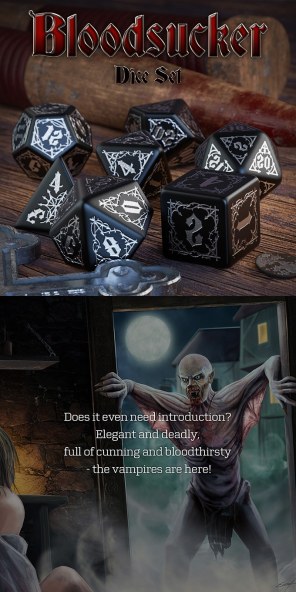 Price is very reasonable, and I’m tempted by the Arcade set, myself.  The Wizard set is nice, but I prefer the alternate colour scheme for that, which is unlocked via stretch goals in the campaign.  Worth a look, I reckon.

Games I Use During the First Week of School @ The Meeple Street – a fellow gamer and a fellow teacher!  I’ve also used a few games in the classroom, but not the ones that the author uses.  It’s interesting to read of the experiences of others in the same field, with the same interests.  I do keep linking to this blog, despite my usual intent to avoid linking to one place too often.  It’s just a pain that this author keeps putting out interesting content.

Role-Playing Game Playing Styles @ Where2Game – a fun, little article in which the author explores all the different types of players that a GM/DM is likely to encounter.  I definitely see a few familiar traits showing up in this list!  Worth a read if you play RPGs with a variety of different groups.

Robots, Dragons, and Daemons – Playing Warhammer Age of Sigmar and Warhammer 40,000 together @ War on the Tabletop – When I saw the title, I assumed this was going to be some daft post in which the author babbles on about using his sci-fi toys with his fantasy ones in some detached, impractical way.  I was totally wrong, and I’m delighted that I was!  This is a really well thought-out piece that gives a lot to think about, as concrete rules that can be used right away.  It draws on previous official content from old editions and includes a good number of cool pictures for illustration.  Really good, interesting article that anyone interested in the concept outlined in the title should go and read.

Renovating a Campaign @ The Rolling Bones RPG Blog – I like this post for several reasons.  I love the Dresden Files, FATE and the Dresden Files RPG.  I love RPGs in general.  I like it when people are reflective about their campaigns.  I like to see how games and groups evolve.  This post covers all of that stuff.  The author runs a group using a light, cut-down version of FATE.  The group seem to have outgrown this and, after reflecting on what they are enjoying about the campaign, make the change to the full version of FATE.  This is great.  It’s really cool to see how different groups work and the adaptations they make to their games over time.  A good article.

Darkoath, Unalligned and the Realm of Chaos – What we would like to see in a new Battletome @ Sprues & Brews – An interesting article that speculates on the nature and content of a new Chaos battletome for Age of Sigmar.  I’d also love to see such a book and I agree with the author on all points.  Well, almost all.  We have one major disagreement.  It is suggested that the current plastic Marauders are starting to show their age.  I challenge this assertion, as they started to show their age a long time ago.  I like speculation articles like this, that focus on the concept of the army and what GW could do to make a nice, thematic force, rather than those that focus on rules and power levels.

On No Rerolls this week, we’ve maintained radio silence.  Not even a hobby update!  There wasn’t much to share, to be honest, so it’ll be rolled into this week’s one.