Welcome to our top 50 games list for 2019, in which I list my personal top 50 games at this point in time.  My choices are not limited to games from this calendar year, but instead, represent my current thoughts on the top 50 games to me.  Next year, some of the games featured may move up and down as my opinions change and I get the chance to play more games or revisit old favourites. 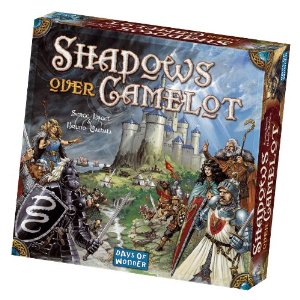 A co-operative game that dropped off the list last year, having previously help positions 31 and 42 in 2016 and 2017, respectively.  I enjoy Shadows Over Camelot, and I appreciate that it was an early example of a cooperative game with a hidden traitor mechanism, but I think I actually like the game better without a traitor.  I see the point in it, though, and I usually use the traitor, so long as I’m not playing with a completely new group.

The theming of this game is excellent.  I love the board, the pieces, the miniatures.  The artwork is as good as one would expect from Days of Wonder, and I hope that they are allowed to continue with the same attention to detail in the new era of ownership by Asmodee.  I’ve not kept a close enough eye on Days of Wonder in recent years to really know if Asmodee is having much of an influence. 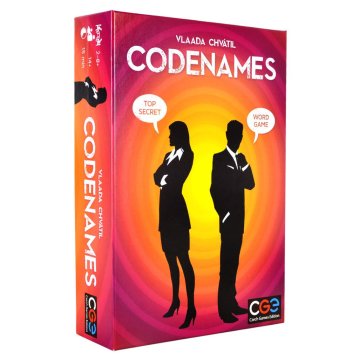 The best thing about Codenames is the frustration it can cause.  That might sound counter-productive, but it’s true.  When I disagree with my mother-in-law one of us will, in jest, bring up an infamous moment from a game of Codenames where we were unable to see the same clues in the same way and got frustrated with one another.  I like that the game can foster these sorts of events and callbacks.

This game has fallen far down the list this year.  That’s not an indictment of the game itself, as it’s still fantastic, but rather of my own fatigue with it.  It’s not as prominent on my table as once it was, and that’s largely due to burnout on my part. 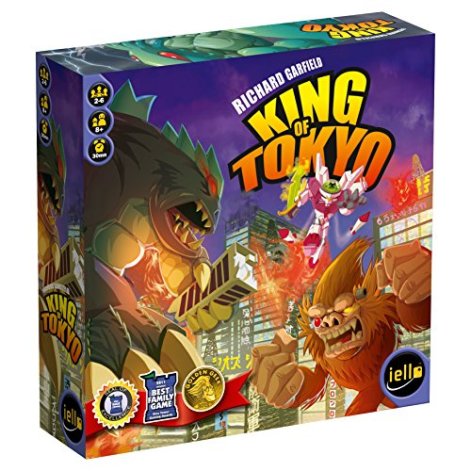 I continue to enjoy playing King of Tokyo (aka Monster Yahtzee).  For added depth, there’s the Power Up expansion, which is almost compulsory for me.  The game has fallen significantly this year as I’m just a little tired of it.  It remains a good game which makes it to the table from time to time, but I tend to play it with younger groups now, rather than with my adult groups. 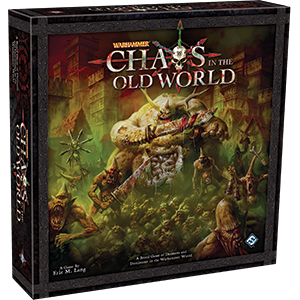 I can’t believe it’s taken me until this year to try out this classic.  It’s even an Eric Lang game, which I can usually take as an indicator of quality.  It’s also by FFG, which is another of those indicators.  A friend brought it to group one night and I had a lot of fun as I played it for the first time.  I like how actions work, how scoring operates and I enjoy the area control elements.

I’m a bit miffed that I didn’t buy this when it was readily available.  I’d like to pick this up, but now that it’s out of print the prices people are looking for are somewhat ludicrous.  I’ll keep my eye out for a cheap copy, but I won’t be holding my breath. 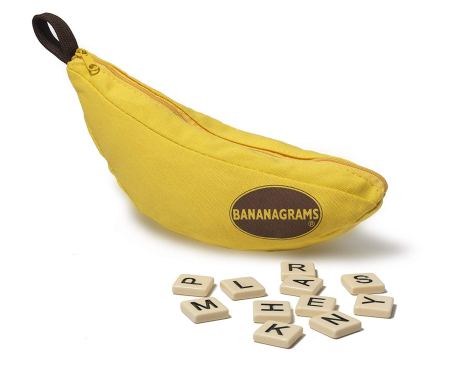 I’ve had Bananagrams for a few years now.  It’s actually a game I regularly use with kids, as it’s probably my second favourite word games, after Paperback.  It’s a lot more accessible than Paperback, though.  The best description I’ve heard of it is as being a bit like Scrabble, but without the board.  You take the letters and spell out words whilst ensuring they are all connected up, looking like a crossword.

Bananagrams is a solid choice for just breaking out when there are a few minutes to spare and you fancy a little challenge.  It can be a bit frustrating for people who can’t really spell, so it’s not for everyone.  Personally, I love it.  I’ve been playing for years, but I think I’ve been appreciating it more this year, hence the inclusion on this list. 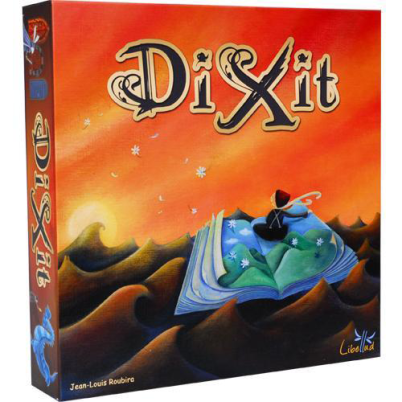 Returning to the list this year, Dixit was one of the first modern board games I picked up when I really started getting into them and it set a tone for me, that these games really are scaffolds for social experiences.  Dixit is all about empathy and language, so it really appeals to me and I’ve stuck with it, even years later.

I took this off the shelf and onto the table a few times in recent months, following a long time where it was not getting much attention.  It’s a game where the dynamic can be quite different depending on the group, though it suffers somewhat when people overthink it. 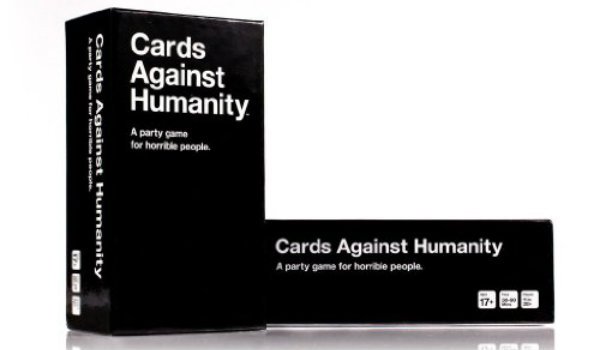 This feels iffy.  I’ve resisted putting Cards Against Humanity onto this list for years.  Simply put, it’s not a particularly good game.  It gives people who are not funny a chance to pat themselves on the back for being funny.  They don’t deserve this praise.

That said, it’s a game that I rarely go more than 2 months without playing.  It has a habit of going on too long, but as with Dixit and other games, treated a social scaffold, it can be enjoyable – particularly when taken with alcohol.  If this doesn’t read like a ringing endorsement, it’s because it is not one. 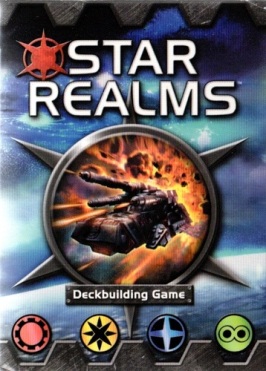 Star Realms is my most played game ever.  That is, it’s my most played game if you let me count digital playthroughs.  I play a few rounds of the Star Realms app each day.  Therein lies the reason that it has fallen 30 places this year.  The app has kind of killed this game for me.  I’ve played it so much that I find myself playing on autopilot and not really enjoying the experience as much as I should.

The thing is, it’s still a great game with a lot going for it!  First up, it’s a deck builder.  Immediately, I’m going to like this game.  Then, the art is cool.  This is even truer for Hero Realms, the fantasy version of the game, which is bloody beautiful.  Finally, it’s really competitive.  You and your opponent are pitted against each other and properly go for it, throwing ship after ship at the other player and space station they put in your way.

I might just, you know, give it a break for a bit. 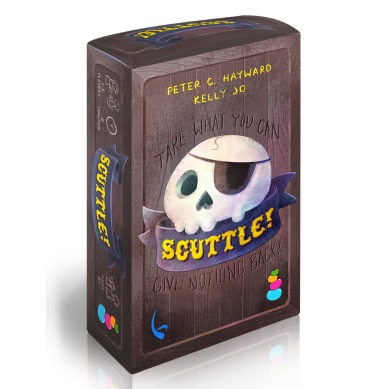 Scuttle is new to the list.  It’s a very simple card game where players are putting down numbered cards to try to be the first to get to or exceed 21 points, or ‘doubloons’.  Cards can generally be played for their numeric value or for their actions.  These actions can give you more options or allow you to inconvenience other players.

The game was given to me by a friend who backed it on Kickstarter.  It’s a great filler game that you can play when you’re waiting for your group to all arrive or if you’ve just got a little time to kill.  It doesn’t have a lot of depth, but I’ve enjoyed my time with it this year. 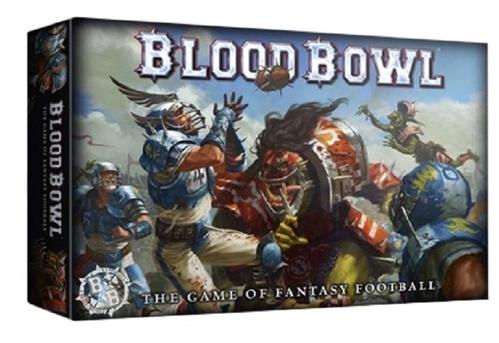 Blood Bowl!  Great game!  One of my earliest board games, this still holds a special place in my heart.  It also holds quite a large place in my collection, as there are just so many boxes of it!  I’ve got the first, second and third edition boxes, plus the most recent re-release from Games Workshop.  I’ve got a couple of the new GW teams and, currently, three painted third-party teams.  These are a Shadowforge Pro Elf team, a Black Scorpion Skaven team and a Warlord Games Dwarf team.

As with most miniatures games, this has not made it to the table too often in the past few years.  It’s still great, but I feel that it takes a little long for what it is.  Some people criticise it for the amount of randomness involved, but I think this is ok.  It’s not usually what I like in games but, with Blood Bowl, you know that this chaos is part of it.  You know what you’re getting into.  Also, minimising this randomness is why I quite like playing Dwarfs.  That said, I’d like to get some more teams painted up…