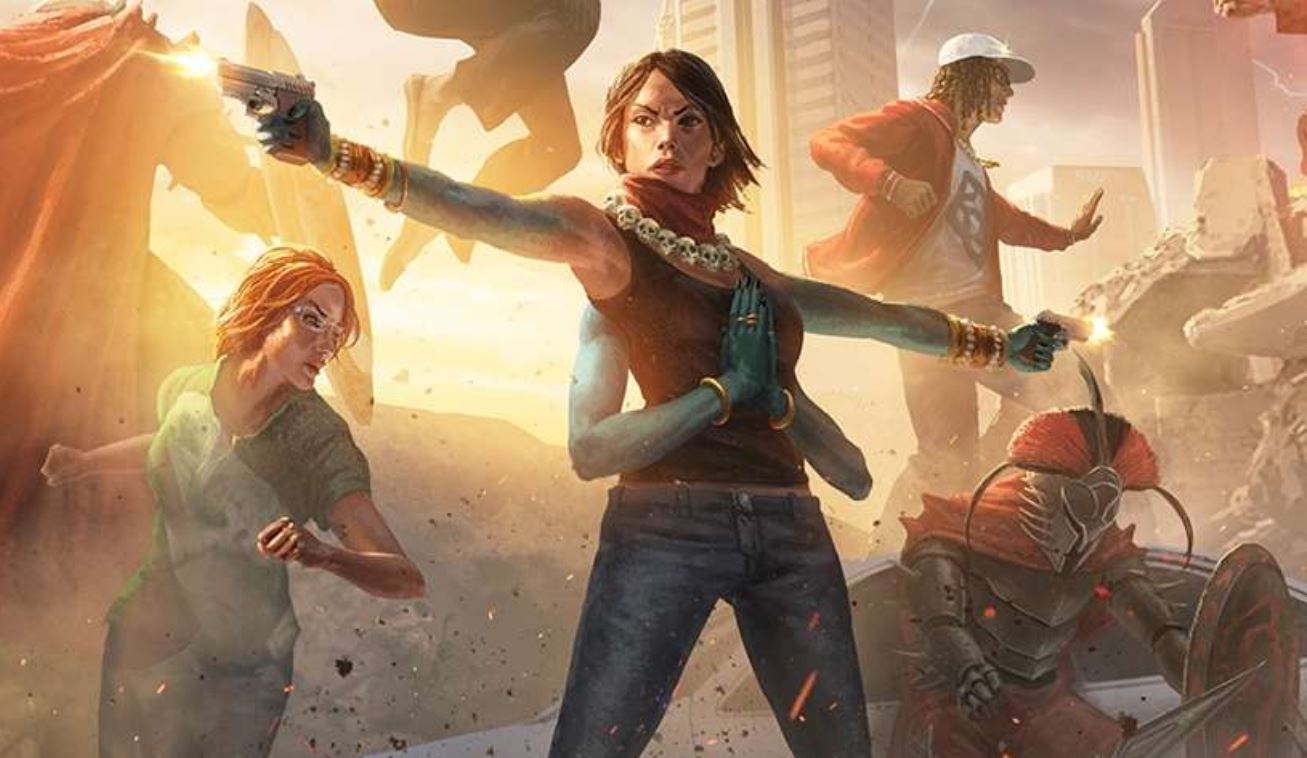 Urban Fantasy is probably my favourite kind of fantasy. Oh, sure, I love delving into a dungeons and slaying a dragons, but given the choice, I’d rather fight my monsters on the streets of a city, or gather with friends in the local dive bar as we plan to storm the highrise HQ of the local crimelord. It’s why I love the Dresden Files books and RPG as well, I suppose.

Now, with DTRPG running a sale with a focus on these items, I’m like the proverbial kid in the candy store. Sorry, child in a sweet shop. Let’s leave the ghastly Americanisms out of it, eh? I thought I’d take a look through what’s on offer and share some of my highlights.

You can view the sale as a whole by clicking here, but I’m really looking to delve in and find some of the really cool urban fantasy games that are included in it. Now, let’s see what’s interesting…

In terms of theme and setting, Changeling: the Dreaming is one of my favourite World of Darkness games. My favourite thing about it is this clash between the Glamour of the Fae and the Banality of day to day life. I started writing about this, but I actually a forum post on the Onyx Path forums that sums it up nicely:

Also one thing I like about CtD is how it’s probably the most meta out of all the WoD gamelines.

In that playing the game is sort of like replicating the experience of playing a tabletop RPG. The whole concept of going on “quests” into the Dreaming, the medieval fantasy trappings of the Kithain setting, and how the many fantasy TRPG character tropes not being hard to map on the kithain (trolls as fighters/paladins, sidhe as clerics/paladins, redcaps as barbarians, sluagh as arcane spellcasters, pooka as druids, etc). But when bumped up against the Autumn World, just like with actual TRPG gaming, can interrupt or bring to a screeching halt. That epic siege on the chimerical dragon takes a bit of a downturn if the troll fighter gets a call that her grandma just had an episode and was rushed off to the emergency room. Or the piskey rogue couldn’t make it because he got called in to do overtime at work.

The 20th Anniversary edition is a large, 487-page tome with a ton of content. It’s also usable alongside this fan-made C5 conversion guide, for playing Changeling within the 5th edition World of Darkness rules.

Although sharing some themes with Changeling: the Dreaming, it must be said that Changeling: the Lost is a very different game. Whereas players in CtD are humans bonded with the spirits of the Fey, making them Changelings, the player characters in CtL are victims of the Fey. They were abducted and replaced with a fetch and, due to their experiences in captivity they are not only no longer the people they were, but they’re not even entirely human any more. They can’t go home. It’s darker, definitely.

Whereas CtD is abotu the dangers of growing up, about facing the real world, CtL is about the dangers of moving on after a trauma in a world that’s moved on without you, without caring or even noticing that we were gone.

Based on the Chronicles of Darkness Storytelling System, this is a fantastic game, and it was one of my favourite RPGs for a good while when I played it around a decade ago.

Another World of Darkness title, and another 20th Anniversary Edition. These 20th Anniversary books are brilliant, by the way. They just have so much content, and they are real celebrations of the games. At 696 pages, this one is an absolute beast of a tome, which seems appropriate for mages, I suppose.

A game of cosmic truth and struggle against paradox. The system sees the players take on the roles of Mages and what that actually means can be very different from game to game. It’s a versatile system than make stories of varying themes. It can be a superhero story about protecting the innocent, whilst you are also condemned by them, not unlike the X-Men. It can be a story of survival, which is more the focus of the Revised edition, wherein magic is waning, but you still stand and you still fight because someone has to. It can be a game of politics. Much like the Mages themselves who work their magics to reshape reality, you can make this game whatever you need it to be.

Chronicles of Darkness: The Contagion Chronicle

I’m someone who was never really keen on running different World of Darkness games together as it really never felt like they were balanced against one another and that a decent Mage could just destroy anything else. Chronicles of Darkness isn’t as bad for this, but having a campaign that actively encourages you to mix your werewolves, vampires, mages and the like is actually pretty damn cool.

A few years ago I played in a very fun campaign of the first edition of Scion. The game is pretty cool. it sees players take on the roles of Scions, descendants of the Gods of various pantheons. I had a lot of fun with my blues singer, a Scion of Baron Samedi.

At the core, this is very similar to White Wolf’s World of Darkness games and that’s great. It’s a really good system. It does have a different feel, though. It dials down the horrors aspects and encourages more of a traditional heroic adventure. You know, the kind of heroism that you can’t really credibly engage in as a terrifying, blood-sucking creature of the night!

I picked up the second edition late last year and have been enjoying reading through the books. All the cool background and lore came flooding back, and has generated loads of fun ideas.

I never got much into the Dishonored games. I quite liked the story, and I loved the visual style of the world. The worldbuilding, generally, seemed really interesting and engaging. The style of gameplay just was not quite for me. I’d have preferred more of an RPG, I think.

Now, this is a book from Modiphius, so can we just get my fanboying out of the way? Okay. This book will be a beautifully produced artifact that is worth the price of admission just for how pretty it is.

Gameplaywise, it uses Modiphius’ in-house 2D20 system, which is pretty solid. It certainly seems popular, and flexible. If the book does enough legwork in setting out the world, this could be a great game for fans of the franchise and new players alike.

THings from the Flood

As a fan of Tales from the Loop, I was very interested when the sequel, Things from the Flood was released a few years later. First of all, as with all Free League productions, the book is beautiful, and the artwork is fantastic. That needs to be said as I’m a sucker for well-produced RPG book.

The game itself is a little darker than its predecessor, a darkness which is exacerbated by the higher stakes in this game. In Tales from the Loop, characters cannot actually die. In this, they can. The immediately adds that extra element of mortal danger.

The weirdness of the setting, along with that extra layer of menace makes this really appealing.

A game that is very focused on storytelling first and foremost, Chuubo’s Marvelous Wish-Granting Engine is a bit of an oddity. First, it’s diceless, which is unusual. Second, despite being diceless, which I would normally associate with a game being quite rules-light, this is actually a surprisingly heavy, meaty game.

Being more complex than you would expect, and being quite different, new player do need a bit training, or the game needs to be run by a game master who is either experienced or just has a very good grasp of the rules. There are a lot of options for player creation, there are lots of active quests at any time, location-based rules, individual stories and goal for each player than make it difficult for a group to actively work together… there’s a lot going on… I feel that running the game would be very challenging. The game system is extensive (the PDF is some 576 pages long) yet there’s no real antagonists or enemies in the book, and you’re kind of just left to work this out.

I don’t know if I’d run Chuubo’s. No, actually, I’m pretty sure I won’t. That said, I’m actually quite glad that I have the PDF. The whole book is actually about how to tell stories. This could be useful, I suppose, but either way it is definitely interesting.

I love the Dresden Files Roleplaying Game and ran a couple of campaigns over the past few years. At the start of the first lockdown in 2020m, I went ahead and launched another short campaign, this time using the streamlined Dresden Files Accelerated rules.

The game has the same generaly feel as the bigger game, but with simpler rules. That does not mean that the game is ultimately any more or less satisfying, as we still got a damn good story going, and managed to build in a nice bit of intrigue between players. I was pleasantly surprised at how well it worked online. I actually had slightly more players than I’d normally want in a Dresden Files campaign, and the simplified rules made the bookkeeping for this cohort much more straightforward.

The book itself is quite fun, continuing the tradition of the Dresden Files RPG book being in-universe artifacts. In this case, the book is presented as being written by Ivy, aka The Archive, who happens to be one of my favourite minor characters from the books. As with previous Dresden RPG books, it also sees a number of annotations and post-its throughout from character giving their own commentary on the book. I always liked this little touch.

Yeah, a good game and a relatively small book that is packed with a ton of content. Would solidly recommend!

I had not heard of this particular title until I was browsing this sale, but it’s one that caught my attention. Not so much for the cover art, as that’s pretty ugly, but the art previews on the store page are beautiful:

I actually really like these 5E conversions. I’ve previously written about a fan-made World of Warcraft setting for 5E and I’ve been reading through the fantastic Monsters of Murka setting. Oh, and the Stargate one! Maybe I should do some more reviews…

The book presents a cool, sci-fi, biopunk world with all the necessary adaptations to make the 5th edition rules for Dungeons & Dragons work for that setting. The 8 new classes shown above are the tip of the iceberg and there is a lot of content in this book.

I don’t know a lot beyond what’s on the DTRPG page, but it had piqued my interest and I’m intending to pick it up and have a leaf through it. It looks like a pretty good conversion, the art is lovely, and it’s a theme that I adore.