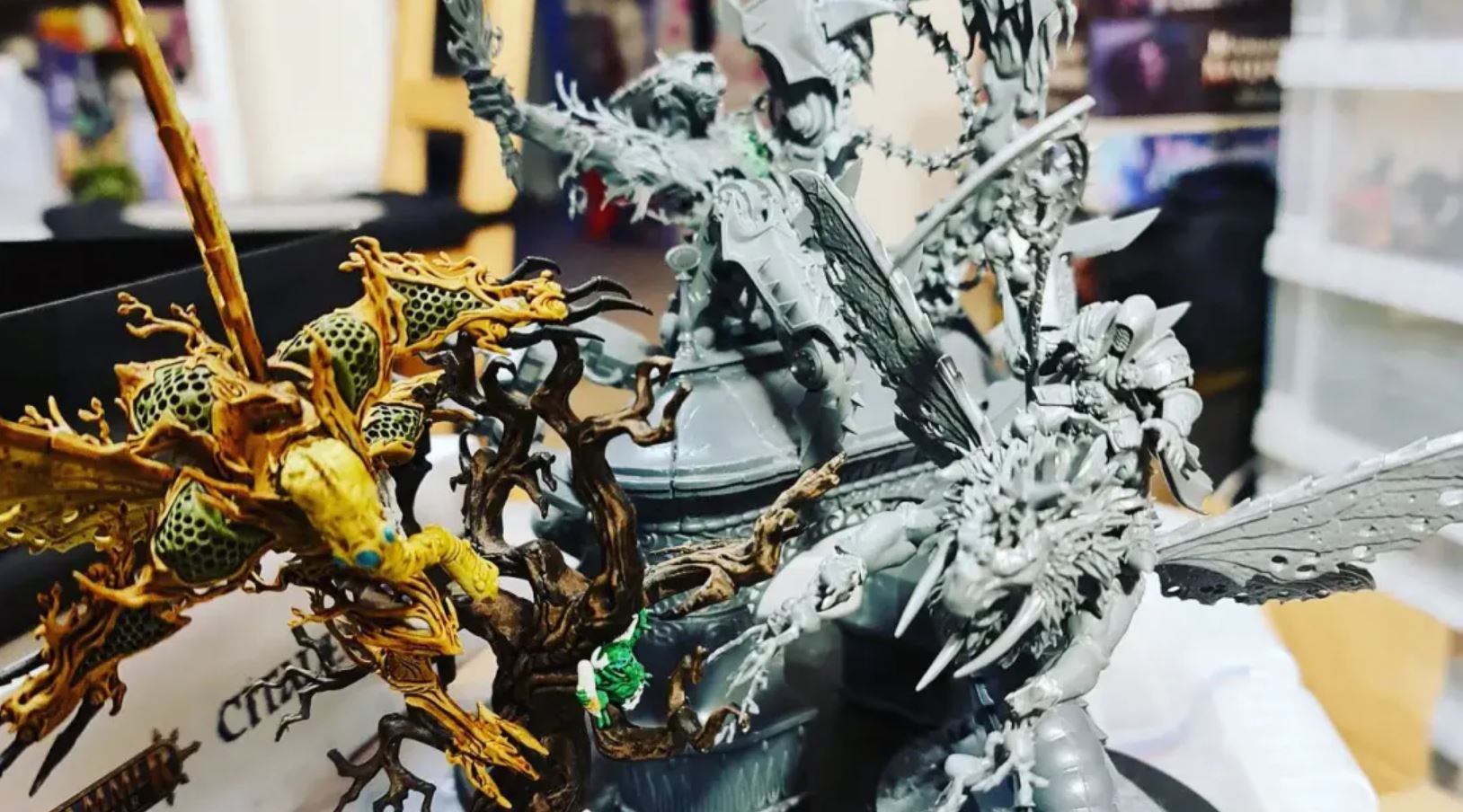 I’m really enjoying putting together my Nurgle armies. First of all, I love that I managed to paint my first 2,000 points of Maggotkin of Nurgle in just a few weeks. Secondly, I love that I got to really dive in with the kitbashing. Every miniature in that army, with the exception of Horticulous Slimux, was made up of more than one citadel kit. Mostly, they were from the Plaguebearer and Dryad kits, but I also used bits from Kurnoth Hunters, Tree Revenants, Plague Drones, Poxbringer and possibly others. Oh, there’s a couple of bits from the Squig Herd sprue, too!

There’s some rough and ready Greenstuff work in there, as well. What can I say, bad sculpting in a Nurgle army can be explained away by Nurgle’s Rot. What a great excuse! I’m certainly sticking with it.

I do intend to add more to the Maggotkin, but I’m holding out to see the new book and weigh up what I need to add. I’m thinking that I need to add a decent contingent of mortals, along with a scrivener, a Great Unclean One, and maybe Epidemius. I think I’ll be doing fewer conversion with the mortals. I also don’t really have any ideas for the Great Unclean one, so he will likely also be unchanged.

Where conversions are happening is in the Nurgle-themed Slaves to Darkness that I’m slowly working on.

They’re not really a priority at the moment and I’ve made little to no progress on painting, but I’ve enjoyed a number of conversions:

The Soul Grinder is definitely the centrepiece of the army. I don’t like the model, so I welcomed the opportunity to make changes to the general silhouette. I obviously had the Treeman bits which I always intended to use on it, but I had that leftover arch from the Lumineth shrine that I used to make a floating Gnarlmaw. It was a perfect way to add a little height, make things a bit more dynamic, and break up the vast expanse of that huge, flat base. I need to add some other stuff to really finish the base, but that’s the core of it done.

As you can likely tell from the pictures, nothing is quite finished being built. With the exception of the Warshrine, the actual cutting, gluing and whatnot is done, but some greenstuff work is needed to fill in gaps and smooth transitions. The best examples of this are where lower bodies meet upper bodies, as in both the manticore and the Soulgrinder.

There’s a lot of work here and, whilst it’s far from perfect, I’m delighted that my Nurgle army is really going to be quite unique. I’m also looking for some opportunities to take the same approach, albeit to a slightly lesser extent, in other armies. My Tzeentch army, for example, will see a kitbashed Blue Scribes. This is mostly because my resin Blue Scribes fell from a high shelf and shattered. Yeah. Damn. I’m just glad I had not painted it. I will also be doing a batch of suitable-Tzeentchy Chaos Spawn. I don’t quite know what to do with these. I’m thinking of grabbing models from other armies and just having them erupt with tentacles. Would that work? I’m not sure. I’ll do a practice run with a spare Kruleboyz boss from Dominion at some point. I just really don’t like the regular spawn miniatures.

I used to do some conversions with Chaos Space Marines army, back in third edition, but I’ve not done all that much since. I did some non-Skaven Skavenslaves in 8th edition Warhammer as well, I suppose, by adding some chains to Gnoblars and Flagellants. Beyond that though, I’ve not done much in a while. I’ve also not used any in my Necrons or Gloomspite. That’s on of the reasons I so enjoyed doing my Maggotkin this year. I hope that 2022 brings me more opportunities for creativity!