Critical Role Miniatures on Kickstarter – I’ve never really gotten into Critical Role.  I’ve also never really sat down and watched an episode, so that doesn’t help matters.  I’ve seen clips here and there and it seems fun.  I must get round to giving it a chance.  Fans of the show will be eager to take a look at this project on Kickstarter: 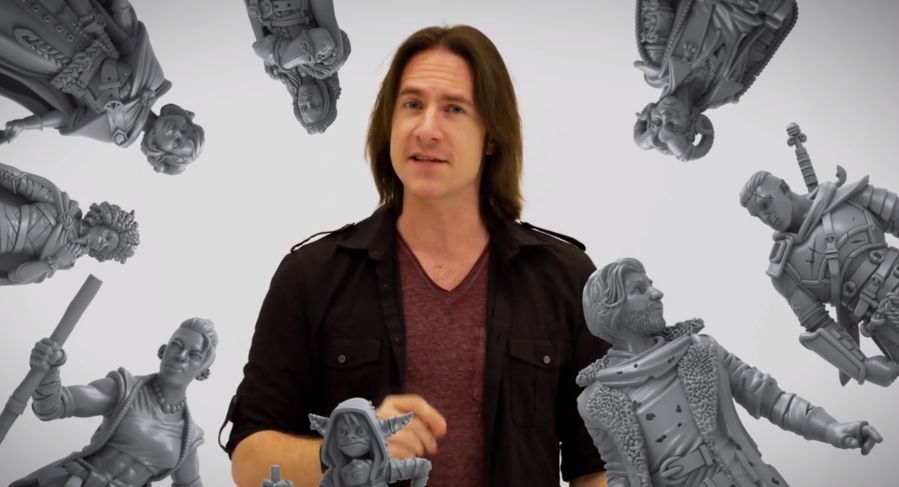 Miniatures of the characters played by the Critical Role crew.  Cool idea, that is made all the better by the fact that it’s Steamforged Games who are putting them out.  Their Guild Ball miniatures are fantastic, so these should be good high-quality minis.

Fowers Games puts of Unabridged expansion to Paperback – Paperback is a fantastic deckbuilding word game and what I really want is more Paperback.  Fowers Games is looking to oblige, having put out this nice little expansion:

The game looks interesting and it seems to have a good, clear design.  I also love the idea of the theme, which is based around space westerns!  So cool!

3D Printable Terrain on DriveThru RPG – I don’t know if 3D model files have been on DriveThru RPG for a while, or if I’ve just missed them.  Either way, they are there now, and many of them look pretty good.  This is a good example of the kind of thing that’s available:

These little buildings are stylistically perfect for games like Infinity.  There’s a lot more on offer on the same site, so if you’ve got a 3D printer it may be worth having a poke around.

SHATTER6 Open Roleplaying released on DriveThru RPG – a pay-what-you-want, open RPG, SHATTER6 seems to be a very open system in several senses.  The lack of a traditional class system means that character creation is very open.  This might make it hard to get started without a template, but means that you can have a lot more control over exactly how your character plays:

I worry that with no such structure and, seemingly, no theming, this might come across as a little bland.  The tag system does seem interesting, though, and they are coming at it with a good attitude that matches up well with how I like to play.  I need to take a flip through the book and really see how it works.

Pandemic Legacy: A Relationship @ Ashpern Papers – This is a really nice article – quite heartwarming, too!  Having just started my own playthrough of Pandemic Legacy with a little group, it was the game that drew me in, but the author ends up talking at length about both the game and their relationship.  I liked how this was put together and it’s really worth a read.

The Third Varanguard – Tzeentch @ foriegnartisan – Another custom Varanguard from Foregnartisan and this time it represents my own patron god!  Like the last one, this looks fantastic and drips with character.  The conversion is a really simple one, but it works so well!  Great pics of a great model.

Why I Love Moonclan Grots by Eze @ Lion City Geeks – Grots are great, aren’t they?  I have a lot of unpainted Moonclan grot.  Like, a lot.  A LOT.  Lots.  Loads of ’em.  Aye.  This article is fun for a couple of reasons.  First, it has a ton of pictures of lovely, nicely-painted Grots.  They look really good and it’s cool to see the conversions that the author has done to add more character to his force.  The second reason is that it’s just nice to read of someone pontificating on the army they love.  Go take a peek!

Random Musings: A foray into online text-based RPGs @ Gaming in the Clouds – Huh, this one’s a bit of a throwback.  I kind of forgot these existed, but I used to spend a decent chunk of time on a couple of online, text-based RPGS – most notably the Discworld MUD.  This article was really a blast from the past and I really enjoyed reading it.  The images are total nostalgia-bait, too.

Wolfburn Distillery @ Annie the Whisky Girl – A bit of local flavour to finish out the week!  A whisky enthusiast discussing my local distillery.  I totally agree with them on it being hard to tell it’s a distillery from the outside, and actually it’s even quite unusual on the inside.  Being an entirely new building and distillery, it’s focused around making the most of the available space.  Everything is very tight and contained.  It’s cool, though.  I like that you can see the whole process in that small space.  A good read about a great wee distillery.

On No Rerolls this week, we’ve posted our weekly Hobby Update.