There’s a Humble Bundle up at the moment for Dark Heresy, a roleplaying game based on Warhammer 40,000 and the first of a series of such games that were developed under license by Fantasy Flight Games.  This bundle has a huge amount of material across two editions of the game and represents fantastic value.

One wee thing worth mentioning is that it feels a little cheeky to see Cubicle 7’s logo plastered all over the PDFs in this bundle, given they were developed by Fantasy Flight Games.  I suppose that’s the nature of licensing deals and Cubicle 7 as a company is fine.  Just doesn’t sit quite right.

That aside, the first tier of this deal will set you back a mere $1 and includes the following:

The core book is in this tier and that alone is worth the price of admission.  It’s a gorgeous book with lots of great artwork.  The rules themselves are kinda crucial for playing the game.  Obvious, I know, but just sayin’ for the record.  The rest of this tier consists of adventures.  We like adventures.  They let us be adventurous!  Edge of Darkness is the one that is most squarely aimed at new players and at giving a good introductory experience.

The second tier costs $8 and, in addition to everything from the previous tier, nets you a further six titles:

Oh, hey, lots more adventures and supplementary material!  There are a couple of highlights for me.  Blood of Martyrs is interesting to me for its focus on the Ecclesiarchy and the Sisters of Battle, one of my favourite forces from Warhammer 40,000.  The other side of this coin would be Disciples of the Dark Gods.  Whereas Blood of Martyrs focuses on the holy church of the God Emperor, Disciples of the Dark Gods looks at the various cults that eat away at the underbelly of the Imperium of Man.  Inquisitor’s Handbook also seems pretty attractive, offering up lots more options for character creation – one of the best bits of many RPGs.

For $15 you can get yourself the contents of the previous tiers and another eight PDFs: 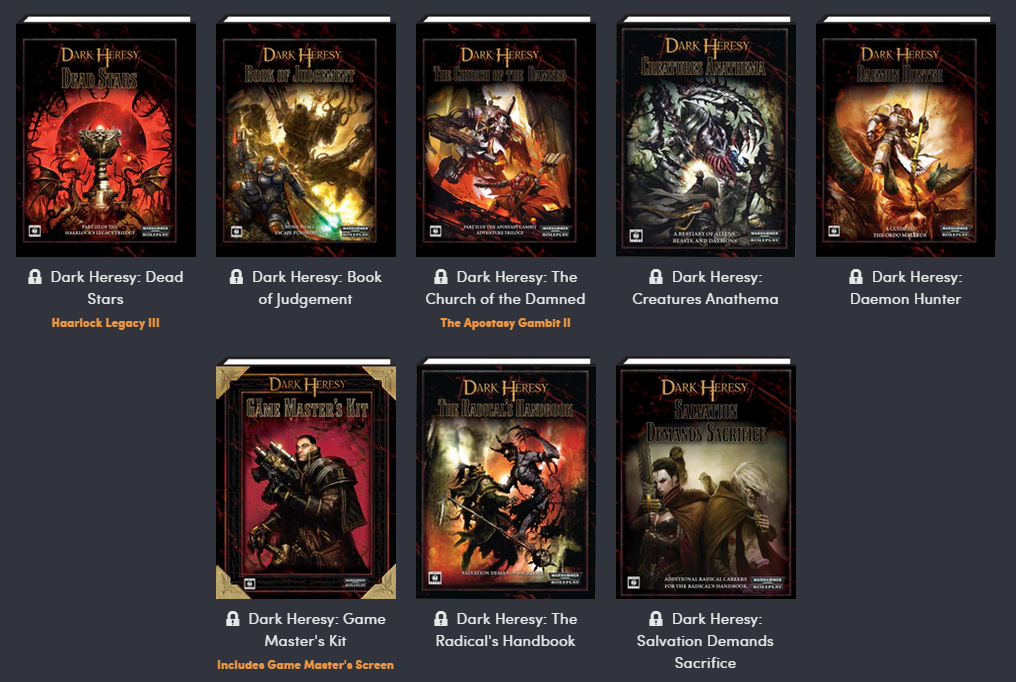 This tier has a couple of titles aimed squarely at the GM.  The GM’s Kit is the blatant one, but there’s also the Creatures Anathema, a bestiary for the system.  I love a good bestiary book.  The art in the Vermin & Predators chapter features some particularly gribbly beasts.  This tier has a lot of material on radical inquisitors and law enforcement.  I also like the inclusion of the Grey Knights in the Daemon Hunter book.  There’s a lot to digest in this tier.

The final tier is a bit different.  It costs $18.  This is $3 more than the previous tier, but those few shekels get you a lot: 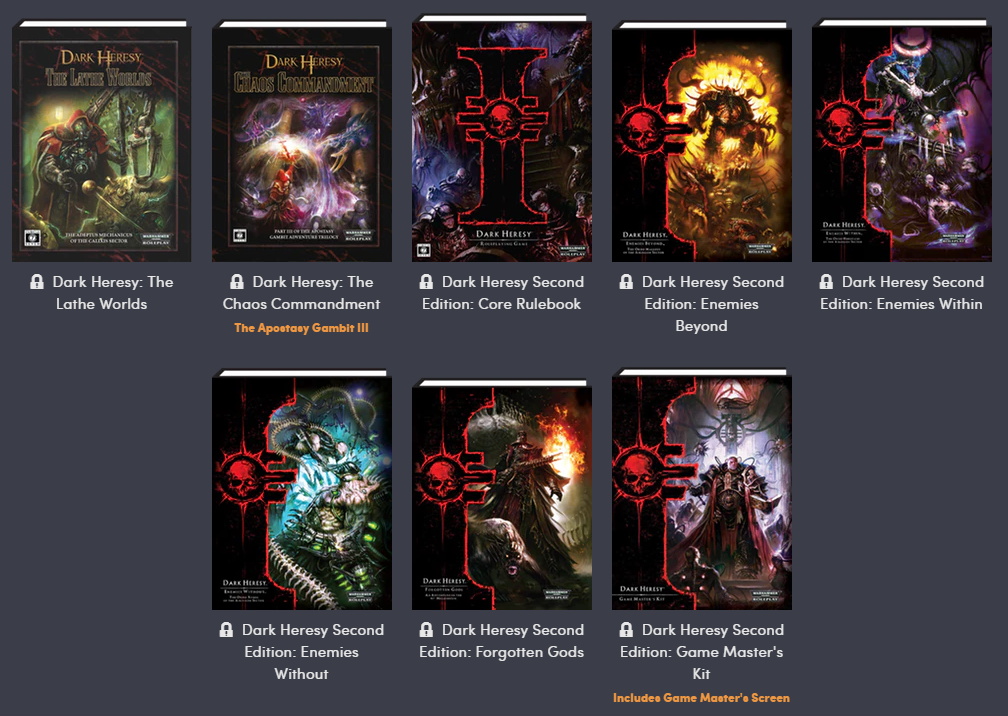 Ok, there are two more sourcebooks for Dark Heresy in here, or at least first edition Dark Heresy.  Most of this tier consists of the second edition of the game.  The core rulebook is, of course, the star of the show, but there is also a further five books included.  There’s some overlap in content, but the they are still well-produced, fantastic sourcebooks.  If you’re interested in the second edition, it’s a good deal.

The bundle as a whole is really good.  The first tier represents amazing value and the rest is still excellent.  There is so much content here at such a good price.  Even if you just love the Warhammer 40,000 setting, these are great sources of information and lore that go far beyond what you’d find in army books.

If you do pick up the deal, a portion of your money will go to a good cause.  In this case, the beneficiary is Doctors Without Borders.  See?  You’re not a nerd.  You’re a philanthropist!

If you’re interested in checking out the bundle, and perhaps even picking it up, you can click here to visit the bundle page.  It really does represent great value and sets you up for epic adventures in the 41st millennium.