GMT releases Zero Turn expansion for Twilight Struggle – As one of my favourite games, Twilight Struggles finds its way to my table quite regularly.  It’s just such a tight, tidy game that plays really well.  Now, GMT Games has decided we need more of it.  Bravo, I say!

Previously released as Kickstarter rewards, the expansions in this box promise to move the opening of the game and add a few historical what-ifs into the mix.  A decent purchase for anyone who regularly plays the game and might be looking to add some new variety to the experience.

Kids on Bikes Deluxe Edition making its way to retail – I’ve had a flip through the Kids on Bikes book and I’ve seen a fair bit of coverage of the game.  It seems really good, but I’ve not played it, not read it in any real depth.

It’s got the feeling of an 80s movie about it, and I really like the collaborative approach to establishing the world around the characters.  Character creation seems really interesting too, with it being based on tropes which can then be tweaked.  It seems to be a fun, rules-light RPG.

TTCombat releases new ‘Sector 4’ industrial MDF terrain – You know by now that I love TTCombat.  Their stuff just represents fantastic value for money.  Their latest offerings continue to be a great deal, but they also continue to make better and better terrain: 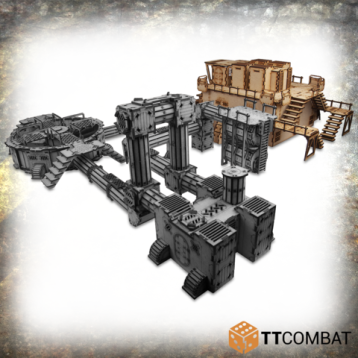 There’s actually quite a bit of ‘Sector 4’ terrain, with a pipe system to connect it all up.  It would make for a great start to any Kill Team or Necromunda board, providing a large amount of cheap terrain and adding in some verticality.

Modiphius releases Strange New Worlds supplement for Star Trek Adventures – I think that in previous years I was something of a snob when it came to RPG adventures.  I was very much of the opinion that they should be homebrew efforts where the GM should weave his or her own story for the players.  Now, I see the value in published adventure modules, giving a good structure, setting up interesting stories and still allowing the GM to make amendments on the fly.  Of course, with companies like Modiphius putting out adventure books, it’s all the easier to see the appeal:

This supplement provides nine ready-to-play missions.  You can cure a mysterious plague, answer Vulcan distress calls, and investigate a research facility that’s gone silent.  There’s way more in here, of course, and the production quality appears to be up to Modiphius’ usual exceptional standard.

Games Workshop releases Necromunda: Dark Uprising boxed set – Games Workshop boxed sets are amazing, but they seem to be putting out more and more of them!  This is one of their priciest offerings, with a heft £175 price tag attached, but it’s also a very interesting and appealing set:

There’s a lot of plastic in here.  First of all, there are loads of cool miniatures, giving you both a Palanite Enforcers gang and a Corpse Grinder cult.  There’s also lots of really nice terrain, which is where the bulk of your pennies are going in this set.  It’s such a nice bundle that I expect we’ll see it selling out petty quick, despite the high cost.  Also, it’s Necromunda!  People love Necromunda.

Blood Bowl Painting Chaos @ Splayed Paint Brush – What a lovely, vibrant purple!  The Willy Miniatures Chaos team is really nice, and the author of this article is really doing it justice.  The NMM is also really nice.  It’s not a technique I’ve tried.  I’m not a confident painter.  I like seeing it done well, though.  Thanks for sharing!

Unique Tabletop RPG Mechanics: The Mystery Story in Tales from the Loop @ House of Nerdery – In the second of what I hope will be a long series of posts, the author is looking at specific mechanisms from different games that really stand out as unique.  From Tales from the Loop, the author looks at the mystery story.  It’s presented as a good tool for defining stories and providing structure.  The author breaks down the different phases of the game and examines the impact of the mystery story on the game structure.

Citadel Contrast Paints with 3D Printed Miniatures (It Works) @ Tangible Day – A long, detailed post of experiments with GW’s range of Contrast Paints.  Coupled with the 3D printing angle, this is a solid hobby article from a couple of very different angles.  There’s some sound advice in here.

200 Word RPG Challenge: I Wrote a Game! @ Gretchen Turonek – Concision is not my strength.  It’s an important skill in writing and one that’s definitely encouraged by events like the 200 Word RPG Challenge.  I hadn’t heard of this, but I’ll be taking a close look at the various games that have come out of the challenge.  The author also shares their own 200-word offering.

The Barracks Emperors from GMT Games @ Dude! Take Your Turn!  – I’m always interested in the latest P500 preorders from GMT Games, even though I’ve not bought into one in quite a while.  The author makes this latest game sound quite interesting.  I like the sound of the combination of trick-taking and strategy.