Stargate was a fantastic franchise.  The original movie was great, but what I really loved was everything that came after it.  Specifically, the series really took on a new life when it hit TV screens in 1997.  That a single sci-fi movie spawned such a huge TV franchise is really something special.  So, then, let’s take a look at the franchise in its various forms before moving on to the latest tabletop offering from Wyvern Games.

With Kurt Russell and James Spader both starring, I was always going to like Stargate.  It came along at a good time for me as well.  My cousin and I, both 8 at the time of release, adored this movie and we regularly watched it over and over.  At that point, it was just a really cool action movie.  As I grew up, I started to appreciate the acting, the world buildings, the ideas…  It was just an all-round classic.

The flagship show, Stargate SG-1 was a long-running sci-fi show that married the traditional, syndication-style standalone episodic format (there must be an easier way to say that) with the ability to still deliver on bigger story arcs told over multiple seasons.  I think the latter angle would, in the current times of box set binge-watching and streaming media, be even more prevalent if the show came out today.  In addition to the many, many episodes of SG1, there were a few DVD movies released as well.  It was strange at first that the two main characters from the movie were now played by completely different actors with very different approaches to portraying these characters, but before long they really began to embody the characters and, as the year passed, I really couldn’t imagine anyone else in these expanded roles.

SG1 was followed by Stargate Atlantis, which was another fantastic show that really dug into some of the background lore that had previously been touched upon, but never truly explored.  It introduced a lot of new concepts to the show, expanded the lore and technology, and introduced many of us to a young Jason Momoa!

The third and final TV show in the franchise was Stargate Universe.  This saw a group of travellers trapped on an alien ship a long way from home.  It seemed to bring in influences from the reimagined Battlestar Galactica, and it took on a much darker tone than that of previous shows.  It also featured one of my favourite actors, Robert Carlyle.  It didn’t last long, being cancelled after only 40 episodes across 2 seasons.  You know, it feels so weird to say “only 40 episodes”.  I’m British and, by our standards, that’s a damn good run.  It had more episodes than The Office, Blackadder, Sherlock, Fawlty Towers and the The Thick of It.  It’s even more than long-running British shows like Jonathan Creek, and only two less than A Touch of Frost.  But by American standard, this is relatively short, and it certainly falls short in comparison to the 100 episodes of Atlantis and SG1’s 214 episodes.

There was also a web series called Stargate Origins, which acted as a prequel.  I’ve never actually watched this show, so I don’t have all that much to say about it.  I didn’t actually know about it at all until I started doing some research for this post.  I’m going to try to watch some of it to see what I think.  I liked the character of Catherine Langford – a member of the team who originally discovered the Stargate – in SG1, so it will interesting to see how they develop a younger version of her.

Finally, there was the animated series, Stargate Infinity.  As with Origins, I was not aware of this show until very recently.  Again, I’m keen to take a look and see what it’s all about, but it does seem… strange.  I know it’s not considered ‘canon’, for whatever that’s worth, and it’s set 30 years in the future.  I also know that few people connected to the main franchise were involved and it was generally not well received by fans of SG1.

Board and Card Games

Released only in France, La Veangeance D’Apophis was the first Stargate board game and, in all honesty, one that I’m not overly sorry to have missed out on.  The board is quite pretty, but the whole thing seems a little bland.  There’s little information about it on BoardGameGeek, which is not usually a good sign.  The game sees you putting together an SG team and venturing out into the galaxy, calling on the support of allies like the Tollans, Nox, Asgard and Tok’ra. 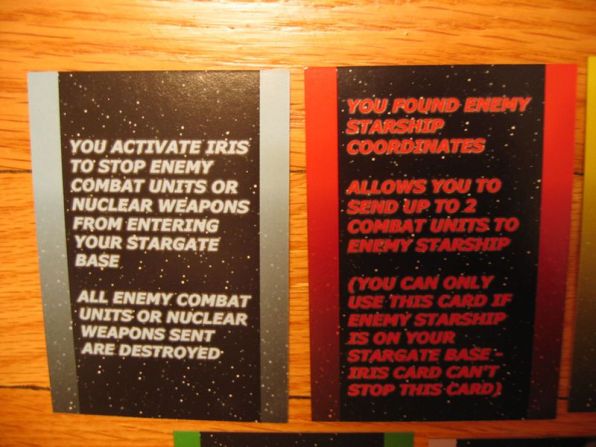 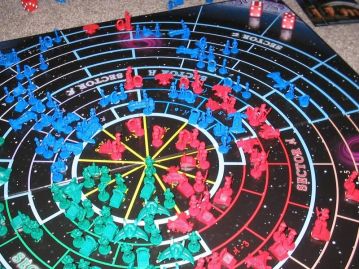 Fleets was a 2004 game of ship to ship combat.  Shortly after it was released, a Stargate-themed reskin was also created, allowing players to field fleets of ships from Earth, the Goa’uld, and the Asgard.  The concept is pretty cool, with players fighting over systems, landing troops, travelling through wormholes and protecting their systems.  The SG1 branding on the game is a little misleading as, unlike La Veangeance D’Apophis, you don’t really field SG teams.  It’s very much a strategic space combat game with some troops involvement.  There was a little of this sort of thing in SG1, but not much.  So then, the game is mechanically interesting (if simple) but not really that thematic. 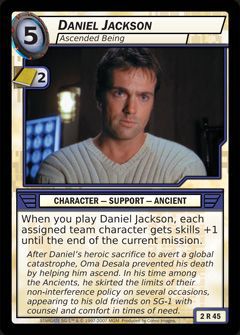 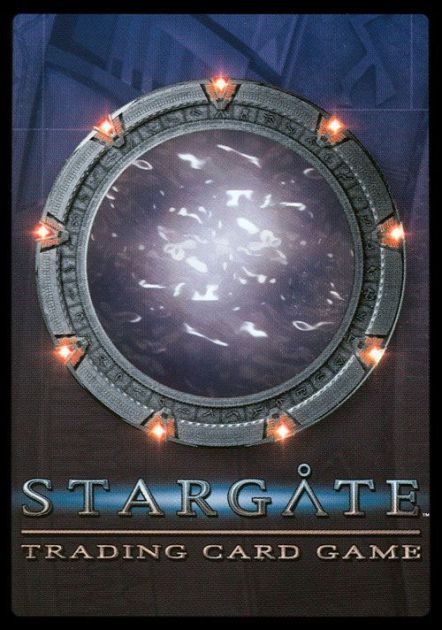 Remember when every sci-fi franchise had a trading card game?  There have been so many TCGs that have started up, never really gotten any real traction and then vanished back into the ether.  Just in the same year that the Stargate TCG launched, there also began TCGs for Bleach, Ben 10, 24, WWE, Kingdom Hearts, MapleStory, and other franchises.  None of these games are still going.

This game supposedly puts a little twist on the format, with each player controlling a 4-member SG team and aiming to complete missions and/or amass experience points.  Whilst the active player controls their SG team, the other takes on the role of the Goa’uld System Lords, antagonising their opponent’s SG team.

In the late 90s West End Games secured the license to produce a Stargate SG1 RPG.  West End Games had produced the original Ghostbusters and Star Wars RPGs, as well as other classic games like Torg and my beloved Paranoia.  West End Games was, by the late 1990s, not in a good way and the company collapsed with around 30,000 words of the Stargate RPG completed.  Of course, the project was effectively cancelled.  You can still find the text of the game via an archived version of the author’s website.

Following the West End Games debacle, the license was later picked up by Alderac Entertainment Group (AEG).  They had published their D20-based Spycraft RPG in 2002 and released their Stargate version in 2003.  A huge 488-page book, the tome included season summaries, information on key worlds, lore about Stargate Command, lots of collected information on the Goa’uld and a ton of cool rules, equipment and tips for running games.  With the core book, there also came a few supplements giving more in-depth information about the first couple of seasons of the show, more information on worlds and adventures and lots more about the Goa-uld System Lords.  Like many of these licensed games, this was a relatively short-lived RPG, as Sony did not renew AEG’s license.  Also common to these licensed RPGs, the core book and supplements actually represented one of the best repositories of background and lore information available, at least until fan-maintained wikis became prevalent.

This brings us up to where we are today.  Wyvern Games has acquired the license for Stargate and have been hard at work producing a new core book.  They’ve chosen to use the 5E Dungeons & Dragons ruleset as a base for their game.  They’ve been running a closed playtest but are now opening things up for a wider group.  Wyvern Games writes:

The Tau’ri need your help in the fight against the Goa’uld. Stationed on an undisclosed location under the control of Stargate Command, you will start your training as a new recruit into the Stargate program.

The Stargate Roleplaying Game is a sci-fi tabletop game where you assume the role of a member of Stargate Command on a Stargate Team. As an SG team member you and your teammates will go on Stargate Missions guided by a Missions Commander in the fight against the Goa’uld. The rules are currently in development and are based on the 5th Edition Open Gaming License. Joining up makes you the first to hear about upcoming public preview events, the Kickstarter launch and other Stargate Roleplaying Game news.

Using the 5E rules for their Stargate RPG ensures that Wyvern is putting out a game with rules that already familiar to a lot of gamers – especially the many new gamers that 5E has brought into the fold.  It’s also interesting to me that Wyvern should use the rules from the 5th edition of Dungeons & Dragons, whilst AEG used Spycraft, which itself was derived from the 3rd edition D20 system.  There seems to be a tradition being established of Stargate games using the D&D rules of the day.

I like the idea of this game being based on an off-Earth SGC.  Specifically, it’s set at Phoenix Site where offworld allies of the SGC are trained in the tactics of Earth.  This means that humans, or least Earth humans or Tau’ri. are not playable.  Wyvern explains:

all playable races are non-Tau’ri. You can of course play a human, but it will be a human from planets like Abydos, Langara or even from new planets. With the different origins each will get abilities that fit their background. Beyond human, we’ll have Tok’ ra, Jaffa, Unas, and a new race known as Aturen.

Given that this is all set quite late in the SG1 timeline, I’m delighted that we’ll get to take part in some of my favourite storylines, but I also have some reservations.  Going forward from where we will be starting, we start to head into some less appealing storylines such as that of the Ori.  Dear God, that was tedious…

All in all, I’m looking forward to this game.  I love the Stargate setting as it has so much amazing lore and lots of room for you to create your own worlds and stories.  If you, like me, are interested in a bit of playtesting, you can sign up by clicking here.

#horticulousslimux built up to lead my #daemonsofnurgle out from the garden of #nurgle and into the Mortal Realms!
First layer of #nurglesrot down on my #daemonsofnurgle #plaguebearers.
Darker bases or lighter for my #daemonsofnurgle? The rot isn't dry yet! Might go faster if I stop staring at it...
My #malleusmonstrorum arrived for #callofcthulhu and it is very pretty :)
Still need to fill the gaps, rebuild necks and elbows and so on with green stuff, but thats my first 10 #plaguebearers built for my Garden of #Nurgle :)
Progress on the #daemonprinceofnurgle :D
Workin' on a #daemonprince of #nurgle :)
Second test mini for #kitbash Garden of #Nurgle army :)
Ew. Guess I need new texture paste...
First test mini for my #ageofsigmar Garden of #Nurgle army.
My clutch of #arachnarokspider minis. Also now base textured and ready to spray :)
A trio of #arachnarokspider minis and accompanying #webspinnershaman.