Paizo and Q Workshop release new Extinction Curse dice set for Pathfinder – I say that they release the dice set for Pathfinder, but that’s just branding.  Pathfinder uses the standard polyhedral dice used for many RPGs, including Dungeons * Dragons.  I say this because a traveling circus is always a nice element in a D&D campaign and these would be good dice to use alongside such a concept: 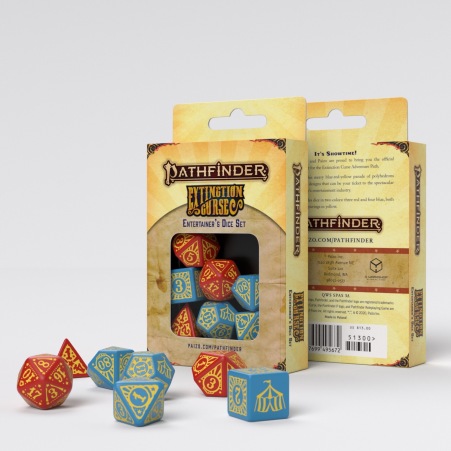 Q Workshop makes very pretty dice, but I’ve often found some of their sets quite hard to read.  This set looks really legible though, so it’s one of their better sets.  I like the mixed colours, too.  Ultimately it’s just a set of dice and will cost you a lot more than a multipack of cheap dice sets on Amazon.  Of course, if you’re here and reading this, you’re probably of a mind that dice are important and that you are willing to pay a little more for the right set for your character…

Fantasy Flight releases new, 2-player edition of Cosmic Encounter – I love Cosmic Encounter.  I mean, I know it’s tumbled down my annual rankings, but that’s not a failing of the game, so much as one of my own apathy and willingness to dig through all the expansion material.  I should probably also try to mend my box, which is really falling apart…

This new, standalone game is a 2-player variant.  I’m curious to see how this works.  I would expect that it will keep the core idea of the aliens each having unique powers that break the core game in various ways.  The thing is, Cosmic Encounter in its natural form is a negotiation game.  There will have to be quite significant changes to really make this work.  Colour me interested.

Goodman Games release new 2020 Dungeon Crawl Classics convention module of DriveThruRPG – When I saw the little thumbnail for this on DTRPG I could tell the brand, but not quite the game.  I was actually hoping it was a Mutant Crawl Classics title.  It’s not, but that doesn’t mean I’m not interested.  I love all the wee Dungeon Crawl Classics modules.  They tend to be delightfully fiendish:

This is the 2020 convention module.  I suppose that most of the conventions have actually been canceled this year, so this might be people’s best chance to play it!  I’ll probably check this out, as I tend to have a flip through most of the DCC modules.

Puppets War releases new 28mm sci-fi Conquistador heads – I love these companies that make little conversion bits.  There are so many cool heads, weapons, and accessories out there.  Puppets War makes some nice stuff, but I really love this latest offering: 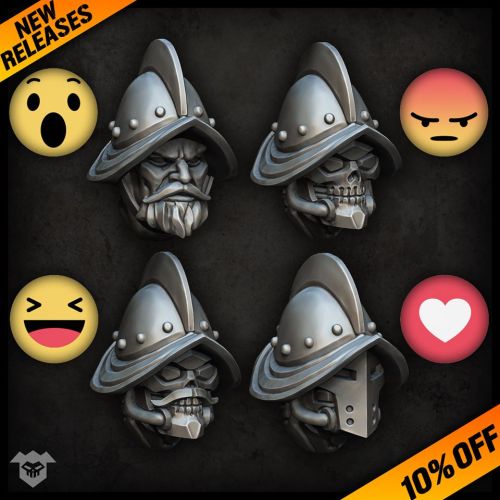 These heads would look great on Imperial Guard.  I mean, even with the standard Cadian bodies, these would work.  I like the variety of heads, but I don’t think I’d like a lot of repetition of that very specific facial hair on the top left one.  The piece is fine, but repetition would be really noticeable there.  All the faceplates look great, but I especially like the bottom right head.

Hansor Publishing releases quick-start rules for Gaia Complex on -DriveThruRPG – The artwork for this game caught my eye and once I learned it was a Cyberpunk game I was definitely intrigued.  Why can’t I get a Cyberpunk game to the table?  Le sigh…

These are quick-start rules for an RPG that will be launching on Kickstarter later this year.  I like the approach that the publisher is taking, making these partial rules available now to start building anticipation for the full release.  I know I’ll be taking a look to see if this is a system that appeals to me or not.

Quick Hobby Update @ Prot’s War in the Warp – A really nice hobby roundup, the author shares their Space Marines, Eldar, and Thousand Sons.  I love the author’s White Scars.  The White Scars are great.  Everyone loves them but nobody seems to want to paint them.  I certainly don’t!  I just couldn’t do the white.  I wouldn’t do it justice.  So many great miniatures in this post.  Thanks for sharing!

Refinery Spruins pt1 @ Brad Isdrab – Reduce, reuse, recycle!  The author of this post uses various bits and pieces of debris with a few GW parts to make.  The terrain all looks great and it’s amazing what the author manages to get out of this ragtag assortment of pieces.  Once it’s primed and painted, it’ll all look pretty seamless, I reckon.  One man’s trash and all that…

My beloved hobby! @ Boardgames That Tell Stories – An interesting take on the hobby.  it is a hobby that rewards – and often requires – a bit of prep work.  Whether that’s sleeving, organising, deck building, whatever.  Yeah, a nice, interesting, relatable wee article.

Word Bearers Obliterators (“Paint the Crap You Already Own!” April 2020 Challenge) @ Dreadaxe Games – The Word Bearers are a fantastic legion.  I like their colour scheme and its background.  I had a Word Bearers army for several years and I liked them a lot.  The author of this post has done a good job in painting up a few Obliterators for their Word Bearers force.  Good job!

Game Management: Running Games Over Skype @ TheDarkElf007 Gaming Blog – What a timely, useful article this is.  I’m running a couple of games over voice chat and playing in a few more.  The feel and the tone (and the behavior) is quite different from group to group.  This article is actually full of really good, solid advice.  Go and read it if you are currently playing (or planning to play) any RPGs online.  Please.  Go.

At NoRerolls, I shared the slow progress on my Adeptus Mechanicus.  Since posting this progress, I’ve not actually had much time to crack on with them either, so this progress remains slow.  This weekend, though!  Maybe…  Hopefully…  Possibly?