So, there were a few Warhammer 40,000 RPGs released by Fantasy Flight Games over the years that they held a license from Games Workshop.  They were all the same system, really, but each with a different focus.  Deathwatch is the game that focuses on the Space Marines, the iconic… icons of the 41st millennium.  The thing is, that license has been revoked, as I’ve mentioned before when talking about these bundles that have been popping up from time to time.

It turns out that the license held by Cubicle 7, the developers of the new 40K RPG, includes the right to sell the older titles as well.  There must be some bemused faces in the RPG team at Fantasy Flight, seeing their books being sold with another company’s logo slapped on them.  Well, there might have been, if FFG had not shut down their RPG team in yet another nail in the coffin of FFG since the Asmodee merger.

Did that sound bitter?  I think that may have sounded bitter… 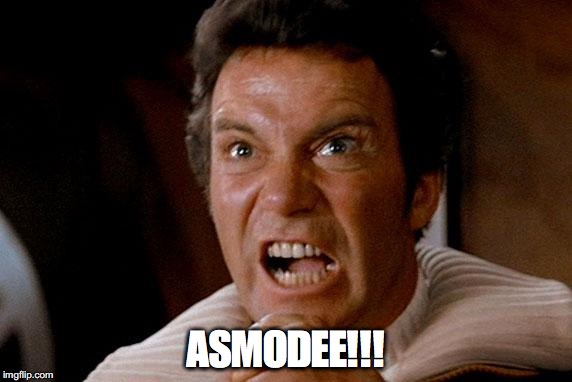 Focusing on the bundle rather than on my tears, it seems to be a pretty good one.  As is normal for all of these bundles, yet as I say again each time, these lovely offerings are broken down into several tiers.  In this case, there are four tiers.  If you buy the first tier, you get the contents of the first tier.  If you buy the second tier, you get both the first and second tier contents, and so on, right up until the fourth tier where you get everything and transcend time and space to become a glowing, benevolent God.  Praise be.

The first tier of the bundle contains the most crucial material and will cost you the princely sum of $1.  It contains three books and a voucher:

I don’t really care about the voucher.  If you have something specific you want from Cubicle 7, this may be good for you, but I don’t much care.  It’s useful, but it’s not exciting.

The most important part of this bundle is the core rulebook.  Like many RPGs, Deathwatch can take place almost entirely in the theatre of the mind, but you do kind of have to know at least some of the rules to make that work.  This is the book that contains those rules.  It’s also a bloody beautiful book, full of really cool artwork and lots of great background material and fiction.  40K fans should be looking at this even if they don’t intend to play, just because it’s a beautifully produced source of background material.  This is a tier that you should really be picking up as either a player or a GM.  Both will find the core book incredibly useful.

This tier also includes two supplements, but their inclusion in the bundle is actually a bit cheeky.  Know No Fear is a historical background source for the setting that was actually released as a freebie by FFG.  Final Sanction is an introductory adventure for Deathwatch which, again, if I hop onto DriveThruRPG, will cost you nothing.

I’m not saying I feel cheated by this tier.  The $1 price tag for the core rulebook is fantastic value.  Hell, even if you have a big purchase to make on the Cubicle 7 webstore, spending the $1 here could save you much more on that purchase.  I just don’t like these free materials being presented in such a way that it looks like value has been added when it has not.  That said, again, $1 for the core book is a fantastic bargain.  Buy it.

Right, we’re into some meatier supplements now.  Rites of Battle is a weighty, 250+ pages of options for players and GMs alike, including material on creating your own Space Marine chapter, extra advanced specialties, more wargear, honours that one’s character may achieve, and more details of the setting.  As I say, loads of cool new options.

Mark of the Xenos seems like a solid choice as well, given that this is the bestiary.  I love bestiaries.  They are among my favourite RPG books, just because there are always so many interesting, bite-sized nuggets of content in there.  This one is no exception, covering not only Xenos like the Tyranids and the Tau, but also radicals and heretics from within the Imperium and the foul minions of Chaos.  There’s a lot in here for the GM to have fun with.

The Emperor Protects and Oblivion’s Edge are both adventure supplements.  oblivion’s Edge is a short book that follows on from the events of Final Sanction, available in the previous tier.  The Emperor Protects is a collection of three separate adventures.  I think The Price of Hubris sounds the most interesting of the three to me, as it encourages a bit of diplomacy, which is not necessarily something that you immediately associate with Space Marines.

This tier is a solid choice for a GM.  You get a few adventures and the bestiary, so you are definitely getting a good deal.  For the players, only Riles of Battle is actually useful, so I’m not sure that a player, at this point, want to go beyond the first tier.

Tier three brings a further five titles into the mix:

I’m always so ambivalent about GM Kits in these bundles.  They tend to be built around a GM screen which is a great physical tool.  I just don’t like paying for digital versions of them.  That said, a friend who is very much into this game does recommend the adventure that comes with it.

He also recommends First Founding, actually.  Perhaps unsurprisingly, it focuses on the first founding chapters, most notably the Iron Hands, Salamanders, Raven Guard, and White Scars.  These are the chapters that can be overlooked at times, so it’s nice that they get a bit of a focus.  There’s also a fair amount of detail about the traitor legions.

The rest of the books are adventures – thought The Jericho Reach also includes extra background for the setting – which give the GM more to do with their players.  With all of this content, you could keep a group going for a long time.

Again, most of the content in this tier is GM-centric, with only First Founding really having much for the players.  Again, therefore, I would recommend this more to the GM.

The fourth and final tier adds a further six titles to the bundle: 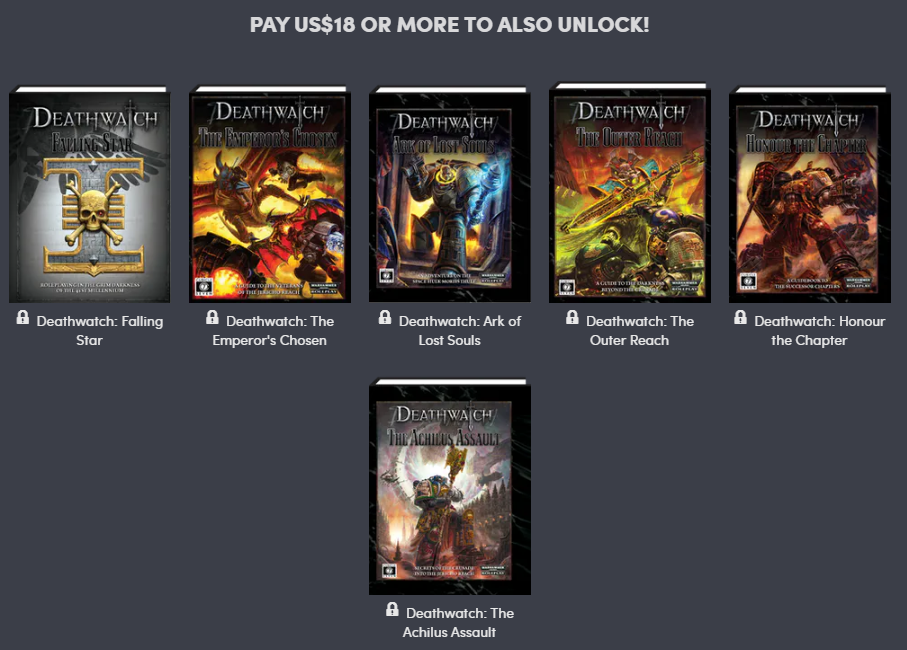 Another book that was highlighted and recommended to me was Honour the Chapter.  Whereas First Founding has a focus on the original chapter, Honour the Chapter looks at the successor chapters.  This includes some of my favourite chapters, such as the Black Templars, Blood Ravens, Flesh Tearers, and Carcharodons.  Like many of the other books in this bundle, this is an interesting read in itself, even if you’re not necessarily going to use it in a game of Deathwatch.

The other highlight for me in this tier is The Emperor’s Chosen.  This is the book for those Deathwatch Space Marines who ascend to the role of a veteran.  it sees the players define their legacies and includes an adventure to let them establish it.  With Space Marines of the Adeptus Astartes already being elite troops, and with those in the Deathwatch being yet more elite, the idea of them becoming a Deathwatch veteran will indeed see the players breathing rarefied air.

There are some more adventures and supplements in this tier, but these are the real highlights for me.  There’s a bit more in this tier for players, as well as the usual GM-centric adventure books.  As such, I’m leaning towards recommending that players do consider buying this tier and, thusly, the whole bundle.

Let’s look at the price.  This tier, which includes all content from previous tiers, costs $18.  If I went to DriveThruRPG, the Deathwatch core rulebook is listed at $59.95, though it is currently on sale for $29.95.  For less than a third of the list price, you get this book and a further 17 items.  This is a damn good deal, and although a lot of the content is aimed at GMs, there is enough player-focused content peppered throughout to justify the purchase – particularly at such a low price.

As usual, some of the money you put towards your bundle will also go to charity.  In this case, you will be supporting Doctors Without Borders – a well-known and well-established charity.

If you are interested in picking up this deal or are just keen to see it for yourself, you can click here to visit the bundle page.  I do recommend it wholeheartedly, especially if you’re a person who is likely to be running a game of Deathwatch.  There’s a huge amount of content here at a very low, more-than-reasonable price.