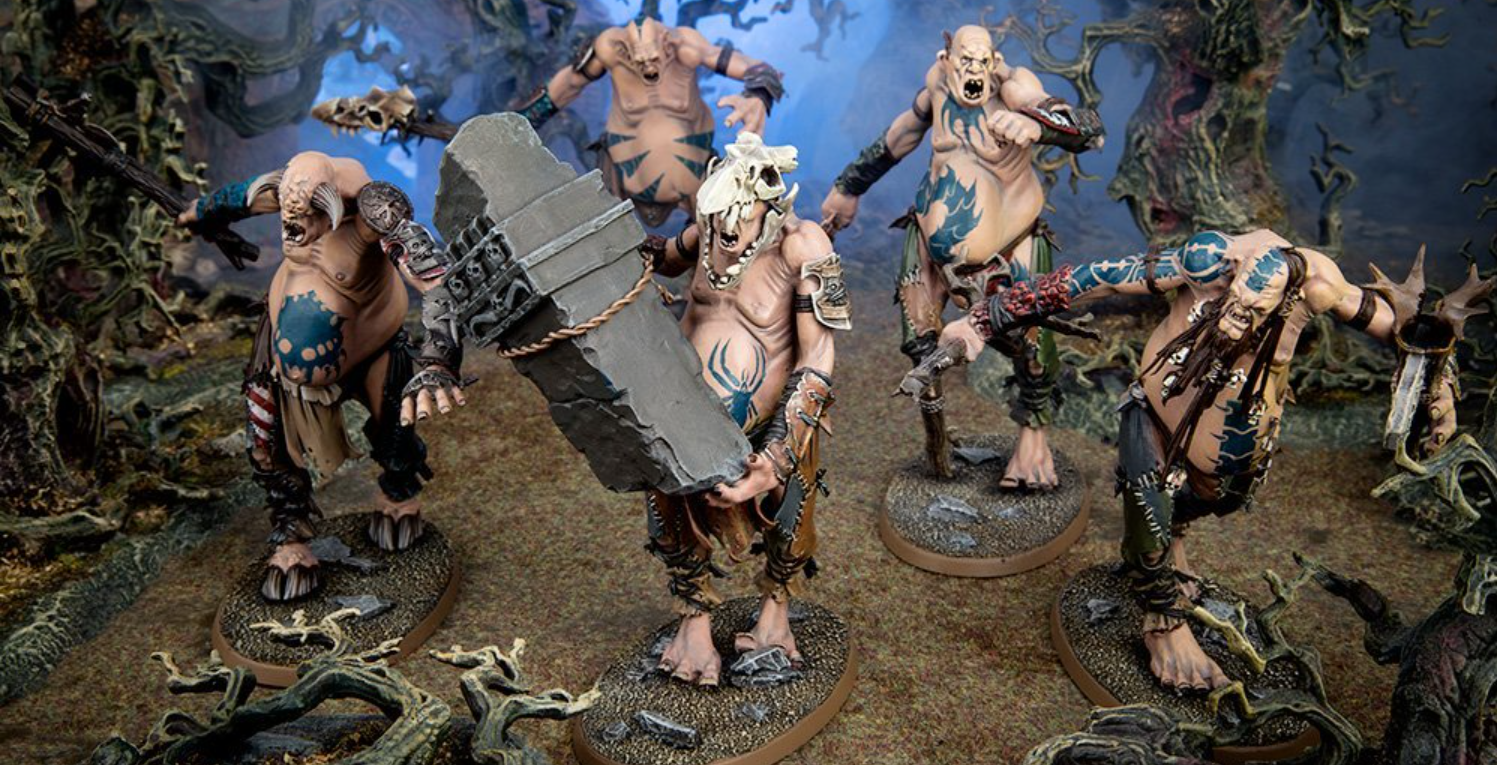 Last year, Games Workshop released a new army, the Sons of Behemat for Warhammer: Age of Sigmar. Now, for those who don’t know, unlike the sprawling SKUs of Warhammer 40,000 (Exactly how many kits are currently available to Space Marines players?), the armies of Age of Sigmar are smaller and more self-contained, usually with only a handful of kits.

The Sons of Behemat take this to the extreme, with only two kits attached to the army, to make a total of four different units. They have a box of two giants and another box with a massive giant that can be built into three different and distinct types of giant.

To go with these two kits – or, if you’d rather, four units – Games Workshop released a full army book; an 80 page, hard-backed tome that includes:

That’s a lot of accompanying material for a pair of kits but, I must say, I love it.

The reason I love it is that I feel that this is something that GW of old would do. By that, I mean the GW that would post crazy new army lists in White Dwarf which doubled down and expanded on a really specific aspect of a Warhammer army. That is how I see this release. It’s Games Workshop’s “so i herd u liek GIANTS…” release.

In celebration on this release, I thought it would be fun to look into some previous examples of Games Workshop releasing mad, incredibly specific army lists, usually through the pages of their monthly magazine, White Dwarf. Now, they’ve done loads of these through the years, but today I’m just going to look at my favourite four lists.

The release of the Ogre Kingdoms army was a big deal back in 6th edition. I remember picking some up and loving the big, chunky models. They were something fresh and new, bringing a big, monstrous army into the Old World. With the fat bois came their diminutive slaves, the Gnoblars – a lowly form of Greenskin. They were fielded in large, ranked units, or as smaller, skirmishing units of ‘trappers’. They brought big, cheap, ranked-up units to an army where many units had a model count in single figures.

It was cool to see White Dwarf put out a thematic army list for the wee guys back in 2005. The list represented an army of Gnoblars who had escaped from the Ogres and were now a force in their own right. There were a number of different miniatures in each Gnoblar box, and these got broken down to represent individual types of unit. For example, the miniature of a Gnoblar riding on another’s back got turned into the Pigback Riders.

The White Dwarf article contained a wee bit of fluff for each unit (see below for an example), lots of special rules to set different units apart, as well as army special rules and a nice selection of magic items. It was pretty well thought out.

Of course, that does not mean that it was competitive! The army has numbers, but not much in the way of armour saves. It also had no magic and, although characters could take magic items, they only had 2 or 3 would for the heroes and lords, respectively. I think you’ll realise that throughout this article, most of the armies listed are “project armies”. You know, like thematic forces that make a cool army project, but which don’t necessarily perform well on the table, particularly if you’re looking for a competitive force.

Still, this was a nice idea and it was really cool to see the complete army in the magazine spread.

As with the Gnoblars, the Kroot came along as part of another army that was dominated by another race. Whilst the Gnoblars served the Ogres, the Kroot were an allied race of the Tau. They were portrayed as mercenaries who would kill and then eat their targets, often taking on some properties of the consumed beings through genetic adaptation. In the original Tau codex, there was a single unit of Kroot Mercenaries, to which you could then attach the doglike Kroot Hounds and the lumbering, heavily armed Krootox.

Following some articles about converting Kroot variants, White Dwarf produced an army list entirely consisting of Kroot Mercenaries. They drew from existing models and added a number of new variants. The most famous of these variants was probably the winged Vulture Kindred.

The Kroot had a lot of fans, including one in my own gaming group, so this army list was met well and it seems that quite a few folk actually put an army together. It also introduced the Master Shaper as an HQ choice that would subsequently become part of the main Tau codex.

This is a really good example of taking a relatively minor-but-popular part of an existing army and fleshing it out. It has personality and charm, and was simply cool. It’s a pity that in the many years since this list was published the Kroot have been very much neglected by Games Workshop.

So, first of all I love the Skaven. They are one of the most interesting races in Warhammer. I especially love the differentiation between the great clans, as each one really does have its own personality. This article focuses heavily on Clan Moulder, the clan that shapes the beasts that the Skaven field in battle. Their home, Hell Pit, is a place of genius and madness in equal, if horrific, measure.

This list is built around a special character, Ghoritch. Ghoritch, the Castellan of Clan Moulder is a compulsory pick for the army. He is a berserker of Khorne whose mind was transferred into a might, augmented Rat Ogre. In addition to his rules, the article also has a little conversion guide for the beast. It even had a link to a store page where you could buy all the bits you would need to build him. This sort of thing was not unusual back in the day. For example, alongside the Kroot list, you could order a conversion kit for making Vulture Kindred.

In addition to Ghoritch, the army consisted of your usual Clan Moulder units, such as Giant Rats and Rat Ogres, but also introduced a number of really cool monsters. The best two of these were the Burrowing Behemoth and the Chimaerat. I mean, how cool is the idea of a Skaven army fielding these big rat-beasts?

I would like to believe that these beasts were at least part of the inspiration for a Skaven unit that would come much later, the Hell Pit Abomination. I mean, maybe it didn’t, but it’s an idea that I like. There are also a number of cool variant Rat Ogres, including armoured ones, mutant ones, and more augmented ones. Again, we can perhaps see the root of more future units, with the augmented Rat Ogres being able to carry Warpfire Throwers, much like the Stormfiends who would later be added to the Skaven range.

This article is probably my favourite of the White Dwarf article lists. it keeps the core of a Moulder army from the Skaven book and builds on it wonderfully. It adds some units that represent only a slight variation on the standard units, along with some really special and impressive new units. It has a cool character to tie it all together. It has loads of examples of conversions to spark your creativity. It’s just so well put together, well thought-out, full of character and plain damn fun.

A close second place for my favourite White Dwarf article list, the Vampire Coast is another army that is based around a key central character. In this case, it’s Luthor Harkon, a vampiric pirate lord. As with Ghoritch in the Hell Pit army, Harkon is a compulsory lord in this army. His rules are also really fun, though a bit random thanks to his Split Personality rule.

I like the idea of these specific lists being built aorund a single character. Really, it’s not much different to some lists from older codices, wherein the use of a sepcific special character – or specific non-named HQ/Lords – would turn one of more non-core units into core. For example, Throgg, King of the Trolls, made Chaos Trolls into core (rather than special), thus allowing you to field a Troll army.

In this case, it’s Luthor Harkon that lets you bring the pirates, and the plethora of cool, new units that come with them! Some highlights include sea siren-esque Syreens, the Zombie Deckhands, the exploding Bloated Corpses, a number of cool, thematic missile units and the bizarre Deck Droppers which consist of Fell Bats carrying Zombies.

Along with the list, there are a ton of cool, converted miniatures from a few different people. I love how characterful these miniatures are. It’s also cool that some of these are by Rob Hawkins, a devout collector of Undead miniatures who runs a fantastic hobby blog. His Deck Droppers are really cool:

This is another really fun list, and one which opens the door for a lot of conversions. You’d need to do conversions for a lot of the miniatures in this list – especially the missile units which were not really represented at all in the miniatures range. I also love that the Warhammer: Total War video games have embraced and included Vampire Coast armies among their playable forces.

So, first of all, I skipped a lot of similar lists in the writing of this article. For 40K there were great lists like the Feral Orks and the Lost and the Damned. For Warhammer, the biggest thing I skipped was the entire Storm of Chaos book. It was an amazing book that introduced load of cool, specialised lists. it was also the first book that made Chaos Daemons properly competitive on their own.

The future of this sort of list seems mixed, very much depending on the game in question. I think AoS is perfect for this sort of thing, and really books already encourage it. Think of some of the subfactions in these books and the batallions that encourage tight theming. Clan-specific Skaven forces, Gloomspite Troll, Squig, or Spider forces, Beastclaw Raiders, the whole Fyreslayers army and, well, loads more.

40K is more of a problem for a few reasons. First of all, the armies are generally bigger with a lot more entries in the coedex, as compared to AoS army books. There’s also the factor of the community. Generally, competitive 40K lists are so much more about breaking the game in specific ways and many ‘good’ lists will focus on spamming individual units. I think that any of these lists that is not terrible will be jumped on by a community keen to break the game in whatever way they can for a marginal advantage. The solution, I suppose would be to make the lists “unofficial” for events. This is a problem that has been very much exacerbated by the increased ubiquity of the internet. There were online Warhammer communities at the time of these lists, but the ubiquity of such such communities, and the toxicity of the hypercompetitive end of the fanbase have both increased significantly since then.

So, all in all, I don’t think we’ll see as many of these lists in the future. They seem impractical for 40K and GW are already kind of doing this within their army books for AoS.