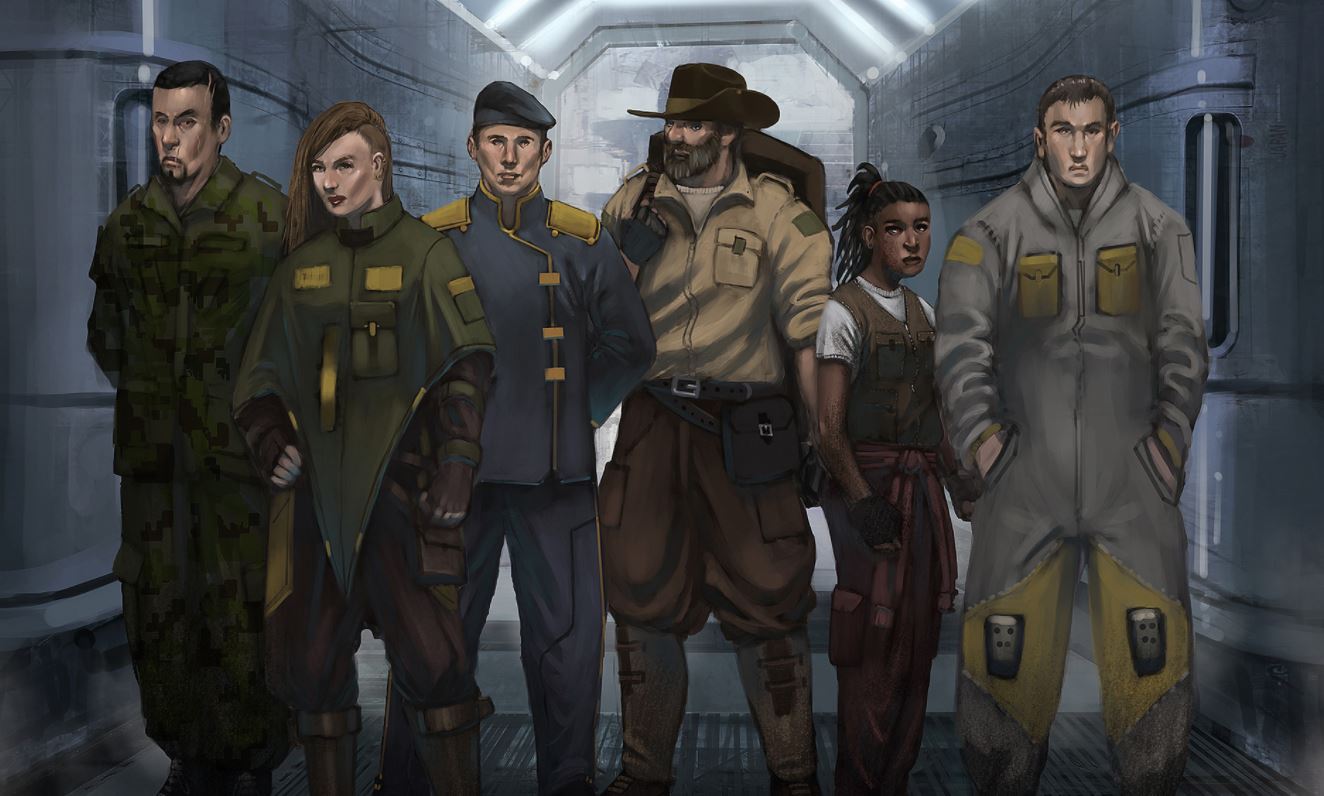 Traveller is an RPG originally released in the 1970s, a few years after TSR’s Dungeons & Dragons first hit stores. Since then, it’s had several different editions, versions, spin-offs and the like, produced by a number of different companies. The current edition is the second one by Mongoose Publishing. I really like these books and have all of 5 the ‘core’ ones, plus a GM screen and the Pirates of Drinax boxed set. I will be picking up some more adventures and campaigns in the future, though I don’t think I will grab them all, as I do with D&D.

So, I kept telling people for the next year or so that I would be running a game of Traveller. I planned out a campaign based on some books by John Scalzi and then… I didn’t run it. Just never quite brought myself to it.

Now, I’ve finally gotten around to it. Got a few guys from our local group and we spent last Wednesday writing up some characters and doing an initial scenario. The thing about Traveller is that character creation is quite… involved. Rolling up some stats and choosing some initial skills are important parts, but that’s just the start of the process. You go on to actually play out, via tables and dice, the life that your character leads in a series of four-year blocks. Here’s a handy-dandy flowchart to explain the process in a clear and concise manner:

It was actually a lot of fun doing the characters. We ended up doing them together, working through one four block term at a time, going round each player. It took a while, but after the first couple of terms the pace was actually pretty good, and we quickly found character backstories forming before us.

We ended up with three characters:

Now, the campaign itself is based on some of my favourite novels. I encourage any of my group who read this post not to read the books, at least for now. Anyone else, you should totally read them. They are the Independency series from John Scalzi:

I really like the setting, and how the political system of the Holy Empire of the Interdependent States and Mercantile Guilds is shaped by the spatial anomaly known as The Flow. Here’s a nice summary from Wikipedia:

The Interdependency is a thousand-year-old human empire of 48 star systems connected by the Flow, a network of “streams” allowing faster-than-light travel. Each stream is one way and has an entry point and an exit point. There is no faster-than-light communication faster than the Flow, and interstellar trips are not instantaneous—ships carrying mail or passengers from Hub, the capital of the empire and the system with the most Flow connections, arrive at End, the most distant, nine months later—but the network permits life-sustaining intersystem trade. As a natural phenomenon, the Flow is poorly understood; Earth disconnected from the network thousands of years ago, and civilization on another system collapsed more recently when its pathway suddenly closed.

Family-owned megacorporations control all interstellar trade in the Interdependency’s mercantile economy; one, House Wu, is the royal family. The trading houses are incredibly wealthy from government-sanctioned monopolies and by collecting tolls at “shoals”, entrances and exits to Flow pathways. The state religion, with the Emperox as titular head, celebrates the Interdependency as a divinely sanctioned society.

The initial session began with the party on a shipping vessel, the Tell Me Another One, as it undertook the 9 month journey to End, the furthest-flung planet of the Interdependency in order to deliver some weapons to the reigning Duke to help him put down an uprising. Here’s a portion of the map that I made, showing the flow shoals from Hub, the capital of the Interdependency, to End:

The party awoke to a mutiny. Alphonse immediately recognised what was happening because, of course, he’d been through this a number of times before. He relished it, actually, and immediately grabbed his weapons, pulling the others with him in his wake. Pom questioned a crew member who was transporting cutting equipment up-needle towards the bridge. He established that the first officer intended to commandeer the ship in order to sell the weapons to pirates on arrival in the End system, claiming that the ship had suffered catastrophic damage which had killed the captain and her more loyal officers. The intention was to claim that they were then boarded by pirates, giving the mutineers an excuse for why they no longer had the weapons.

As the part advanced, they saw the first officer and his men cutting through the blast doors that protected the bridge of the Tell Me. In this moment, they chose a side, with Alphonse throwing his stun grenades into the densely-packed group of men who had gathered around the door.

Most of the first officer’s minions were taken out by the grenades, leaving only the officer himself and one of his supporters standing, suddenly a lot less confident and a lot more vulnerable. As the cutter finished off its work on the blast door, the party and the remaining mutineers exchanged shots and Alphonse was badly hurt. Out of character, I don’t think the player realised quite how much being shot hurts in this game.

Before the players or the first officer could finish each other off, the ship gave a violent shudder as it fell out of the Flow. This, Oskar informed the party, was unheard of and would condemn the crew to certain death. Beyond the Flow, there is no faster than light travel, so being stuck between star systems would mean a slow and lingering death for the crew, now centuries from any inhabited system.

The party and the first officer joined the captain and began scrambling to rescue the ship. Oskar found an opening the Flow shoal that was both shrinking and moving away. Pom began chasing this shoal to try to re-enter the Flow before it could shrink away to nothing. Alphonse, an engineer by background, began isolating the habitat ring so it could be abandoned if need be in order to fit through the narrowing opening to the Flow. In a concession that I enjoyed, Pom actually stood aside from the console to let the first officer fly the ship in, having heard earlier what an exceptional pilot he was.

The efforts were met with success and the ship, minus the ring, made it back into the flow. As the bridge crew celebrated, the captain embraced her first officer before unloading a small dart thrower into his eye, killing him. Her authority re-established, the party spent some time clearing up the remaining mutineers and then settling in for the remaining 7 months of the journey. In this time, the captain also decides to adopt the plan that was set by the mutineers, to sell the weapons to pirates on arrival in End.

As the Tell Me Another One emerged from the Flow, we reached the end of our session.

This felt like a good start. People felt pretty engaged and things were fun. Being stuck on a ship in the flow with a key event going on, there was not much freedom for the party. Going forward, things will be a bit more open most of the time, but this worked well for an opening session. It was a good chance for us all to learn the rules and get used to how things worked. I’m looking forward to seeing what happens next!