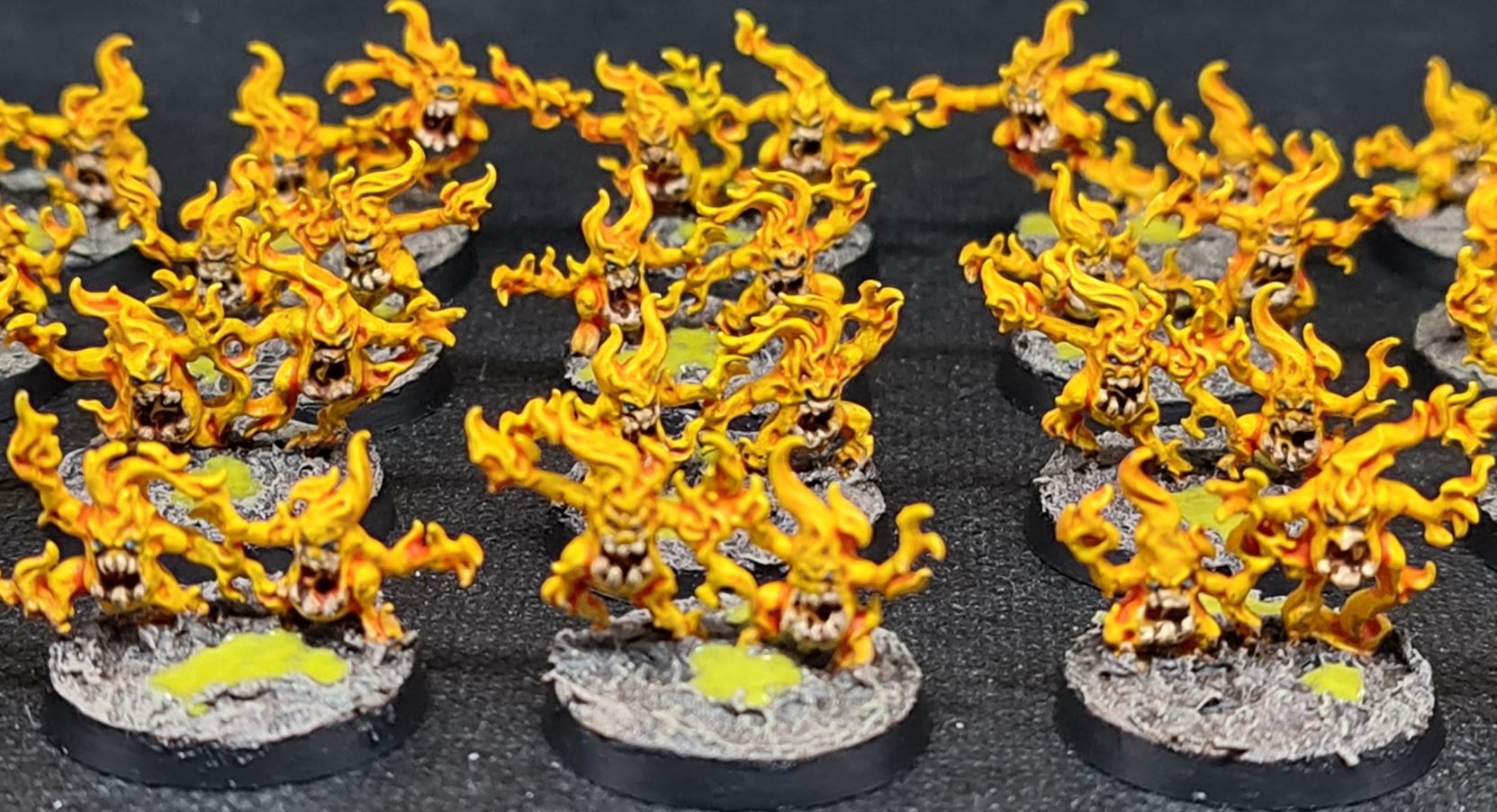 I’ve not been around much for the past week! Work’s been busy and I’ve also been a bit ill. Not Covid, I hasten to say! Other than fatigue and other annoying symptoms, I was finding a significant tremor in my left hand, making painting very difficult. So yeah, didn’t get much done.

Instead of going on with painting that I just couldn’t do, I decided to do a bit of work on bringing some of my Tzeentch stuff up to snuff. Not everything, but just the bits I could see myself using. I dug out the following items:

Now, 80 Pinks Horrors is just not worth it. In fact, at 250 points per 10 models, that’s 2,000 points. When I first bought them, those same 80 represented 1120 points. The game was quite different then, as was the unit and the nature of summoning and splitting. Because of the difficulty in having Pink Horrors split at the time (you had to have points in reserve to draw from), I never planned for it, and so I had the Pink Horrors, and then I had the units of Brimstone Horrors to use as screens and objective holders. This means that what I’m missing are the Blue Horrors. I’ll get around to them.

I started by picking out 40 Pink Horrors. These are realistically the most I’d use at the moment. The others, I’ll put aside for now. They’re actually painted in two different ways. One of these sets of 20, I started painting with my initial Tzeentch force when I first got into AoS. These are darker and dirtier than the next 20, which are much brighter. I don’t mind the differences. It’s Tzeentch. It’s fine. I rebased them all. Many of my Horrors were eBay rescues. They came from a job lot of very neglected Daemons which chunky paint all over them. They were also still on bases, which I replaced at the time with round MDF bases. I started by cutting them from their MDF bases and rebasing on plastic ones, before building up the swamp bases that I use for all of my Chaos forces. I then started cracking on with touching up little final details and things that had been abandoned unfinished a few years back.

I’m still working at this stage, but have managed my first 41 miniatures. The painting is a bit rough in places, and I think I’ve come on a bit in the past few years. That said, you can really see the roughness in some of the Pink Horrors, and definitely in the Changeling and Changecaster. Still, I’m not here for a repaint. I’m just finishing off and making them usable.

The Changeling was one of the first models finished:

He’s the old metal model and one of my eBay rescues. He had to be cut from his MDF base and despite some slight funkiness on his shoulder, he looks pretty good on his new base!

Next up, I finished up the Brimstone Horrors. There a 40 of these wee blighters, and they needed teeth and eyes picked out and then basing. This was pretty minimal, with all of the lovely yellow already done:

Actually, on the Brimstones, here’s a quick video I stuck on my new TikTok account once I’d finished them up:

I didn’t expect to be working on these items this week. It’s the most interesting hobby stuff, but I’m liking the feeling of getting stuff finished off, you know? Next, it’ll be the pink horrors. The more puple-ish, older ones are nearly done and only really need basing, and I’ve already done the annoying sections of that (texture and wash). The drybrushing stages are quick, easy, and fun. The newer, pinker Pink Horrors will need a bit more work as I will have feathers and the like to pick out.

I could probably finish the first set tonight, but I’m still not 100%, so I think I’m just going to turn in early.

I did manage to get a wee game of Age of Sigmar this week, with my Nurgle lads facing off against 1500 points of Flesheater Courts.

Again, if you’d rather see these pictures in video form, I also stuck them on TikTok:

I enjoyed the game. The pre-game move for Drowned Men is particularly great in scenarios without a “no-man’s land” in the middle. Having those adjacent territories allows your airforce of flies to quickly close the distance and slam into enemy forces. I didn’t think I’d be alpha-striking as Nurgle! The command trait that allows your general to block out the issuing and receiving of orders is also fantastic. I took magic, but I’m glad I never relied on it as I was just outclassed in the regard by the Flesheaters. it was a good game and a decent win.