With my computer woes banished, for now, it’s time to dust off this old chestnut and share what I’ve been up to for the past week.  Then again, given that I’ve not done one of these in a while, it’s really more than a month that we need to catch up on.

I’m not going to do things in order, but rather just nip through by theme.  With that said, let’s take a look at the board games I’ve been playing for the past few weeks.  I’m not including pictures of Pandemic Legacy in this summary, as I know people get quite annoyed when presented with potential spoilers.  First up from the games that I can share, this week’s playthrough of 1960: The Making of the President: 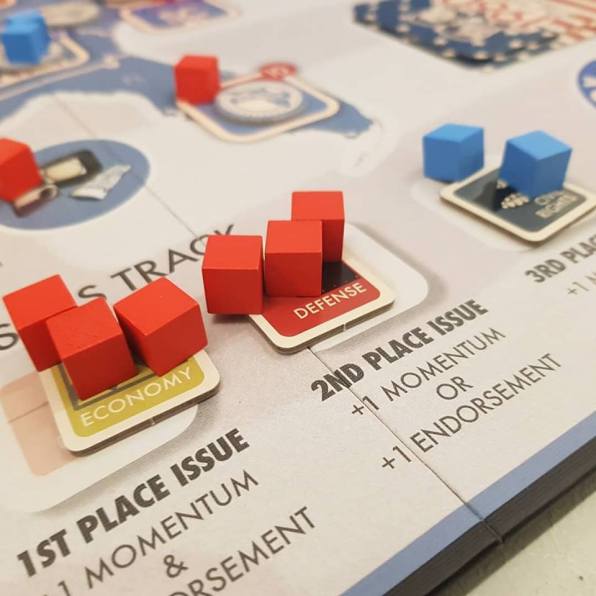 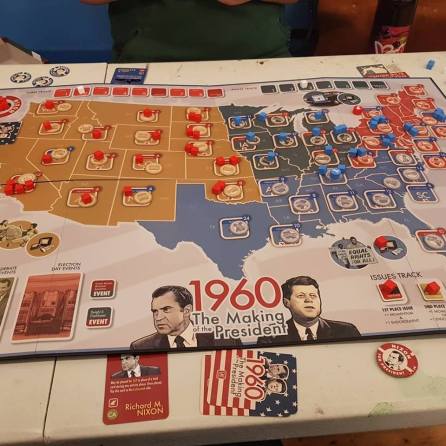 I played as Nixon and remain undefeated as Tricky Dick.  The game was quite close and we saw a lot of back and forth.  New York was probably the biggest single battlefield state, but I think the focus on it and my opponent’s determination to hold New York for Kennedy was one of the major factors that contributed to my victory.  She simply spent too long and too many resources holding it, whilst I picked off the smaller states.

Whilst we were playing 1960, others broke out the X-Wing Miniatures Game for some pew-pew space battles.  It was cool to see the second edition on the table: 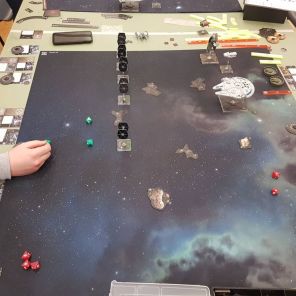 The new, shiny Falcon is nice to see, and the little shuttle thing (I haven’t seen Solo) that pops out of the front seems really good.  I was mostly playing 1960 as this was on the table, so I didn’t really follow the games too closely. 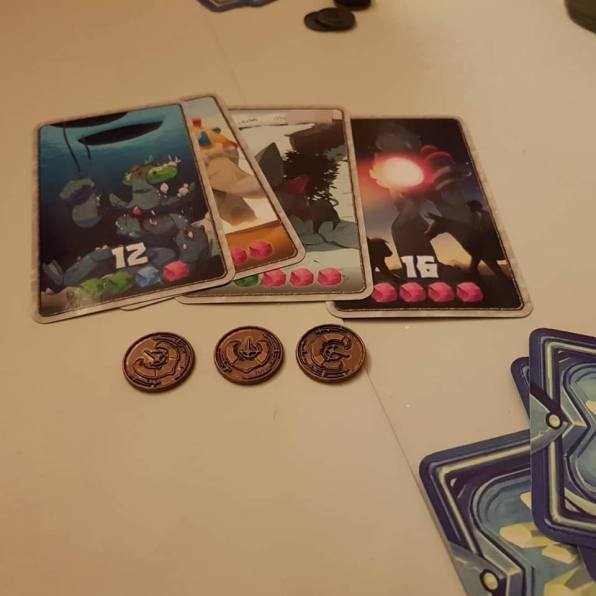 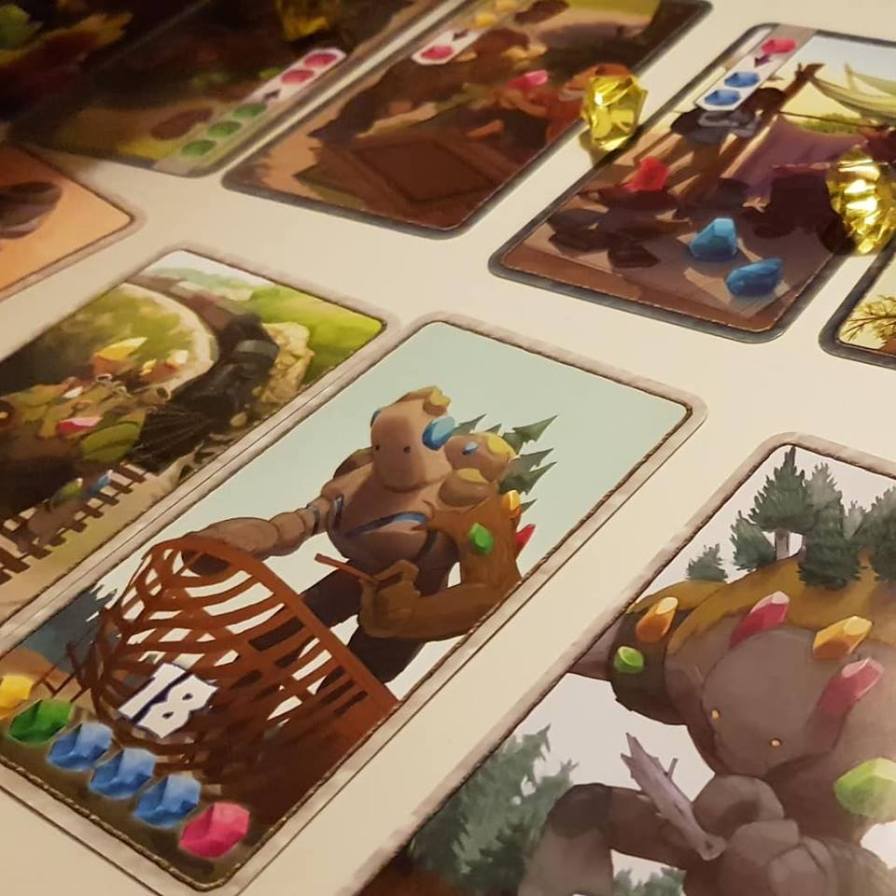 This is definitely my most played game of the year.  I just seem to get it to the table a lot, and no wonder.  It’s quick, easy to learn, variable and, as I have previously written, beautifully illustrated.  Still one of my faves!

Another of this year’s most played games has made it back onto the table, too.  Terraforming Mars has been a constant fixture this year:

Every game of this still feels fresh, so I’ve still not picked up any of the expansions.  I’d like them, I suppose, but I don’t think I really need them yet, if you know what I mean.  I like trying out all the different corps, but I also like revisiting old ones and trying to optimise them a bit.  I also like adapting to the cards I get in any given game, which are really the biggest and most interesting variable factor in play.  Great stuff!

A third perennial favourite also made it back onto the table.  Star Wars Rebellion has held the number 1 spot on my top 50 games list for the past 2 years, so I’m always delighted when I get to play: 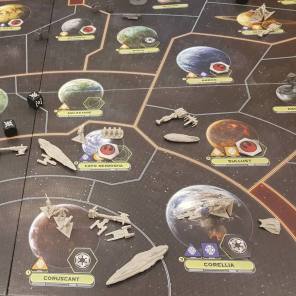 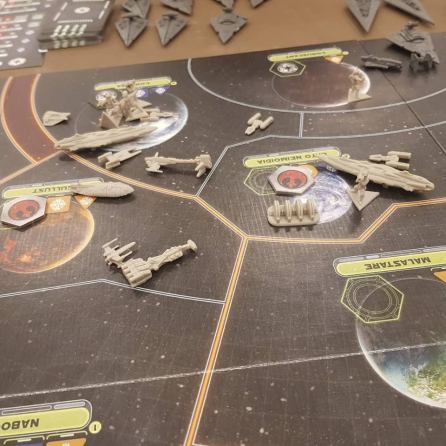 It was nice to play as the Rebels for a change, and I managed to squeeze out a win.  I tried to play aggressively and it really paid off.  I took most of the core systems and held Coruscant for much of the game.  Despite this, the Empire player did a good job of reaching out to the outer ring and really searching for my base.  The game was ultimately quite close, though my board control was pretty good.

I also got a few plays of a game I don’t own.  Endangered Orphans of Condyle Cove is a cool, simple little game with a good sense of humour:

The first of our three games was pretty quick and, having largely forgotten how to play it, I did not to well.  Like, not well at all.  Like, bad.  I did pick it back up pretty quickly, though, and won the second and third games.  I keep withering over buying this game, but I worry that there’s just not enough to it, and not enough variety to really keep me going with it in the longer term.  I think I’d get bored.  As a once-in-a-while game, it suits me fine.

In addition to the various board games I’ve been playing lately, there’s been a lot of RPG stuff making it to the table.  Of course, Dungeons & Dragons is a big part of this: 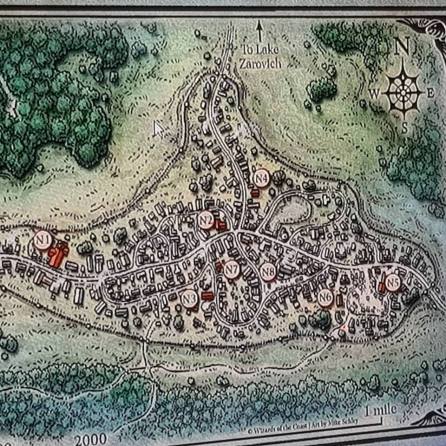 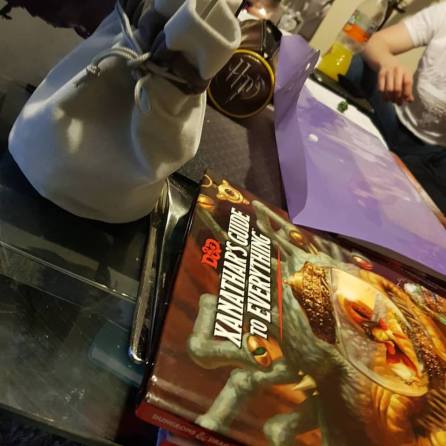 The Strahd campaign continues apace, with us starting to find some of the key items that will see us on our way to confront and, we can hope, defeat Strahd.  It’s a good group of people and I’m really liking the DM’s style.  I’m also getting a better handle on my character, a Warforged paladin, as we go on.

We’ve also been playing some Adventurer’s League.  This is my first try at this sort of play and I’m generally enjoying it, but some reservations: 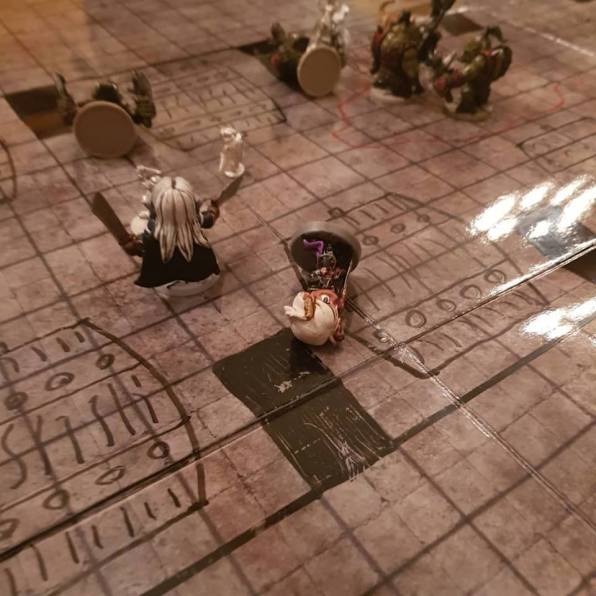 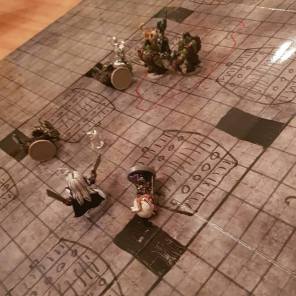 The big thing, and really the only thing, making it a bit tricky for me, is that I find myself really preoccupied with the time limit that is placed on the game.  The time limit is important, but I worry that I’m overthinking it and allowing it to dictate how I play and cutting down on my character play – if that makes sense?  The DM is great and we’re really enjoying it, but that was a major issue for me in our first session.

We’ve since done our second monthly session and it went a lot better for me: 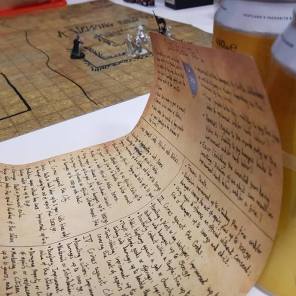 I was able to get more involved, be a bit more creative and generally enjoy myself more.  I’d say that the start of the game saw me have the same problems, but I overcame better this time.  I’m enjoying this character, and I’m liking the adventures.

Our Wednesday night campaign carries on as well.  This is a great group, and I really like the campaign: 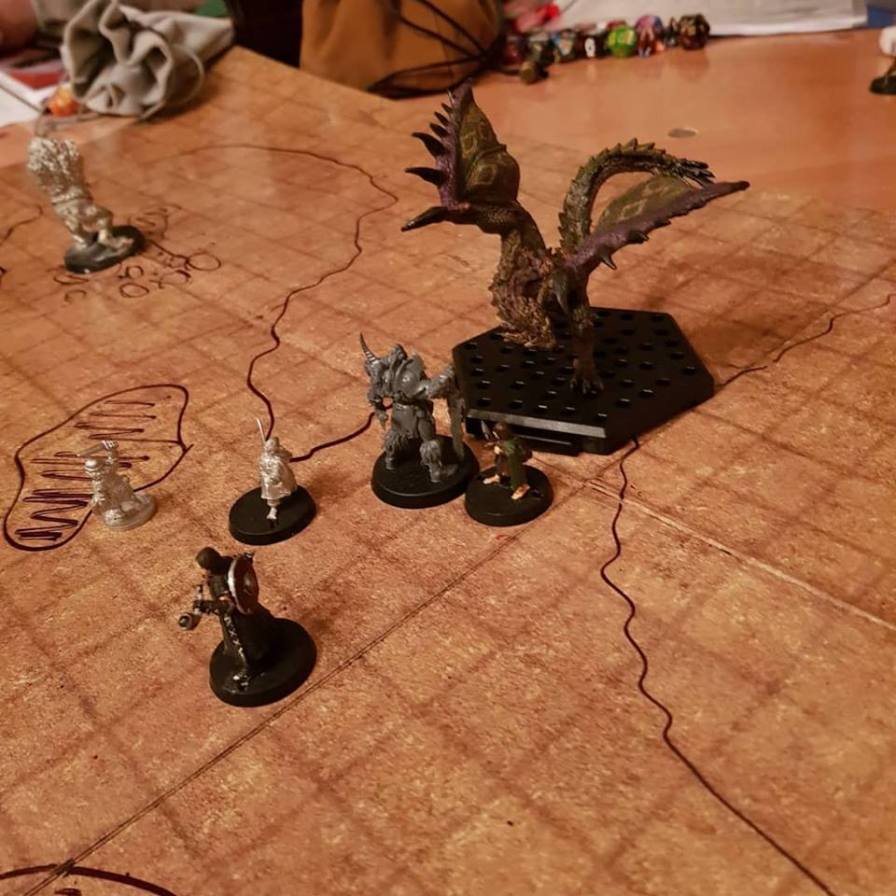 We’ve had some pretty strange encounters in recent weeks, with a Deck of Many Things being introduced and resulting in some pretty drastic changes to the setting.  My Cleric, Harrel, was granted a wish.  He wished that others in the major city that he was in would just love Blibdoolpoolp as much as he did.  The city was suddenly replaced by a fortress-like citadel of blackened spires and oppressive patrols.  Oh dear.  Let’s see how this goes…

This group also had a really good Halloween session, exploring a haunted house: 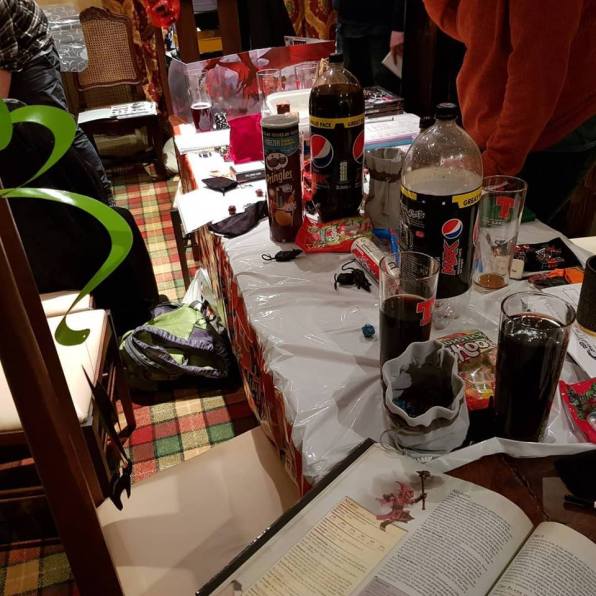 This was another fun session, and one with a lot of quirky goings-on.  We also switched up our location, putting out decorations, coming in costumes and sharing piles of food.  Was a great night!

On one of our off-weeks, I ran a pirate-themed game of Paranoia: 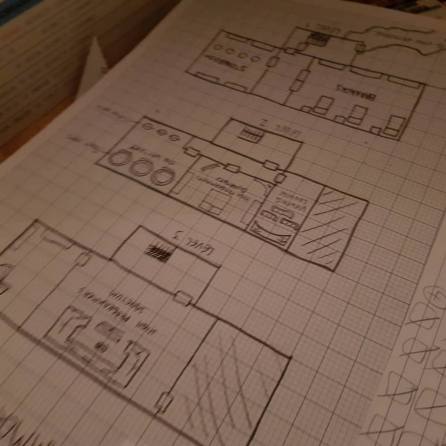 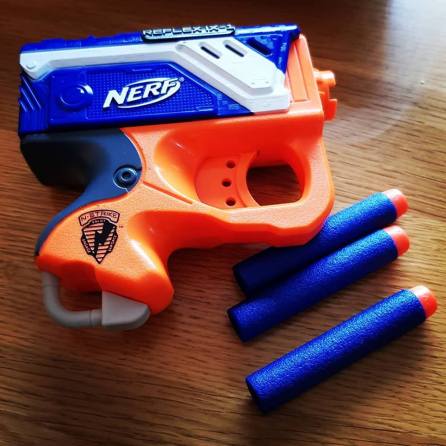 The game went quite well, with players exploring a huge, underground cavern under Alpha Complex on behalf of Cap’n Computer.  I was delighted with players taking some creative decisions in the face of several problems and puzzles.

Later, when I was visiting family down south, I picked up 5 little NERF pistols to be used by Paranoia players when executing one-another.  I think this will be a fun addition to my games!

I didn’t get any pics of the table, but I also recently started a new Dresden Files campaign: 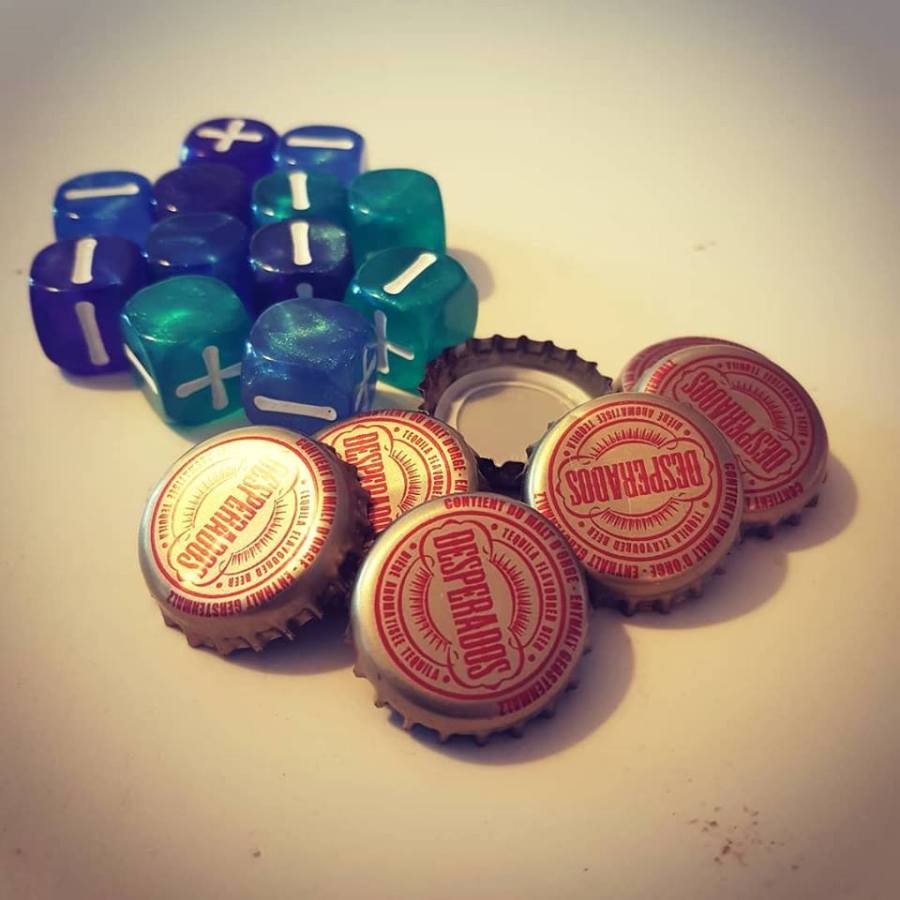 The first session went really well.  I love the Aspects system from FATE, as it just gives me really easy handles on player characters that I can push or pull as required.  The players have a really good mix of characters, too.  They complement each other well and I really enjoyed our initial session and am really anticipating the second one.  So excited! 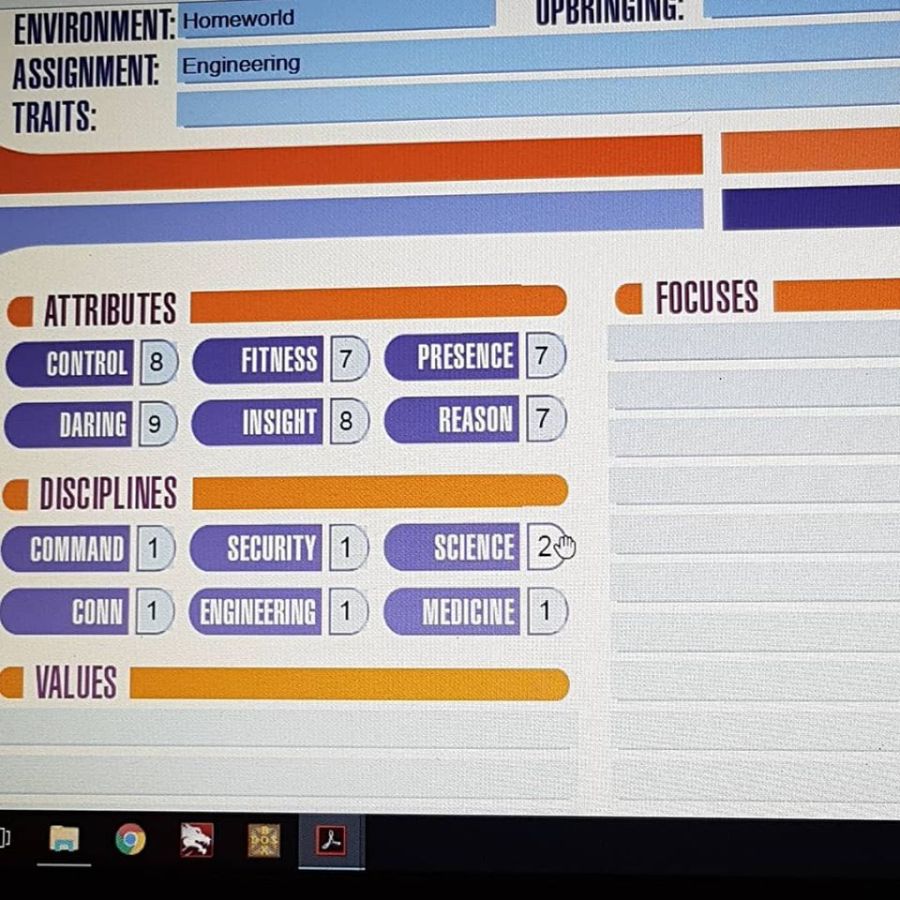 I don’t have a lot to say on that, as I don’t know much about the game.  I’m enjoying playing around my Bajoran engineer, though!

When south, in addition to NERF guns, I also popped into Static Games/A1 Games to pick up some books!  Lots of good deals: 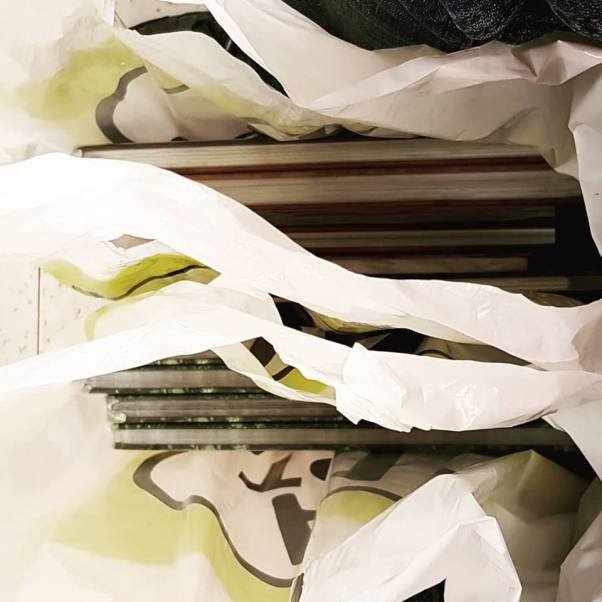 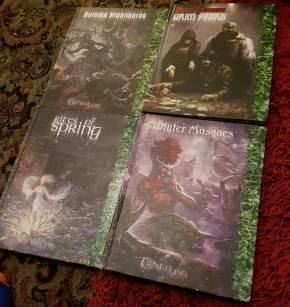 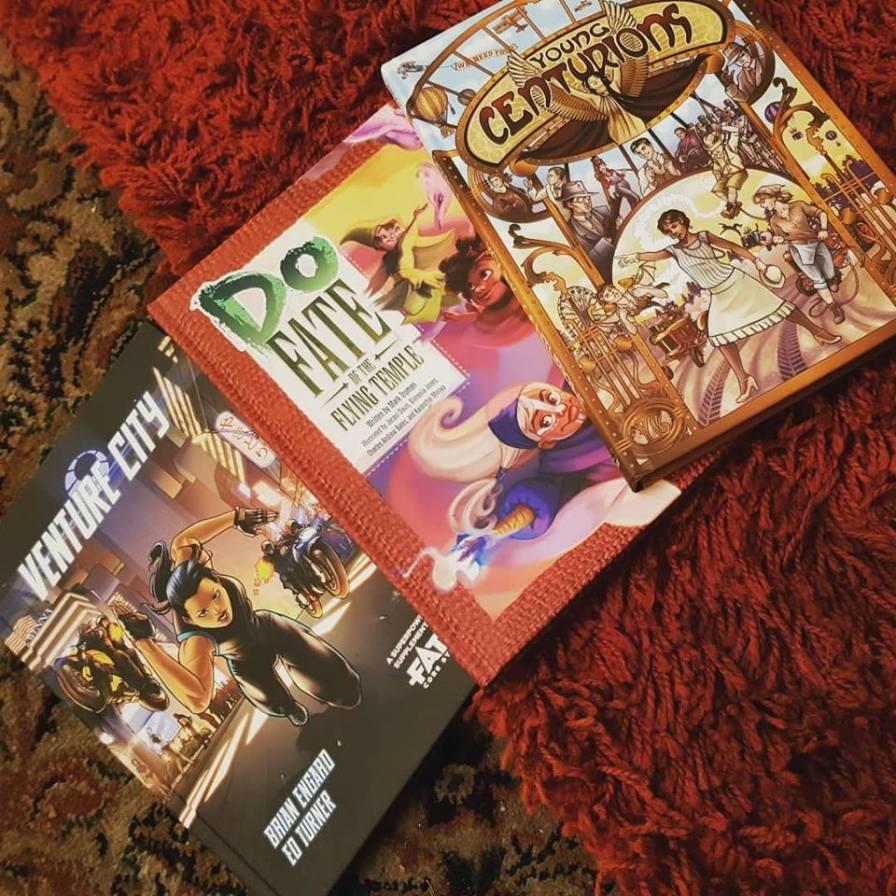 I found a couple of Werewolf: The Forsaken books that I did not have, along with four Changeling: The Lost books.  I also found some nice, cheap FATE books.  Venture city for a fiver was a real highlight, as it’s been in and out of my Amazon basket a lot, lately.  Getting it for a third of that price was pretty sweet.

I broke out the Tzeentch Daemons for a game of 40K, as well.  This was my first time playing against Dark Eldar: 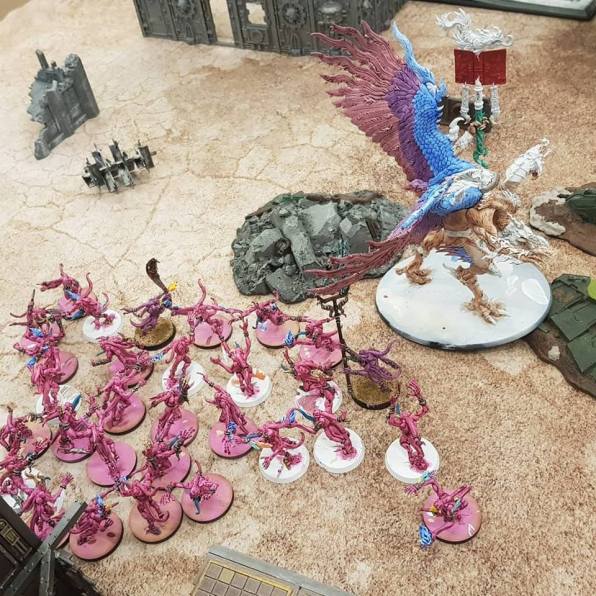 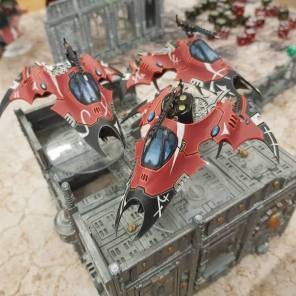 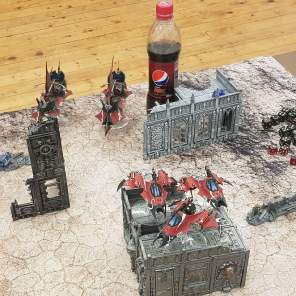 The game started pretty well for me, and I pushed forward and took the objective early.  I was then destroyed by the shots that the Dark Eldar were able to put out.  Just, like, ouch!  I enjoyed the game, but yeah, I was outplayed.

I played some more games in the 40K setting with my first try at Killteam.  I borrowed another player’s Death Guard to face off against some Dark Angels: 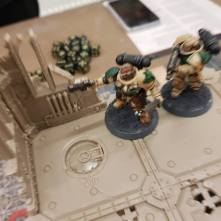 This one started badly for me, and I lost a good model early in the game.  Once I had a better idea of the what the game was about (cover and modifiers), I adapted what I was doing and focused on survival and holding objectives.  It started going very well for me, but ultimately came down to a single round of combat which would have made the difference between a tie and a win.  Thankfully, I won that combat and my win was secured.  I had fun, and I really should get my own set built.  I mean, it’s sitting behind me right now… staring… always staring…