These miniatures are beautiful. They are so dynamic, as opposed to the quite static, even boring poses of the old, official models. The Skinks are particularly cool!

They’re so gross! I love that they fit in really well with the look of the newer Nurgle miniatures, such as the Blight Kings. The Pestigors are nice, too. It’s great that GW is keeping up with the other producers.

Paizo starts taking preorders for Pathfinder 2nd ed. – I’ve never really gotten into Pathfinder. I wasn’t playing much fantasy RP for a long time and, by the time I got back into it, D&D 5e had been released and really suited my preferences in rules. I appreciate that many people really love Pathfinder, though. I’m sure many of these people are really stoked for the new edition: 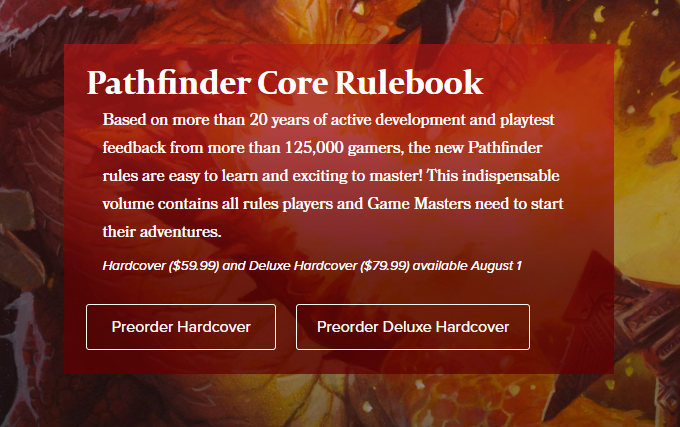 I know playtesting has been going on for a while and that folk are excited. Given the sheer volume of material out for the first edition, it must be daunting for some people to make the edition switch. I’ll be watching with interest to see how this edition goes. I’d also quite like to give it a go at some point, if only to see if it’s ultimately for me.

Games Workshop releases Our Martyred Lady Collection – One of the codexes I read for 40K back during second edition was for the Sisters of Battle. They were one of the first armies I really knew about in any detail. Although I’ve never collected an army of them they have managed to keep my interest decades later, and after 6 edition changes. Seeing a set like this is therefore pretty interesting: 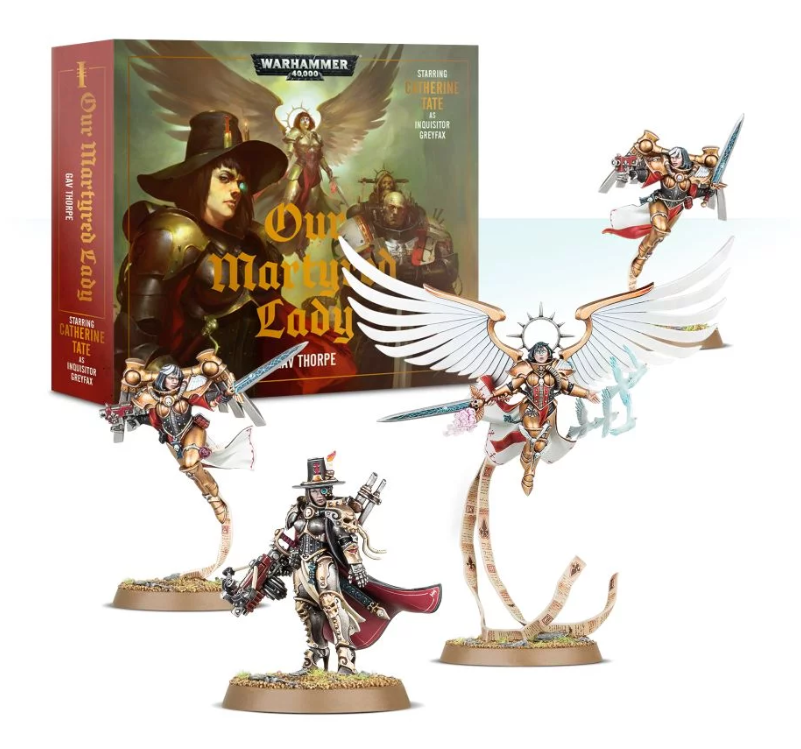 This set contains an audiobook of a Sisters-themed book from Gav Thorpe. I like his Black Library stuff, so I’d definitely go into this with some positive expectations. It also contains the Inquisitor Greyfax miniature, which is really nice, and the miniature for Saint Celestine and her retainers. I love the Celestine miniature. I’ve seen it in person at the local club and it really looks fantastic. This is a cool, thematic little collection that sets a nice tone. It also whets the appetite for the eventual release of a new Sisters army!

The new edition of Vampire is okay. I like some of the ideas, even if I don’t like them all. I’m still not sold on the photo-based artwork, either. I’m interested to read this book, though. The Anarch book, too. The Camarilla guide is one of my favourite books from Revised Edition, so my hopes are that this book will be just as indispensable in the fifth edition.

Drukhari: The Bladewife of Bathor Arena (and friends) @ The War for the End of the World – I continue to love seeing the cool, creative forces that people are putting together for Kill Team. This Dark Eldar (Drew Carey?) Kill Team is another nice one. I like the light colours used and I think they the different schemes really give the kill team some personality. I’m also always in favour of any article with lots of cool pictures!

Sticker Shock and the Indie Board Game @ Random Thoughts from Yuriko – Yes. Just, yes. These games are expensive. Bloody expensive. The author makes some good points, though, pointing out that flat cost is less meaningful than the cost versus the entertainment provided. They use the perfect example for me, in Terraforming Mars. It’s a game that is, by what you get the box, quite overpriced. That said, I really feel I’ve gotten my money’s worth and more. I have played dozens and dozens of hours of this game and I’ve loved them all. That cost per hour is therefore pretty low. Worth a read.

Getting Started with Age of Sigmar @ Can You Roll a Crit? – Not enough people play Age of Sigmar. I mean, you’ve got the folk who’ve never heard of it, or who would never have really considered playing a miniatures game, and then you’ve got the few remaining die-hard fans of classic Warhammer who are still hurt over the switch to AOS. It’s just such a good game, and it’s really cool to see articles like this that reflect on getting started in the game. The author covers a lot of different aspects of the game with a nice balance between sharing information and maintaining pace and brevity.

The Best Board Games for Number of Players You Have @ Avoiding Adulthood – This is another toplist, but with a useful focus on helping you pick games for specific numbers of players. I agree with the author on their love of Patchwork, Gloom, and Mysterium. There are a few games on the list, such as Fallout and Arkham Horror, that I’m keen to try out at some point. That aspect, of finding or being reminded of games to try, is what I love about these lists.

Skirmish Games Vs. Big Army Games @ The Drake’s Gaming Blog – This article looks at the pros and cons of skirmish games. These are my favourite type of miniatures games, mostly because of the smaller model count, more tactical considerations and the creativity that people unleash on their small, more manageable forces. I agree with pretty much all that the author says on this topic, though given that they talk a lot about the miniature, it’s a pity that they did not include a few images of the models in question.

This week on No Rerolls we’ve continued to maintain radio silence. Busy times!
Catch you later!