Cat’s Dream by Tobie Abad added to DriveThruRPG – I’m starting with an item I actually know very little about. The details on the DriveThruRPG page for this item are sparse, describing it only as a solitaire tabletop roleplaying game which draws some inspiration from the likes of Studio Ghibli. That last point is underlined by the beautiful cover art:

I’ve never played a solo RPG and i think that solitary play woukd rather defeat the purpose for me. I like the social aspects of these games. It does intrigue me, though… The only review posted on that site thus far drives the game 5 stars. I’m looking forward to finding a fuller review that really gets into the nitty gritty of the game.

Games Workshop releases Monsters and Mercenaries expansion book for Warcry – I finally got to play Warcry the other week and I had a lot of fun with it. I mean, I lost, but I try not to use that as a barometer for games, otherwise I’d never find a game I liked! 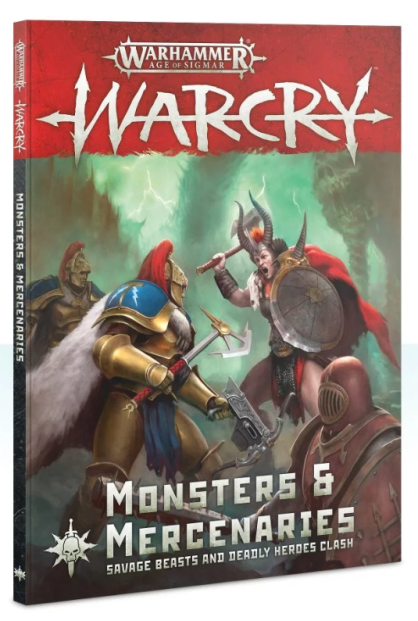 As they did with Kill Team, Games Workshop seems to be putting out book-based expansions for this game. I liked the books for Kill Team so this is alright by me! I like the look of this book, especially the mercs. I also like that they’ve brought back a plastic version of the Chimaera model for use in the game. It’s pretty nice.

The Book of Unusual Potions available on Kickstarter – This is one of those RPG products that picks one narrow aspect of the game and really drills down into it. You know, pick one thing and do it well? In this case, of course, It’s all about potions:

There’s not a huge amount more to say, really. This is a detailed treatise on using potions in your RPGs. It’s system-agnostic, so you can bring it into lots of different games, too. Oh, and there are only a couple of days left in the campaign, so if you’re interested you’d better get on it!

Osprey releases Gaslands Refuelled – and Osprey game is always a cause for celebration! I might find some of their military history books a little dry, but they continue to go from strength to strength with their wargames. This is not a new offering, but rather a revised and expanded edition of Gaslands:

Gaslands is a game that had seen a little bit of play locally. It’s also a game I’m keen to get to the table myself. It’s very Mad Max, focusing as it does in post-apocalyptic vehicular combat. If this edition brings more to the table than the original then it may be worth using this as my jumping-off point.

Wizards of the Coast releases Baldur’s Gate: Descent Into Avernus book for D&D – It’s kind of inevitable that I’m going to pick this up, isn’t it? I’ve picked up every book for this edition, so I’m hardly going to stop now, right? Luckily this looks really good, so I’m not just buying out of a sense of completionism. I mean, I am buying out of a sense of completionism, but not only that.

Firstly this will be the first book to really feature the city of Baldur’s Gate in this edition. That’s cool. I’ve also heard a lot of good rumblings about the Avernus content that sees the players basically descend into hell. Some of the previews and interviews from Wizards of the Coast have really whet my appetite on that front.

Everybody all the Time @ Mondo Davis – I like Jamey Stegmaier, owner of Stonemaier Games.  I like the games put out by his company, his regular posts about running successful Kickstarter campaigns and his thoughtful posts about the games industry.  The author of this post seems to agree.  As an aspiring games designer, the author is particularly impressed by how accessible Jamey is, and how willing he is to give advice.  He’s good people.

A Look Back at HeroQuest @ Ghosts of the Stratosphere – this is a pretty thorough, detailed look at the history of HeroQuest, a classic adventure board game from Games Workshop. HeroQuest was never really a big deal for me. I’ve played it a fair bit and, at the time, it was a solid game. The reverence people hold now is surely based on nostalgia, as it has not aged particularly gracefully. That said, this article is a work of love, really drilling down into the detail and sharing the history of a pretty important game.

Board Game Top 10 – Budget Games for Broke Blokes @ Bored Gamers and Board Geeks – I like the occasional top 10 list. This is the type of list I particularly like, where I agree with most items on it – especially Coup and Star Realms – but habe not heard of some of the others. It tells me that this person has similar tastes to me and that these unknown titles are probably worth checking out.

Fate Accessibility Toolkit Review @ Cannibal Halfling Gaming – Cannibal Halfling Gaming is good at detailed reviews. I’ve inked to such articles from them before and I read their blog pretty regularly. The FATE Accessibility Toolkit is something I highlighted wheb it came out as being pretty interesting. I play regularly with children with various disabilities and advice is always welcome. I particularly agree with the author’s observation that one of the problems highlighted by the existence of this book is that it is unique. It stands alone. It’s the only one of its kind. Why is that?

Tabletop Scotland 2019 @ Glitchfree Gaming – I have previously shared my thoughts on Tabletop Scotland 2019. It was a great show! The author of this article now does likewise. Tjis is a pretty in-depth summary of the event with some nice pics. Glad to see others enjoyed the show as much as I did!

This week, we’ve taken a look at some more Warmahordes themed forces and posted the first of our new monthly Throwback Thursday articles where we take a look at some good content from previous years.