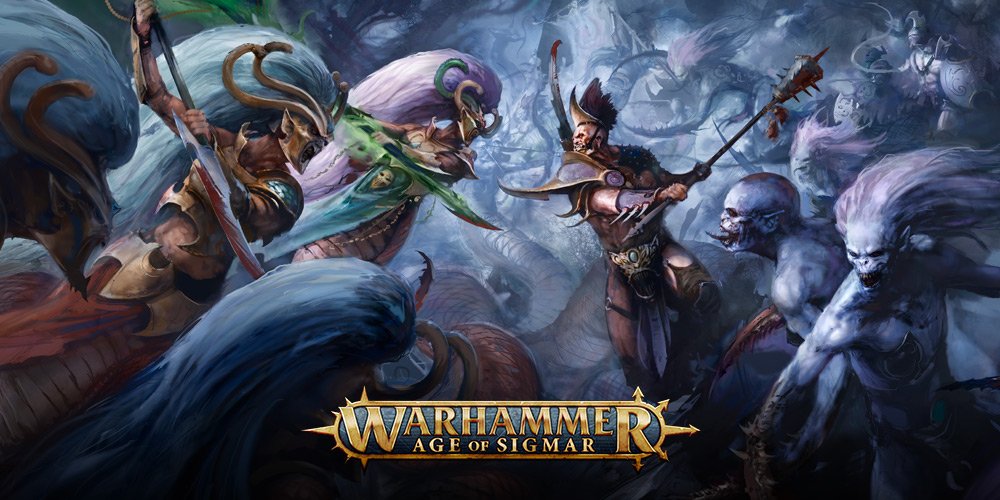 Games Workshop releases Shadow and Pain boxed set for Age of Sigmar – Of the two core games from Games Workshop, Age of Sigmar is by far the more interesting one. I mean, there’s just actual variety in armies, rather than mostly power armour in different colours that, inexplicably, each need their own rulebook. The latest 2 player set for AoS is the very cool Shadow and Pain boxed set:

It’s funny, I don’t know if it’s one I’d pick up or not. I love all things Chaos, so Slaanesh does appeal to me to some extent, and all of the Slaaneshi units are very usable. Daughters of Khaine are also a beautiful army with those cool snake-ladies and Morathai, one of my favourite characters from Warhammer Fantasy, reincarnated in a massive, winged, snakelike form. Resist!

Volume 2 of BLASTER now available on DTRPG – Now, this is interesting. BLASTER contains a number of expansions to indie tabletop wargames. I like the idea of the anthology, and I think the series, of which this is the second instalment, has a lot of promise:

Now, with that praise out the way, I likely won’t be buying this. I think it’s a great product for what it is. I think it’s really good if you’re someone who regularly gets a wide selection of indie games to the tabletop. For me, who struggles to get these games played, I’d be looking to pick and choose the expansions that I want, rather than paying the full price for everything. That price is not huge, but it’s a lot for what this is, especially if you’re looking for a physical copy. So, yeah, interesting, cool, but ultimately not for me.

Tabletop Art releases fantasy football stadium benches – With the new edition of Blood Bowl set for release very soon, it’s time to accessorise! Add some seating to your stadium with these benches. They come in several different designs and will add that little extra detail to your experience.

There’s not a huge amount more to see about these, to be honest, they kind of just do what they say on the tin!

Kobold Press releases Tome of Beasts 2 on DTRPG – Yes, you know I love Kobold Press and that I will definitely be picking up a physical copy of this book. For those who eschew the physical, here’s the PDF! Truly, I am looking forward to picking this up:

The original Tome of Beasts sees a lot of use in my games, particularly with my after school group, where they like it when I throw strange, new creatures at them. I firmly maintain that Kobold Press put out well-produced, high quality books that rival any other company, especially those dealing specifically with third party content for other people’s games. Much excite!

It’s a little more expensive, but still very reasonable. It still has the flip mat, pawns, sheets, books, etc. This is exactly what was needed for second edition; an update of the original which keeps all the features and functionality that made the first set so great. Ruleswise, I don’t see myself playing Pathfinder, so I likely won’t pick this up, but if you’re at all interested in playing the game, then this looks to be a really great set.

Games Workshop Contrast Paints: Part 4 – One Step Beyond. @ The Sentry Box – I love posts like this, where you can really see how versatile the contrast paint range really is. The fact that it’s combined with Infinity miniatures makes it even better for me! Two things I love in one place? yes, please. I need to go back and read previous instalments in this series, methinks.

Impression of Dishonored @ Hours Without Sleep – I like the 2D20 system… or at least I think I do. I’ve yet to actually get a go of any of the games that use it, but it reads well. I’ve been fooled before by games that read well but didn’t play so well, so I’ll withhold judgement for now. This review makes me want to ensure that I get such a game going soon – whether that’s using Dishonored, Star Trek, or Infinity.

A Canoptek Reanimator and Other Necron Progress @ Workshop of the Microscopes –  These. Are. Beautiful. Theblack looks great, and then the pink just pops. It contrasts so well, so beautifully… I also love the bases which, again, are lovely and bright and just pop against that black. Truly, these are stunning.

3D Printing for Games – Part 1 @ Four Day Weekend – I think this is the start of what will be a good series on 3D printing for games. This introduction is very much for absolute beginners, but this is the sort of information that is needed, and it’s handy to have it all in one place. I’m keen to see where this series goes.

Interview with the Team Behind Werewolf: Savage Age @ Mephit James’ Blog – Interesting. I hadn’t seen this supplement before, but it looks really cool. It’s also quite different. I’m not sure that I’d use a prehistoric setting for a game of Werewolf: The Apocalypse (20th Anniversary Edition), but I like that it’s there, if that makes sense? The writer of this article got a really cool interview with the writers behind Savage Age, and it makes for a pretty interesting read. Take a look, then pop over to DTRPG and take a look at the supplement.

This week, I have not added a new post or article, but I have done a new page. This page is one that highlights content about my local gaming club. In the coming week, there will be a big chunk of content about the club, as I post the entries for a contest that we have been undertaking. Stay tuned for that!