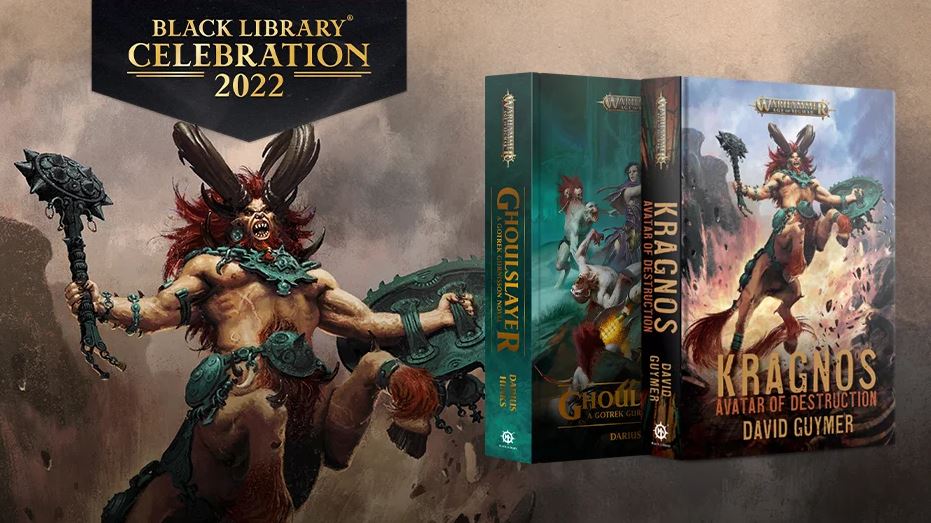 Black Library releases new Kragnos novel – I love the force of destruction. I currently have armies for three of the four factions and I’d like to do the fourth at some point. When doing my Sons of Behemat army, I also painted up the Demigod of destruction himself, Kragnos. Now, Black Library is putting out a book based on the baddest boi:

I’ve still not read any Age of Sigmar novels. I keep meaning to, but there’s always something else at the top of the pile. I think I should. I like the Age of Sigmar background and I’d like to pad out my knowledge and really get into more of the stories. Yeah, this might be a good place to start.

Onyx Path releases They Came From Beyond the Grave on DriveThruRPG – I’m a wee bit late on this one, but I’m sharing it because I think it’s gonna be great. A couple of years ago I got to play They Came from Beneath the Sea at Tabletop Scotland with the writer, Matthew Dawkins. This was a lot of fun. He mentioned at the time that they were likely to expand out into more genres and I’m so happy to see this happening with They Came from Beyond the Grave:

The core concept behind this game is pretty similar to that of They Came from beneath the Sea, in that it’s a fun, campy B-movie-esque experience. It’s just got more of a focus on old horror movies, The Storypath System is also a pretty solid foundation for the game. This won’t be an immediate purchase for me, but if I can get a game or two of They Came from Beneath the Sea under my belt, then I’ll likely follow up with grabbing this as well, via DTRPG’s print-on-demand service.

There’s not a huge amount to say here, really. It’s a wee pack of star players/secret weapons for your Blood Bowl goblins. I do love using the Fanatic, though I’ve less experience with the bombs. I love that the Fanatic is really reminiscent of proper, old-school Warhammer Fantasy!

Thay: Land Of The Red Wizards now available on DM’s Guild – The DM’s guild continues to fill up with more and more interesting stuff. There’s more and more dross as well, but this particular offering would definitely not be one to dismiss so easily. Thay is an area of the Forgotten Realms. It is a magocratic nation in the East. It’s also an area that hasn’t really been touched upon in 5E Dungeons & Dragons. Where Wizards of Coast does not tread, enthusiastic fans will:

This is a significant, if not substantial, 108 pages of content on this sinister, magical land. I don’t really know enough about the setting, or the content of the book, to really know how wholeheartedly to recommend this. I do like the art in the preview, though! Beautiful. For the length of the PDF, it does feel a bit expensive, though. Ditto for the PoD options.

Mantic previews their upcoming Umbrella Academy board game – Okay, so regular readers will know that I have a bit of a mixed view of Mantic. They’re actually a pretty cool company, but I find a lot of their stuff to be quite hit or miss. Some of it looks incredible, whilst some is downright atrocious. Most of it falls somewhere on the spectrum between the two. I’m pretty excited to see this preview, though:

Hey, Umbrella Academy! That’s great. I really like the comic and the show. Both are really good, and I’m happy to see some cool licensed stuff like this appearing. The game itself looks fine. I’m sure it’ll be fun. What I’m really excited about are the miniatures:

I love these. I’d have been happy if they’d based their designs on the TV show. I’m delighted that they are instead basing them on the comic. So much more iconic. They’re going to make it really difficult to resist this purchase!

Cursed City: Vyrkos Blood-born @ Scent of a Gamer – As discussed this week, I’ll be cracking open my own copy of Cursed City in the near(ish) future, so it’s nice to see some cool examples of finished minis from the set. This is especially true when it’s from a blog I already enjoy, These look great! I especially love the greenish hair. I like it when miniatures embrace nice, bright colours. There’s a place for grunge, but there’s also a place for fun and whimsy, and that place is the Mortal Realms!

Underrated Wargames – Grant’s 5 Most Underrated Based on Board Game Geek Ratings @ The Players’ Aid – I like the idea of wargames, but can struggle to get them to the table. There don’t seem to be too many takers for my various GMT games. Oh, well. I like this list because most of the titles were previously unknown to me. I’ll have to look into them. The one I was already aware of is Fields of Despair. I actually know about it because I read about it on this very same blog back in 2017. It sounded really good.

Top Three AOS Lists from the Emerald City Open @ Woehammer – This is a good series from Woehammer. I found myself quite interested in most of these lists. The Be’Lakor list seems quite fun, and I do love me some Daemons. I also found the Beasts of Chaos list really interesting and I’m so happy to see that army doing well in some events.

Taking Stock @ Spalanz – I’d like to do this sort of post next year. This is assuming that I can get a few more projects a little bit further along and I feel less shame! It’s cool to see someone’s various projects laid out like this, and it’s reassuring to see it’s not just me who spreads himself over quite a few projects at once. Really cool post.

D&D ̶M̶o̶n̶s̶t̶e̶r̶ Hero Manual 69: Adventure Boardgame Heroes – Vistra, Barrowin, Cattie-brie & Thorgrim @ Azazel’s Bitz Box – I love the variety of different minis that you see getting painted up on blogs like Azazel’s. These are four cool, fun adventurers. All are well painted and my favourite would have to be Vistra. She’s a chonky lass who clearly means business. I do have to agree with the author that Catti-brie is a pretty horrific sculpt, though.

On No Rerolls this week, I shared a wee review of the Green Stuff World textured rolling pins. I then expanded on a previous wishlisting post by properly and fully planning out a themed Soulblight Gravelords army that I may or may not have since purchased the initial units for… Spoilers: I did.