Between the books and resources from Wizards of the Coast and the huge amount of adventures and supplementary resources created by third-party companies and enthusiastic homebrewers, there is a lot of content out there for the 5th edition of Dungeons & Dragons.  This bundle captures some of that content, bringing in a ton of monsters, maps, treasures, location, and adventures.  I love this sort of content that can be incorporated into lots of different adventures by an enterprising DM.

So let’s take a look, shall we?

That’s another of those rhetorical questions.  I’ve already written up the rest of this post, so a ‘no’ here would be pretty frustrating.  I’m just going to press on with it either way. You back?  Right, let’s take a look at what you bought.  I won’t look at it all because, I mean, there’s so much of it.  I’ll pick out some of my own highlights.  There are a handful of Adventures from Frog God Games.  I’ve not read these, but I have picked up a few of their PDFs recent and I have enjoyed them.  The 30% off coupon is also really good, giving you a potentially huge discount at a number of great stores for that paltry $1 price tag.

The second tier costs $8.  For this, you will get everything in the previous tier, plus the following:

Again, this is a lot of content and represents really good value.  There are, again, a few real highlights for me.  There are more Frog God Games adventures, as well as the Book of Taverns, which gives you some cool bars and inns to drop into your own games.  I also like the idea of the Fighter Folio from TPK Games, being a detailed treatise on one specific class.

The third tier costs $15.  Again, it includes everything in the previous tiers and adds a ton more stuff.  The new additions at this tier are: 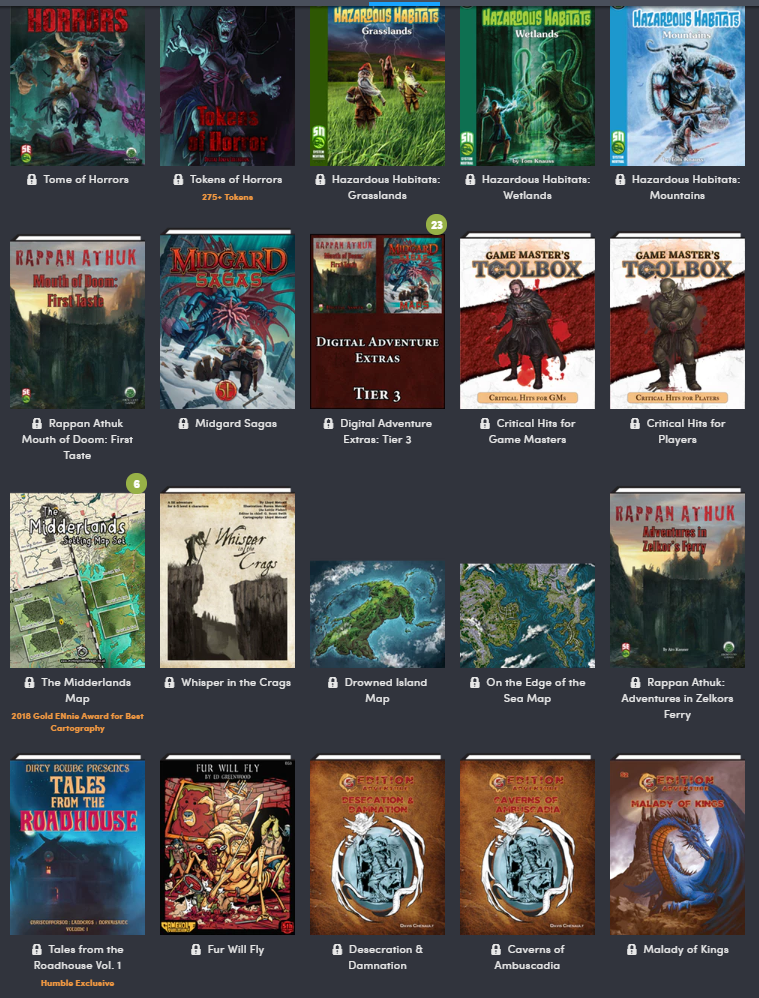 The biggest highlight in this tier is, for me, Midgard Sagas from Kobold Press.  I have a physical copy of this book and I really like it.  It’s got a great selection of adventures for Midgard games, but which could easily be dropped into other settings, either in part of wholesale.  I also really like Frog God Games’ Tome of Horrors.  This is basically a bestiary themed around some really horrific monsters, often accompanied by some rather creepy artwork.  This is a fantastic and lengthy book with a lot of premium content.

Looking at the bundle as a whole, there’s a fair bit of content that does not really excite me, but there are some really strong titles as well.  The Frog God adventures are usually a safe bet for a good game, as are those in the Midgard Sagas book.  The Tome of Horrors is really strong, with a lot of creepy and disturbing creatures.  The other books may not immediately jump out at me, but I’m always hopeful that something will surprise me in the reading and I’ll find a real gem.

The bundle benefits the RAINN charity, supporting abuse survivors and helping to get people out of some really horrible situations.

You can click here to visit the bundle page over at Humble Bundle.  I’d say that the first tier is definitely worth buying and it’s up to you to weigh up the value of the later tiers.  There are a couple of real heavy-hitters in that third tier, though…

2 thoughts on “Humble Bundle: 5E Beast of a Bundle”